Focusing on the XVIIIthe century, our goals is to rework both Campaign and Battle gameplay to offer a more immersive and historically accurate experience of the game.

For each faction, and according to historical sources but in the limit of the game engine, we intend to :

Moreover, we intend to :

To reach all these goals, we need help.

We are searching for modders to join our ranks. 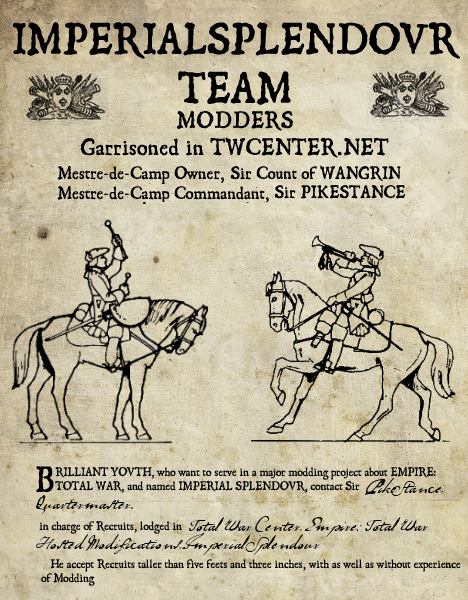 WHO ARE WE SEARCHING FOR


We are specifically looking for 2D artists to complete units for the three time periods.
However, being capable modding the following would be most ideal.

2D artists could have to create :

3D artists could have to create :

NOTE : We can not yet create new Battlemap building, at least garrisonable one, but it is possible to create new non-garrisonable buildings using TW:S2 Assembly Kit, because TW:S2's cs2.parsed file can be reused in ETW and NTW.

DB editors could have :

IMPORTANT NOTE :
If peoples have knowledge of LUA and C++, it would be possible to expand W.A.L.I abilities, particularly to create a "true" unit evolution system that replace "obsolete" units by new one when reaching a "Army reform" technology.

You can have a look to what is expected by visiting :