Adding non-stylized traditional fonts with an emphasis on readability over thematic appeal.

There's a reason "terminal" fonts are a standard for traditional roguelikes even today. Certainly tradition plays a part, but even more importantly, they're designed to be highly readable.

Last year while still in pre-alpha Cogmind received a huge influx of font bitmaps to support different resolutions, in some cases with multiple variants at a given size. At that point the goal was to make sure Cogmind had a unique look that was also consistent regardless of resolution (or as close as possible given the difficulty of pixel-perfect scaling that maintains proportionality).

With the alpha launch behind us and hundreds of players diving into the game and providing feedback, the first few releases were/are aimed at quality of life enhancements--tweaking the interface and adding optional features that will improve the experience for even a minority of players (because the options menu is not already crowded enough =p).

By far the top request is to improve readability. A majority of players enjoy and prefer the Cogmind's original font, but a number of factors contribute to poor readability for some players:

We can resolve these issues for most players by providing thicker fonts with more even pixel distribution, as well as multiple options at each size to suit slight differences in personal preference. These alternate fonts will lack the thematic appeal that we get with Cogmind's sci-fi font, but accommodating players is more important--readability trumps all in a text-heavy game. Besides, they're optional :)

With single words and short phrases readability is less of an issue. The biggest problems arise when reading log text, hacking results, and dialogue where there are full sentences and paragraphs to parse, so that's the best test of readability and what I show below.

This font comes from a common Linux windowing system. You can find a huge collection of bitmaps and even the source code for producing them here. Of the new fonts, X11 might be the easiest to read overall as it's the most traditional of the bunch. 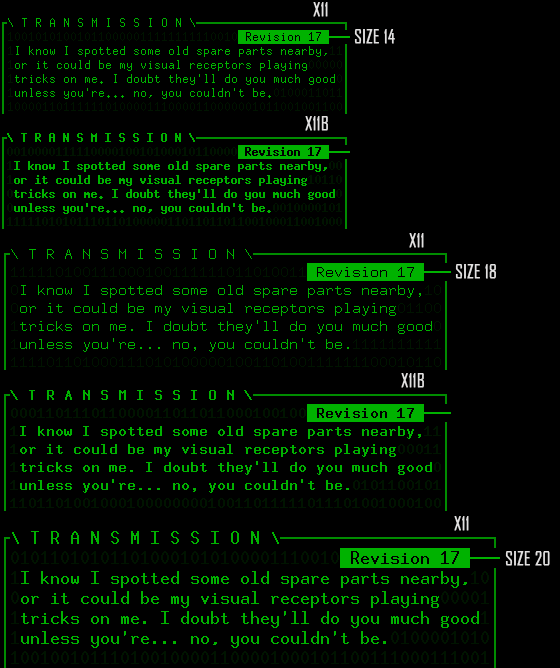 For Cogmind, I like Terminus for its natural readability with a shape that still preserves some sci-fi flavor. See many more sizes and optional features of this typeface here. 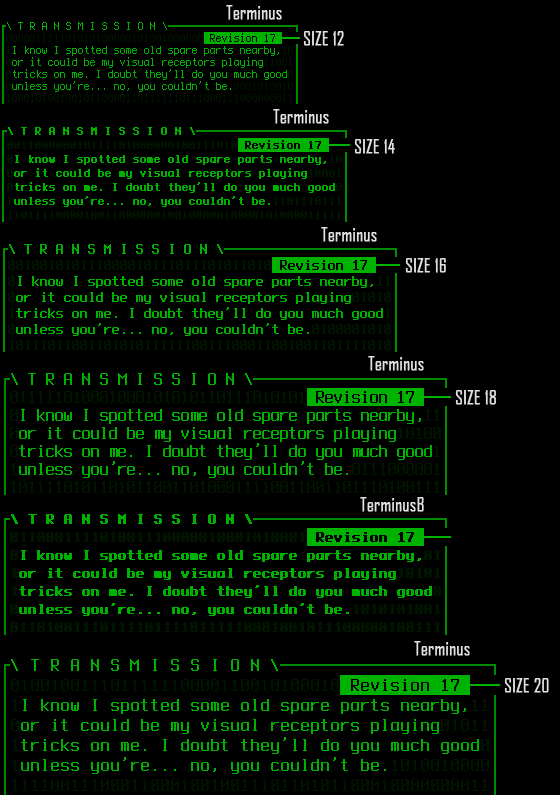 These fonts will be familiar to many programmers, as they're commonly used for coding. Programming fonts are a natural place to look for good roguelike fonts, since they're both monospaced and designed to facilitate character recognition. 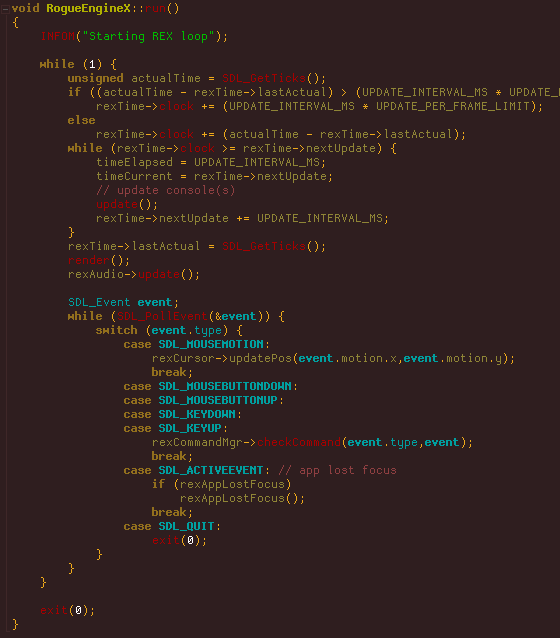 Cogmind's entire engine loop as seen in the IDE (VS2010). I've been using Dina

as my coding font for about eight years.

Adding these to the game was simply to provide some extra options at smaller resolutions, which they work best at. You can see the full selection of Proggy/Dina fonts here (all by the same author). 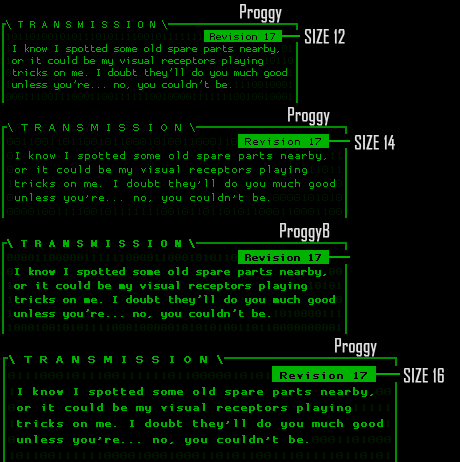 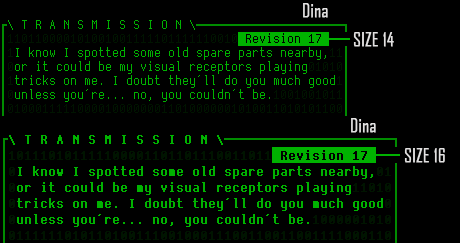 As of Alpha 2, Cogmind comes with a mind-boggling 82 font bitmaps.

Showing some of the fonts in action via the options menu.

For comparative images showing all the new fonts grouped by size, see this forum post. (There are also many larger sizes available for resolutions at and above 2K, though all are derived from fonts shown above.)

The above fonts seem to have solved the readability issue for most players, at least those for whom their resolution-limited size is not simply too small regardless of font (and therefore requiring a larger screen to select greater sizes).

More typefaces can easily be added, though I think the current set combined with what was already there is enough to cover most needs. (The new fonts come with Alpha 2, to be released soon, though they were pre-released separately weeks ago in the forum post linked above.)

For those of you developing your own roguelikes, another nice option to consider is an amazing customizable font named Input.

This is the fourth in a four-part series on roguelike fonts:

I like 16 Terminus a lot as well. Used that in an animation capture I showed yesterday and it worked really nicely: Twitter.com