I've been waiting for awhile to be able to push this one out, but Ensign-1 finally supports working multiplayer with co-operative play and randomly created worlds. I won't bore you with long text right away, so here, a video!


Each time you start a new server, a new space gravity well is randomly generated. Each generated gravity well will have a hotspot for players not far from the Ensign. Either an enemy station, a ship, or a starbase. This hotspot will optionally be surrounded by asteroids or ice crystals, as well as randomly generated space clouds (whatever they are, they look cool, shut up), and planet and sun positions. In addition, each area will start with a random number and placement of enemy ships. But look out!, as these ships will continue to randomly spawn in as long as players are present. So if you decide to battle it out amongst friends, expect some hostile AI interference before too long. Future versions of the server will let admins optionally turn these enemies off. 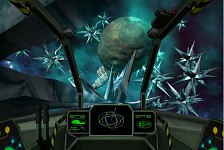 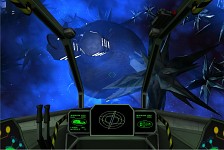 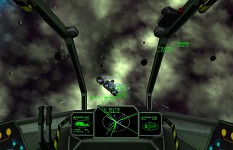 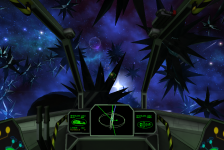 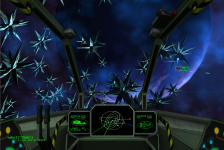 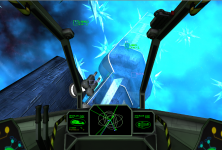 Future plans are to continue the path that the multiplayer is on. Work on smoothing out and fixing up the FPS play in multiplayer, and then moving on to more online features. Soon, I'd like to bring in a goal for the online portion, and the ability to upgrade your starting fighter and equipment, either through rank or money, or both. I'd also like to start bringing in those other player controlled factions into multiplayer, letting players either join the pirate or alien factions as well.

So stay tuned for the next update!

I really love that you let us actually walk around the ships and see whats going on.
Thats something I'v always missed in other spacegames. Combined with coop it's even cooler. Hell yeah!

I hope we're going to see some really big pilotable ships, where you can man different positions with your friends, or even just meet inside the ship.

Pilotable carrier-ships would be most awesome for that.

The addition of coop/multiplayer seems to be exactly what the game was lacking. Keep going guys, I'm sure you can draw alot more attention to the game with a well working multiplayer.

Having other players around always makes things alot more interesing.

Just think of freelancer which still has alot of active servers, even after all these years.

ps.: You don't seem to have a website yet, do you?

Right, indiedb is more or less our website for the time being.

I don't show it in that video, but you can meet up inside the Ensign-1, the huge capital ship. One person can pilot while others man the turrets and such as well.

Is there any possibility there will be even a short demo? I know it's in alpha right now, but with something like space shooters the controls and feel is so essential that I don't want to buy before trying it.

Right right, it's something I've been thinking about. I can't promise anything, and I kind of feel like a large part of buying a game in alphafunding, is just to support it's cause, even if it's not what you're hoping for right away. Still, I have been considering putting out a demo, and I'll let you know when I do.

The issue is of course, just that the game is changing so rapidly, that I've held off putting something out that would be out of date soon after releasing it.

Yeah, I know, and I do want to support it, just like I said with this kind of game it's an important part, and I don't think if it feels off to one person that you'd change it, if it feels good to others. :)

Definitely watching though. If I stumble upon some money I'll buy it just to support though. :P

EDIT: Are there any plans regarding custom content, perhaps?

I've talked with some people, and I think I probably will try to put out a demo before too long.

As far as custom content, the in game editor is included. So someone can make custom maps if they'd like to.