For the next patch, I'm finally working on new features beside the bug fixing. This post explains how one of these new things will work.

Hi everyone! The second group has also been invited, and things are going surprisingly well. Of course, there still are lots of bugs (some of them even created in an attempt to fix other bugs), but most of the bugs in the bug reports I'm receiving can be fixed easily.

For the next patch, I'm finally working on new features beside the bug fixing. It's been months since I actually added something new; I've spent the last months fixing stuff, making everything a bit more user friendly and integrating it all with Desura! As for the new functionality: my original plan was to add a large battleground for four players, and I actually already have a lot of art and code ready for that, but I decided that Olvand's player base might not be ready for something so big yet - I've rarely seen more than three people online at the same time. So therefore, I'll focus on two smaller minigames. They're not teambased (which is what I'm mainly interested in), but it'll give the players something to do. This week I'll reveal the first one, which is:

The little scooters you can build are the most popular part of the game by far, so I figured it would be nice to do something with that. In the build I'm working on, players can create flags, which can be put into the ground. 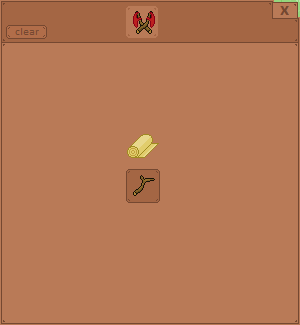 These flags in the ground can then be added to a so-called track. Each player can own one track per server. All players owning a track can start a race (using the new game tab!) on this track, which others can join. Once the organizer hits 'START', the countdown will start, and then the players have to drive to the flags in the right order. The one who reaches the final flag first, wins. I expect some problems, because with the current controls it'll relatively easy to do some races 100% efficient, which will mean multiple contestants will arrive at exactly the same time, but I'll balance that later.

People who beat me