Lots of new mechanics are being added for the upcoming quests getting properly and vividly manifested in the game world. We're hereby highlighting three recent additions; terrain intelligent NPC given directions, learning skills from NPCs and ordering crafts from NPCs. And what's the best of it all, all the new mechanics will be very beneficial for the whole UnReal World even with ordinary, non-quest related gameplay.

The main focus of UnReal World development is currently in implementing quests. We're not taking the easiest path to add them, but use verbose dialogue, procedural generation and randomization to maintain replayability and immersion. And we're not creating all the new quest related features solely for quests, but try to make them universal so that the new mechanics can also enchance ordinary, non-quest related gameplay. Let us highlight three recent additions. These were born out of quest requirements, but will benefit the UnReal World as a whole.

Many times NPCs give you directions to quest related wilderness locations. Even though there will be quest related markers it still can be really hard to find the exact location in question. I discovered the problem when playtesting some quests. Yeah, go find something on zoomed in map within 3 kilometer radius of approximate location. Well, it can be done but it's not fun. We needed to add descriptions about landmarks and terrain types to NPCs verbal output about locations. Having to scout several zoom maps to find certain locations may still be required, but this sort of terrain type information made it far more plausible to restrict your searching only at relevant areas: 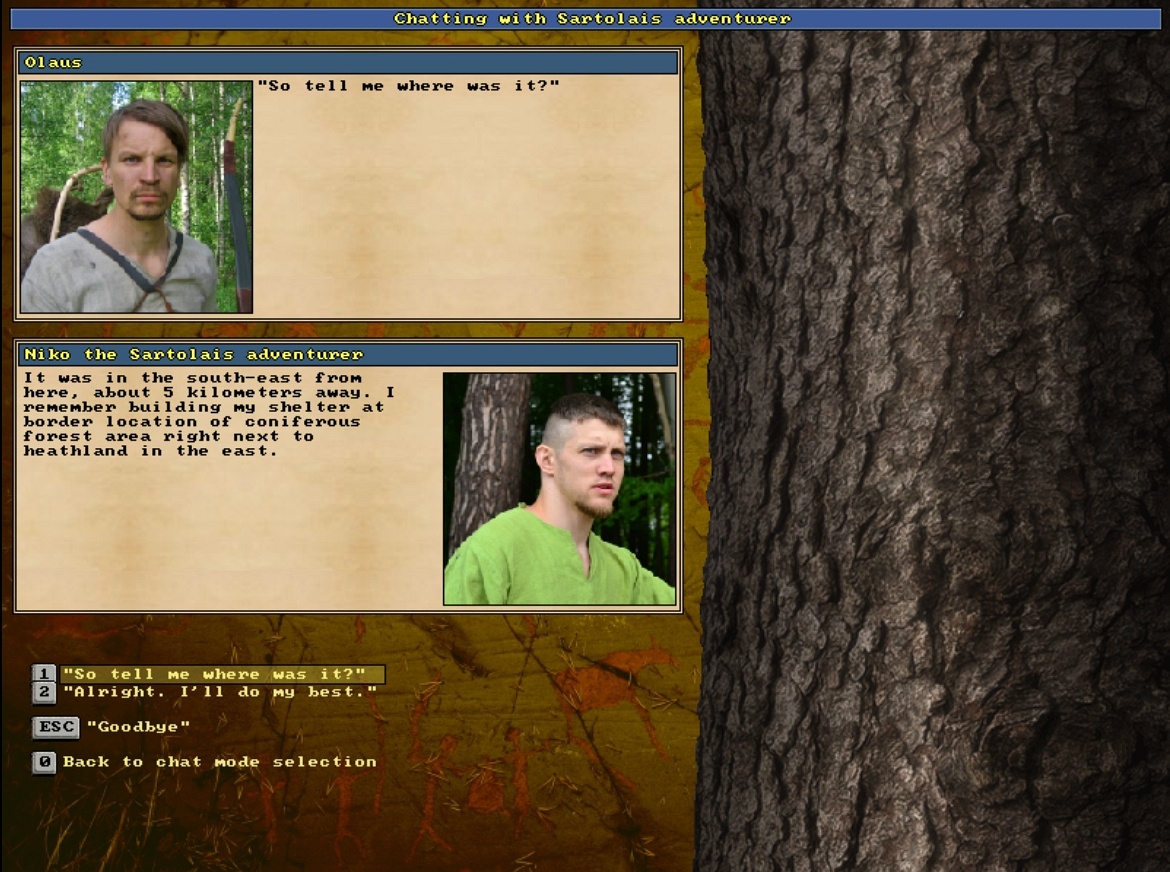 In addition to concrete quest rewards, you may also get rewarded with information or knowledge. Being able to learn skills from NPCs has been on dev.plans list for quite some time, and now it's implemented in a form of quest reward. NPCs can reward you by sharing their knowledge of certain skill. After having been taught, the skill in question will improve with 3-6% points the next time you use it in true situation.
For example: 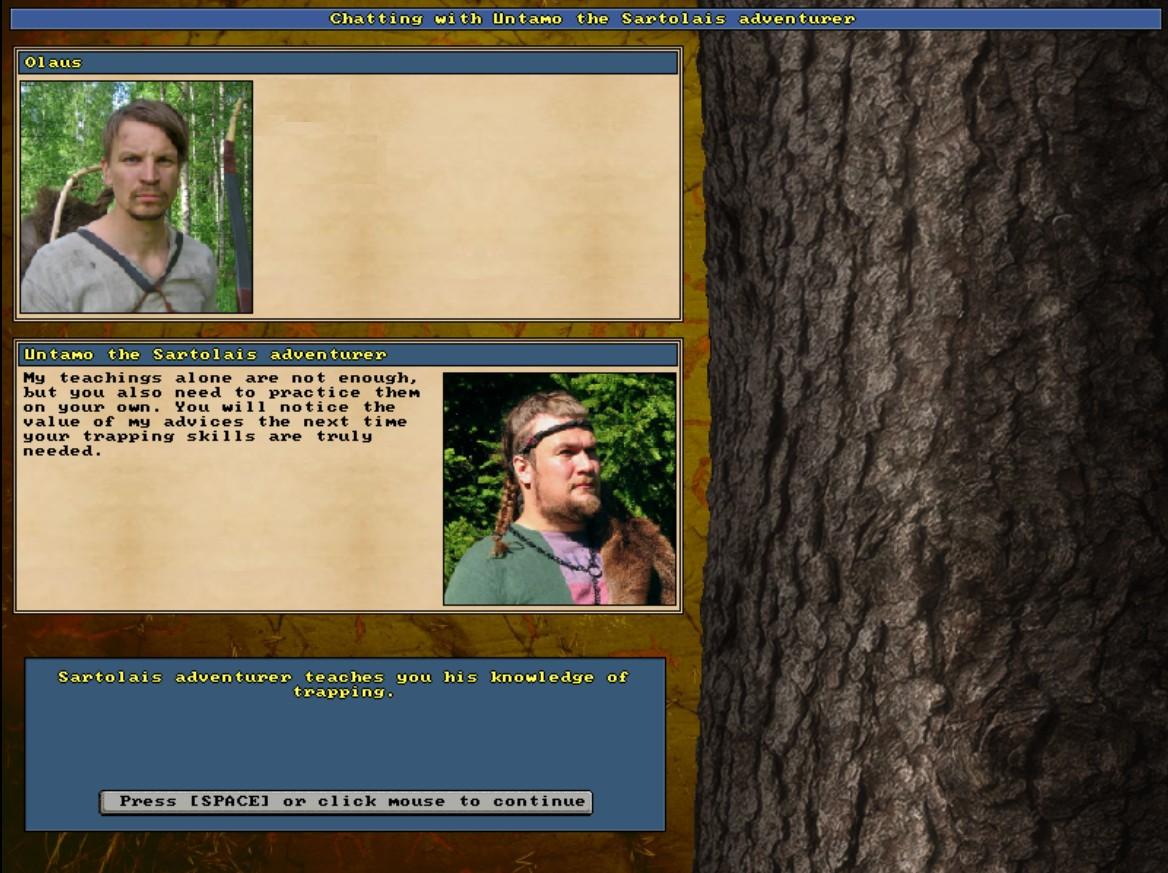 Some quests require bringing something to some NPC who will then make something else out of it. If I had been only thinking about quests this could have been created far more easily than what eventually came out of it. Give something to NPC and he/she gives something back. But that would have been all too gamey. Instead, there's now a preliminary but already functioning mechanics for crafts to be ordered from NPCs. In the quest this mechanic was implemented for, you bring raw materials to NPC, and he starts crafting something out of them. This may take several days. And you if you like, you can actually witness the NPC meandering at his worksite until nightfall, then going to sleep and returning back at his worksite in the morning. Even if this mechanic is currently reserved only for certain quests, in the future we could have characters order various crafts from NPCs.

Static screenshot doesn't tell all that much, but here's an old forester man at his worksite carving a punt on character's request: 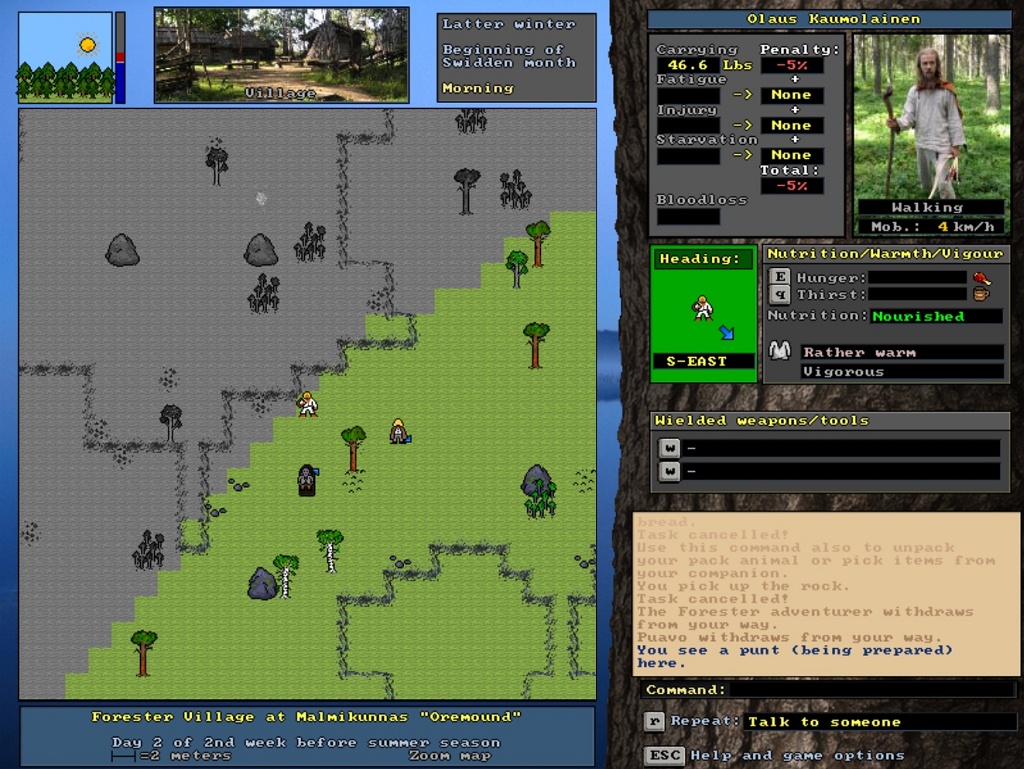 Working on quests will continue for unforeseeable period of time, but you'll be kept updated with tidbits, examples, and stream of quest coder's consciousness. Stay tuned for more - and feel welcome to join at Official Unreal World forums for good talks and frequent tidbits about ongoing development.

UrW is being developed with your support.
This could be a good day to utilize your squirrel hides and
donate to support UnRel World development