Ritus is getting ready for a demo release before December. I got a lot of the RPGish stuff in this weekend, including some new equipment, the ability to use consumable items, and obtain items for completing a quest.

I've decided to do weekly updates if anyone hasn't noticed. My day job is getting a little in the way, and I'm not in a position to neglect it, so I do most of my work on the weekends. So from now on you'll be seeing an update every Sunday around midnight.

This week I've added a lot of the more advanced mechanics: Quests, Items, and Equipment Stats are the major things. The Quest flow is pretty much complete and I've started with 3 generic "Kill X Things" quests just to test loot dropping and the quest stats system. 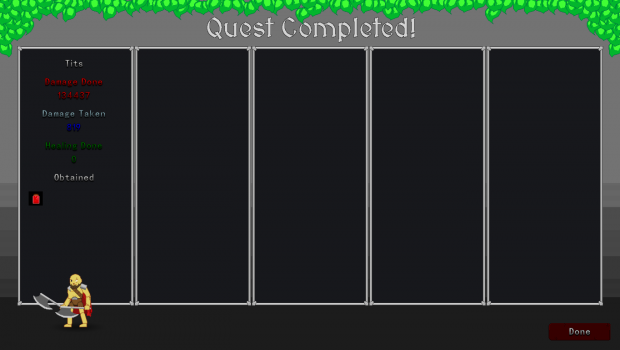 I'm really sorry about the foul names, but I created this character at 4 AM this morning.

Also on the quest completion screen will be quest achievements, called Charms. Each charms will correspond to your character type, so Mystics will get a quest charm for not letting anyone fall below 50% health for more than 4 seconds, Knights will be awarded a charm for never losing aggro on a boss, and so on. These charms will award a small amount of bonus experience at the end of a quest to reward people for playing safely. 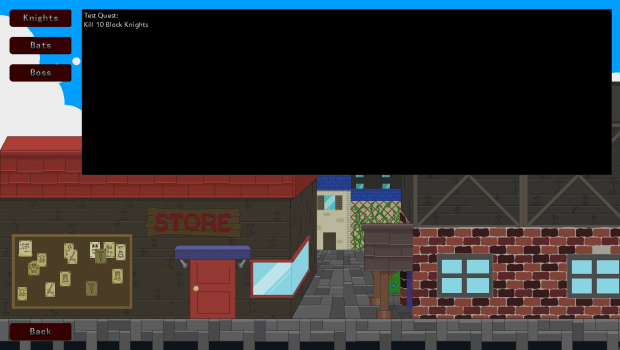 I didn't even try to put effort into the quest select, I just wanted it functional right now.

I realized that if I had small quests that were completed quite easily, I wouldn't realistically be able to hand out new gear for every one. So I added in a usable item system, where I could give cool, small, temporary rewards to players for completing some of the easier quests and save the awesome new equipment for boss battles.

These items will range from regular old health and mana potions, to full on spells of their own. I left the implementation of these wide open because I'd like to make them vary a lot. You could have a potion that gives you bonus attack speed for a short time, an item that will heal all the players in a radius, that will knock all enemies away from you, add fire damage to your weapon, or anything really. These are meant to be kind of secondary abilities that anyone can use and I have a ton of cool ideas for them.

You'll only be able to take 3 items into a quest with you, and they'll be consumed after you use them. So you have to choose pretty wisely which ones would best fit a fight. 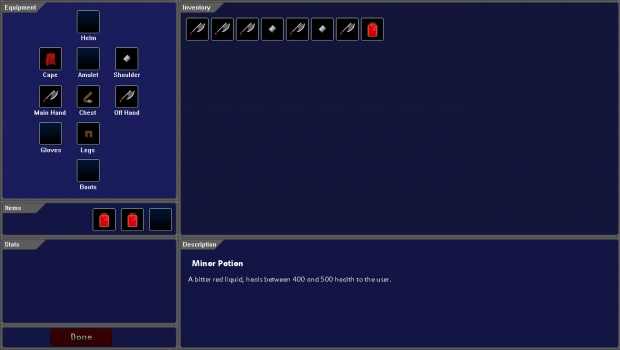 This inventory screen looks more and more gaudy the more I look at it.

This week I'm going to hit gameplay pretty hard. I have a little list of things I want to do, but I'm really reaching to release a demo with only the clock tower stage and a few generic quests next week. I really want the Steam Knight boss (shown in earlier screenshots) to be in there and fully functional as well. If you want an exact date, my birthday is next Tuesday (the 27th) and I think it would be a blast if people were playing the demo while I enjoyed my day off.

I've started making some new equipment as well, and I might post in the middle of the week showing some of it off.