Nobody likes silence, so our aim now is to start being more consistent and give you guys more regular updates. Starting now we're going to attempt to give you guys quarterly updates at least, this being the update for Quarter 1 of 2020.

Yo yo, guys, gals & nonbinary pals, how's things? Bet you weren't expecting to hear from us again so soon, huh? Well, we hope to start breaking away from our track record of silence. Nobody likes silence, so our aim now is to start being more consistent and give you guys more regular updates. Starting now we're going to attempt to give you guys quarterly updates at least, this being the update for Quarter 1 of 2020.

So what's new this update? Well, while I have your attention before you get distracted by the pretty stuff, we're happy to announce that as expected, we hit our Alpha 1 Phase 1 milestone almost perfectly on time! This is great, it's a welcome reminder that we definitely, probably maybe hopefully know what we're doing! We're on time for our internal schedule and hope it keeps up that way.

Next up, we've got a new website up and going! This is where we hope to keep team information together, as well as post small dev blogs from time to time. Go ahead and head over to Psr.digital to have a look!

Alright, alright, I know why you're here, okay? Now you can have the pretty stuff. Our 3D Art department has been hard at work on making art in 3D, if you can believe that. Peep this revolver Chris hacked away on! And if the gunpowdery pops of .357 magnum rounds is a bit too spicy for your refined palate, have a little electrical charge up with the brand new HEV Suit Charger! Not featuring the blue tubes that everyone seems to think existed in Half-Life. 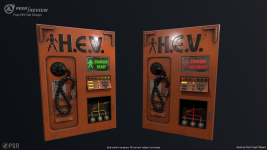 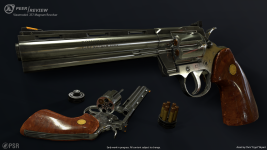 While we're at it, we've got some more work from Jupiter and Hydral in the music department. They're still hammering out tracks and track concepts all the time, and these are goodies that we think you'll enjoy.

After that, our programming team of 2 whole people (as opposed to the fractions that rumors would have you believe) have been at work with all sorts of cool gameplay stuff. Most recently we just completed the initial prototype of our Alien Grunt AI, which we hope to flesh out in the coming months. We intend to talk about that more in a dev blog soon, but for now, have a sneak preview of the prototype in action! (Please note that picture-in-picture was added to the video in post to help visualize the co-op gameplay, and isn't a working in-game feature.)

Lastly, part of our level design workflow is something we call Art Studies. Despite what your average Source Hammer Mapper Guy will show you, it's generally a bad idea to throw details and art styles haphazardly around your map and hoping for the best. This is where art studies come in! Art studies are how we get a feel for how we want our missions to look before we go all out art passing the whole map. We do this by having level designers and environment artists work together to design environment styles and create asset libraries that match the level's needs. These can then be used as a guide for art passes on the actual map. This important bit of pre-production allows for visual cohesion across the map, and less of the science-at-the-wall approach that's destined to create a mess that's harder to fix later.

Here's a glimpse at one of those art studies in action: an environment idea for Code Green! 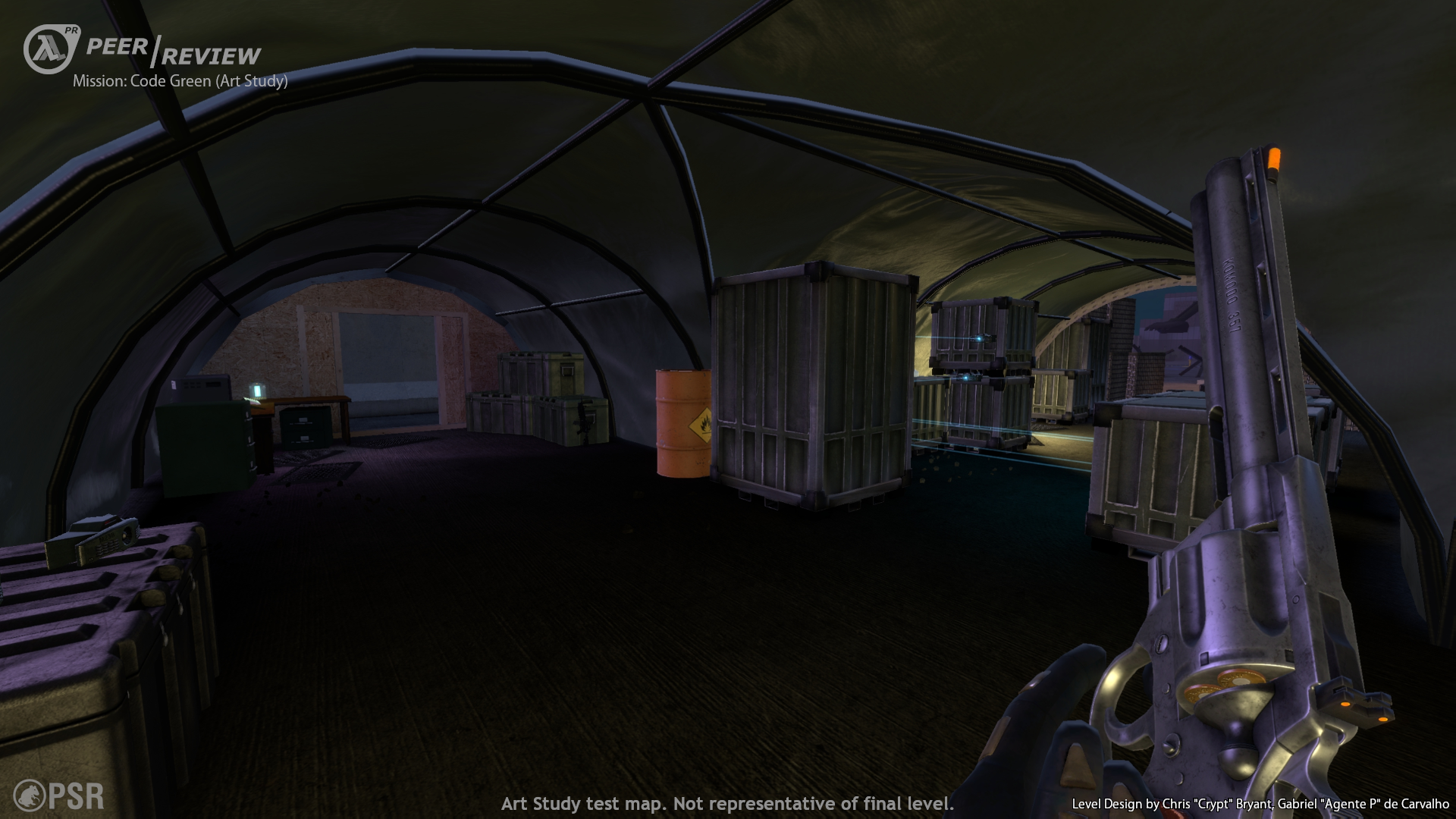 That's all for fancy media this quarter! However, if you'd like to keep up with us more in-depth, friendly reminder that we do have a Discord server. It's a friendly, safe space for all where you can talk to us, talk about games, development, ask us questions about the game, and every now and then our members will drop little development tidbits as well. For example, people in the server saw the military trunks in that Code Green screenshot above over a month ago! Wow, how novel! Feel free to hop in and join the chats!

And if your Discord server list is already too massive and forcing Discord to burst at the cyber seams and cause memory leaks, but you'd still like to hear from us between quarterly updates, we have a Twitter where we post stuff a bit more frequently than over here.

Finally, we're recruiting for most positions! We could really use more level designers, character artists, programmers and character animators in particular, though most non-audio positions are open, too. If you're interested in volunteering for our team, or know someone who might be, head over to this form here to apply! This game isn't gonna make itself, as hard as we try to make that happen. Lend us your souls!

Welp, that's the update! This part's always awkward because it only exists so we don't just abruptly stop talking about things. Your brain needs closure, so have some closure, guys! You're welcome! If you've any comments, questions or cries of outrage, feel free to post them below. We love to hear from you guys! We'll see you again (hopefully) in about 3 months.

Im so hyped for this game! Great work so far!

it's so good to see an entertaining read during an update article. i actually found myself hoping for more text along with the 'pretty pictures'. best of luck with the project ^^

Aw, thankies! I try to make sure the articles aren't totally bland when I write them but I'm also not an amazing writer, so I'm glad someone appreciates it <333

aww but I liked the blue tubes on the H.E.V charger :'( oh well, everything elese looks really good. especially that magnum MEGA N U T.

The blue tubes are entirely a BMS creation, I have no idea why everyone has universally been Mandela Effected into thinking they existed in the source material.

I think black mesa added them because they looked cool or because they were used to indicate to the player how much power is left in the charger. But I'm sure you guys could also achieve that functionality by adding a power percentage or bar on the screen.

I think the PS2 port of HL1 had something similar, in the form of a large vat of blue juice on its HEV chargers. The Health station had a green vat.

No, the PS2 version had electrified cylinders of some sort. The blue tubes being on the suit charger is purely a BM creation.

Well, the old chargers in Blue Shift had textures indicating it. Also here’s what I was saying on the Health Charger: Combineoverwiki.net