The user interface was updated to make it more cohesive with the rest of the game. The combat effects are being replaced with new artwork. Several new music tracks have been created. Plus more gameplay concepts!

We have been working hard on Pursuit of Power® 2 over the past few weeks. Check out the Kickstarter to learn the latest news! 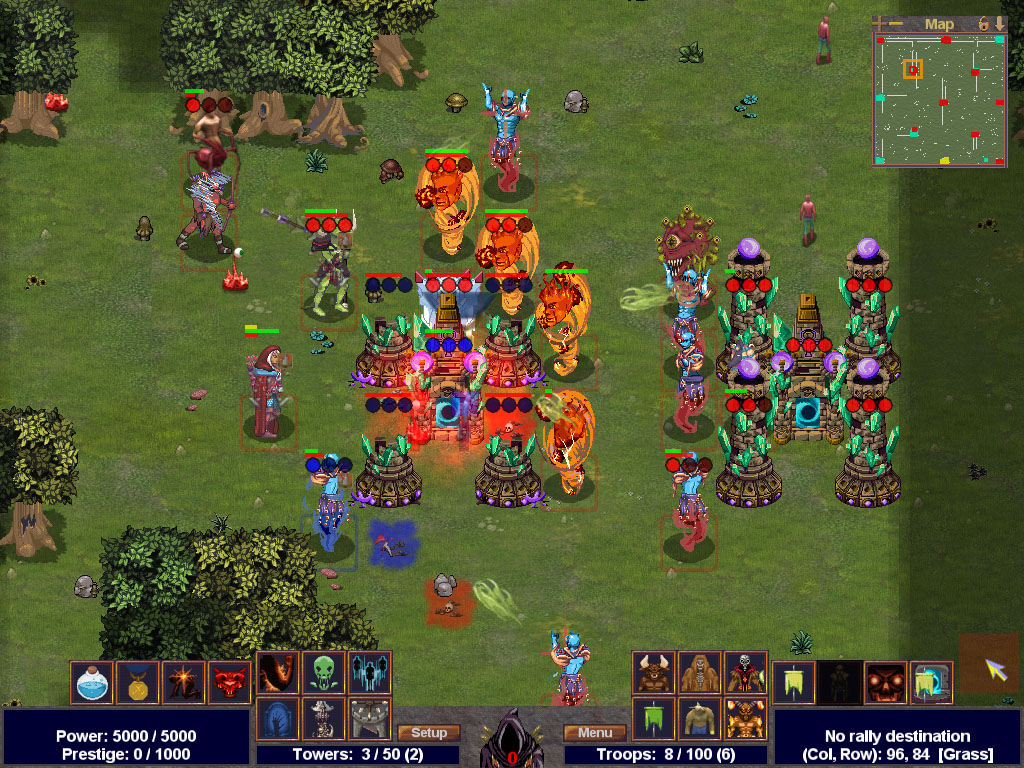 Meagan Bowden is the lead artist for Pursuit of Power® 2. She recently spent a few days working on improvements to the user interface. All of the icons have been re-worked with a new color scheme. Many were replaced with new artwork. The buttons and trim were also modified to be more consistent with the rest of the UI. There will be many more revisions to the UI, but hopefully you like the direction it is heading.

In addition, I made some changes to the code so that I can sync the projectile to the attack animation. There were a few technical challenges, but I figured out a relatively simple way to do it. I then added some initial delay values to all player units so the projectile will fire-off at the right frame.

I had to also slow down the projectile so you can see the new artwork. I purposely made it faster so I didn't have to worry about the sync issue. Now it can go at the proper speed.

I eliminated the placeholder projectile for all of the troops. The goblin and stalker leader are now using the arrow artwork. You can see it in the above screenshot. There is a trail effect that fades out behind it, which looks better in motion.

Likewise, I added a "ghostly" green flame effect for the Lich. It is currently being used as the new placeholder until the other effects are created. There will be a unique combat effect for every player unit and creature, with some possible overlap (like the arrow) when it makes sense.

I will capture some video of a combat scene when the new effects are in the game. I think it should look very cool and provide a much more interesting visual experience. I will continue sharing the new visual elements as they are added to the game. Some of the future improvements will include:

Steven Harriton, the music composer for Pursuit of Power® 2, has also been very busy creating new music! I can now share a track for the starting phase as well as three more tracks for main gameplay. We decided to keep most of the tracks more orchestral. The rift encounters and apocalypse will still have some industrial elements. I might even push some of the industrial main gameplay tracks to the later stage of that phase so it will more seamlessly transition to the apocalypse end-game.

I have a few more gameplay ideas I thought I would share. First, I've been thinking more about the apocalypse phase of the game. I don't think I have to necessarily make it a separate phase. I envision the game having a "chaos" state that increases over time. Early on it leads to the spawning of rifts.

I think the chaos level will essentially be a base value for the difficultly of the rifts (globally). Then each rift will get stronger over time as it is left unchallenged. That makes it important to destroy since the rift invaders will do some massive damage. Plus the actual rift event will become very difficult to defeat.

So instead of a specific apocalypse phase, the game could simply produce more challenging rifts, along with more rapid spawning across the map. That will encourage players to destroy the most challenging rifts as a priority, basically trying to put out fires that become increasing more difficult to control.

That concept is consistent with the goal of the apocalypse, which is to make the game more chaotic towards the end, so it comes to a conclusion. It also makes it valuable to have more fortresses since it increases the survival of players.

I anticipate that sometimes a player will need to simply let a fortress get destroyed because resources are better spent protecting the remaining fortresses. I want to create some difficult decisions, because that is another layer to the strategy of the game.

One more related idea... I think it would be fun if you could "collect" the bosses that you defeat. That would be a great reward that encourages players to race opponents for the rift encounters. I'm not sure what way the boss should be used, but there are a few ideas that could work.

They could become the morphed creature for the banner zealots if I implement that concept. Another possibility is that players could control the boss for a limited amount of time (maybe it's health drains until dead). That would mean players send them immediately into battle, probably along with reinforcements. Maybe they even get re-summoned as a normal troop along with some power costs, so it stays within the current design.

I'm always happy to hear new ideas, so please let me know what you think! :)

My next update will most likely involve a video that shows the new combat effects and other improvements. I'm going to work a bit on the music design so I can start to isolate tracks based on phases. Then I'm pushing out a new Steam build that can be internally tested.

Once I get all of that done, I will begin implementing rifts. I will explain that process in the next update too. Thanks for reading! :)