Post news RSS Pump up the Difficulty in Explosionade

Three new creatures designed to kick your butt in the new version of Explosionade!

Not-so-secret work has continued on for Explosionade! We've got the ExplosionaEditor continuing to improve, with a lot of new features including the ability to add full campaigns easily with a visual interface. On the game side one of the most requested changes for the game were "harder levels"! You guys want to die more, I take it? 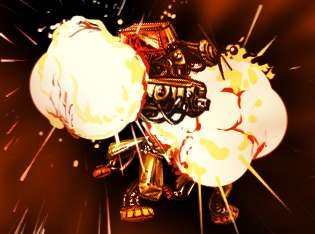 With the noble endeavor of trying have the Explosionade's creatures to kick your butt more, I've been thinking of ways to work within the 'language of the game' to create new difficulties. I'm trying hard to not just go to obvious, easy methods for making things tougher like less health for your mech, or bullets taking off more damage, or instant-death spikes everywhere. I like how Explosionade is built and I think it's extremely important to preserve it's unique feel.

The new levels should present new, tricky situations to figure out, not just have you holding down the fire button and charging forward. Explosionade's levels have a 'infiltration' feel to them. You are invading these intricate buildings and strongholds built by the Horronym aliens. In the new, harder levels, you'll have to proceed more carefully, use skill when bouncing your grenades around, and have a real knack for shield bounces, all the while figuring out how to manage plenty of new enemy types.

Here's just a few new enemies that fit into the Explosionade world of tougher levels:
'Fire spinner' (Horronym construct) mine which triggers on touch or damage. Once triggered, it doesn't explode, but continuously spouts a stream of flames, while spinning slowly in the air. It's invulnerable, but can be pushed and shot around the level as it bounces through hallways and shafts. 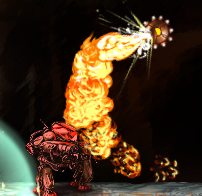 'Hopper Hive' (indigenous life-form) is a large fungus-like growth which is found under various overhangs. It drips out gelatinous 'hoppers' which are cephalopodal creatures, encased in protective jelly. These hoppers jump around tight enclosures able to stick to walls, and even jump under ceilings. The active jelly is corrosive and explodes on contact with the player's GRenaDOS mech, and the hive has a surprise of its own! 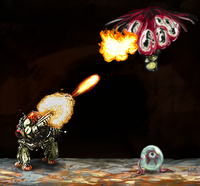 'Electromagnetic pulse beacons' (Horronym construct) generate a special energy bubble in a medium-sized range. They cause no damage, but your shield is constantly in danger of overheating when you're within their influence. Fortunately, you can destroy these beacons with appropriate force.

There's a gaggle of new tricky creatures like these we're creating for the new, harder levels for Explosionade. Also, one very large shake-up for the overall level structure is in the works as well. I'll explain it soon once we figure out if it works.

But how will these cool new, harder levels be available? We should be able to let you know soon! I'll include cool screenshots and some moving pictures and everything.

I've watched the trailer on YT, what about Metal Slugish Bosses? And what about collapsing structures, smahing enemies to death? Did I mention this is awesome anyway alreday :P

@56er
Already awesome is great. There are some bosses in the XBLIG version. This new mega-version will add more boss variety.
Things falling and crushing guys below.. hmmm. that's pretty cool but could turn tricky to balance. I'll see how it plays out.

@Theon
The slow pacing is tricky to get the hefty mech feel. Though I agree with the problem of enemies fire too continuously. Maybe I'll make them shoot in tighter bursts, then go though a reload animation, to help break up the attacks, and add more flavor.
Thanks guys!

Bosses are always great. Maybe you could include a coop boss, that has to be shot from a special angle first to open up its weap spot (mouth, jaw etc.), so you can only hurt it if your buddy works in team with you.
About the crashing building, Walls stuff: It could be complicated if you got a vertical level design, as you then could block you way by your own, but the rest would be cool. One more suggestion: Let the players mech stomp against standing walls, so the fall over and smash enemies behind, that would be a cool surprise attack :P