Today we have a render of a small and speedy Soviet tank, the BT-7. 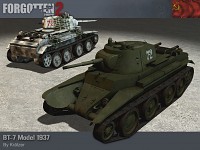 The BT series of tanks were direct descendants of American Walter Christie's experimental tanks of the late 1920s. Following the rejection of his Model 1928 by the US Army, he offered the design up for foreign buyers. Soviet agents were able to purchase and export 2 prototype hulls as well as blueprints, despite the sale being without the approval of the US government.

The BT-7 was the last mass produced variant in the BT series of tanks. In common with its predecessors, it used the Christie suspension system. The large coil springs of this system allowed the road wheels a large range of movement, which meant that this tank could travel much faster over hard terrain than other tanks. For use on roads, the tracks could be removed and a chain drive connected to the rear road wheel. This allowed for very fast travel without damaging the tracks, but was found to be of little use on the largely unpaved roads of the Soviet Union.

The BT-7 was first used at the Battle of Lake Khasan against the Japanese. Operation Barbarossa saw the loss of a great proportion of the vehicles, many abandoned due to poor maintenance. They served in ever lessening numbers until the end of the war, with their final use in the Invasion of Manchuria in 1945. The BT-7 was made by Kraetzer.

Our winners for this week's screenshot competition is pizzzaman12. You can view the winning submission here.

We are now accepting entries for the week of October 8th. If you think you have the best FH2 screenshot, post them href="http://fhpubforum.warumdarum.de/index.php?topic=16835.0">here.