Apologize for the late update. To be honest, I haven't had much time to put into Prototype: Murakami, and the point & click portions are proving to be more difficult than I initially expected. Still, I did add in a new feature: drag & drop into the inventory. The screenshot below demonstrates the pistol dropped into an inventory space. Should Unity-chan leave the puzzle at this state, she will now have the pistol equipped. 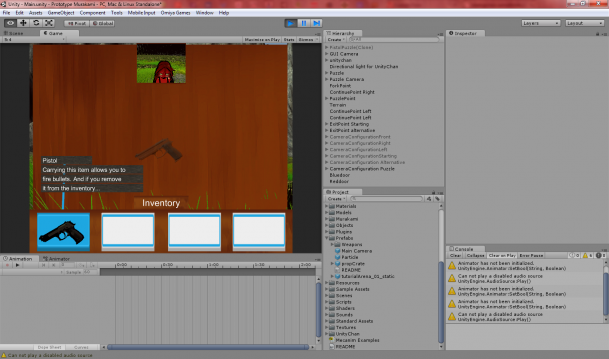 As of right now, this is only a one-way drop. Once the pistol is dropped into the inventory, it can't be take out. I'll be working on making sure the pistol and other items can be dragged out of the inventory. Still, this is a pretty darn good start in my book for an inventory system, especially since I'm programming this from scratch.I'm still working on this puzzle portion, but I may have a playable build posted tonight.