Today, I have a prototype of the menu letting you know of the branching paths.

Last time, I was in the middle of the rail system, particularly on setting up a menu that shows up when approaching a fork. Today, I have a prototype of the menu letting you know of the branching paths. Clicking on the buttons in the screenshot below will put Unity-chan down that path. Escaping from the menu is as easy as just turning around with a key-press (currently assigned to shift). 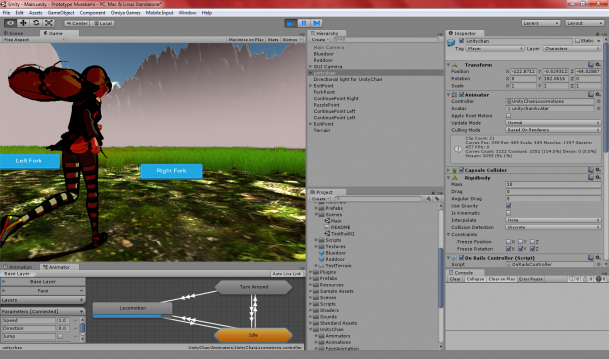 Next up will be the camera animation. In the screenshot above, it's hard to tell that our heroine reached a fork. Thus it'll be necessary to visually show that the path does indeed split. That's a little hard to do with the current suspenseful camera angle, so triggers will be implemented to pan the camera out.