In this update I want to introduce you to our first project: Zoel’s Amazing Castle. Firs thing first, as this is the first update it seems appropriate to explain a bit what the gameplay and the story will be about. If you have already read through the Zoel’s Amazing Castle Page, you are warned that this information will be duplicated there.

In this update I want to introduce you to our first project: Zoel’s Amazing Castle.

Disclaimer. this update was originally posted on Smoke and Mirrors on date 11 November, 2016

Please take into account that the project that I am presenting is in a very early stage, and any information regarding gameplay or story that I may reveal here and even graphics can change over the development process.

Firs thing first, as this is the first update it seems appropriate to explain a bit what the gameplay and the story will be about. If you have already read through the Zoel’s Amazing Castle Page, you are warned that this information will be duplicated there.

The game is an action platformer with a heavy focus on exploration in which the Player must traverse a castle full of traps and trickery in order to reach the mad and powerful illusionist that awaits on the top. However there is a catch! The castle is constantly changing its shape to confuse the heroes, so every time you step in, the layout will be completely different. Also, the game is a (soft) roguelike, so if you die you have to start from the first level. What I mean with soft is that even if you restart at the beginning when dying, there is still some kind of progression system that persists through different play throughs, unlike other (mainly older) roguelike games when all the progress is completely lost on death.

Sneak Peak into the Story

Nowadays, a very imposing castle raises up, next to a peaceful city. Strange and terrifying noises sometimes come out, as well as light and smoke of different unnatural colors. The people of the city are terrified of the location, and live with fear that some day the madman that lives inside will come back to take the city with his dark arts.

This wasn’t always like this. It wasn’t that long ago that an illusionist named Zoel lived in the city, and was always trying to impress the people with simple and harmless tricks.rabbit However he received nothing more than mockery out of his effort, as the common people failed to see the effort of his actions, the effort to make the world a happier place. One day, he decided that he had enough, that he wouldn’t rest until he found power. Power to make everyone respect him. Power to make everyone pay for the humiliations he suffered.

After that Zoel left the town in the search of knowledge and power. This was the last time anyone in town heard from him in years, but suddenly, about 3 years later, a gigantic castle appeared next to the city, out of nowhere, giving birth to nightmares for everyone in town from that point on. 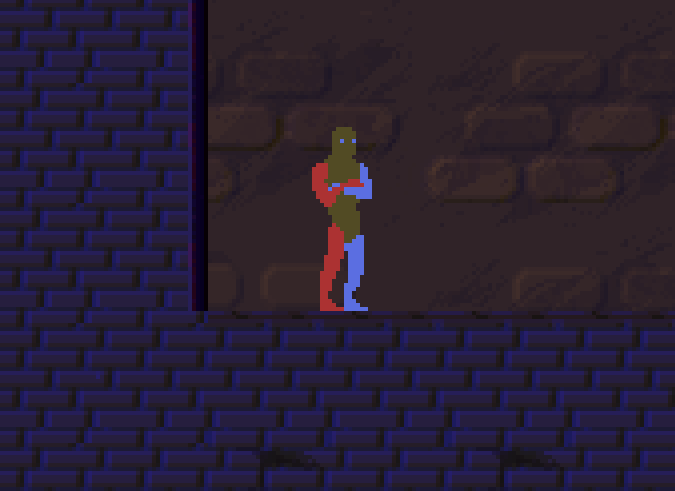 He is a bit impatient. He will be joining us during the early stages of this project. He is a dummy character to test the different animations. Our reasoning behind him is to be able to advance with the development with a blank simple character, easy to animate and without (much) personality, so we can advance on the development before deciding the character designs beforehand.

With the help of this handsome man, I can start explaining you some of the core mechanics of the game while showing you examples. For today, let’s talk about the combat in this game.

Combat in Zoel’s Amazing Castle is what you would expect in an action platformer, with a few twists on the formula to keep it fresh and interesting, without going too far away from the basics. 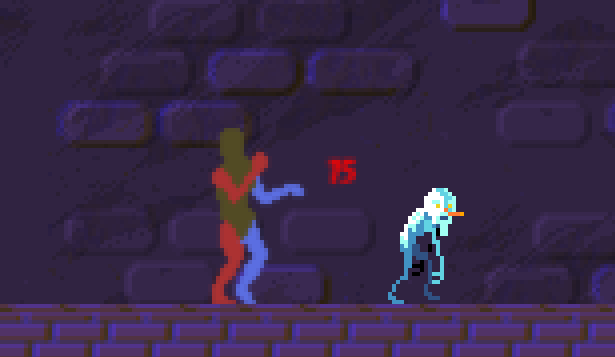 You have an amount of hit points, and if you get hit by an enemy or a trap, you will loose some. Since we are in a roguelike game, dying is pretty bad for the player, so there should plenty of healing items around to keep you healthy, at least if you are careful with the amount of damage you take. Also, the healing items can’t give you hit points past your maximum points, but the amount of maximum hit points is different depending on the character, and it can also be increased by finding certain items that you can find hidden in the castle.

Of course, with all this evil creatures lurking around, the player needs a few tools to defend themselves.

First of all, we have physical attacks. As in every other action platformer you can attack, in this specific case with a physical weapon. The damage that the attacks deal is calculated depending on the statistics of the player and the weapon itself. 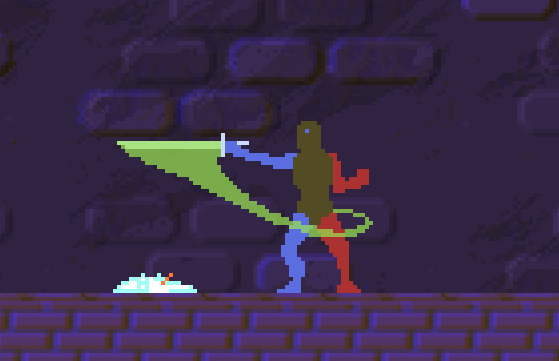 But only that would be boring, wouldn’t it? Taking this into account we have a combo mechanic that makes your character do different attacks if you attack several times in a row. 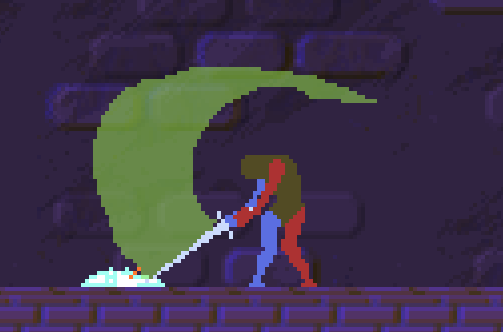 Different characters will perform different combos, and there will also be 2 different move sets per character, which you can change between by switching weapon categories (For example, changing your sword for an axe). This system will help keeping the melee combat fresh and interesting during different play troughs of the game. Of course, apart from the combo itself there will be special attacks for the areal attacks and for the sitting stance. 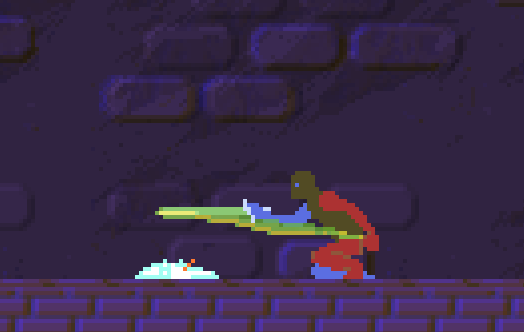 Apart from the melee attacks that I have just described, the player also has access to magic (or skills, depending on which character you are using), that will consume a resource to perform something that can be very useful for the player, such as attacking enemies from afar or above you, or even increasing the damage you do for a while. The most common resource is mana, which will regenerate slowly so the player can’t abuse this magic system.

The control schema used for this magic system is similar to the one used for Super Smash Brothers special abilities, which means that you press a button to use magic, and then the magic to use will be selected depending on which direction your joystick is facing (neutral, forward, up or down).

However to gain access to this powerful magics, you will have to find them hidden throughout the castle, emphasizing even more the focus on exploring.

This concludes the explanation of the core combat mechanics, which was the topic to cover today. I hope you enjoyed and that you stay tuned for future updates, in which I will explain other core mechanics of Zoel’s Amazing Castle.

Have a nice weekend!

Very cool looking project, I cant wait to see where it goes :)

Thank you! This updates were previously posted on my webpage, but i will be posting them here one at a time, but I advice you to go there if you want to see more.