This post is dedicated towards our project goals and vision for our game, Traveler. We're a group of game dev. students and this is our first post in our weekly Dev. Diary series. Check it out!

Hello everyone! Our student project has just started and we've got plenty of things on our plate, and even though some of it is actual buns and cookies from our Swedish "go-fika" some of it is also game dev. related. We're a group of 19 students, a mixed group from Game Design, Narrative Design (officially called Game Writing at the University of Skövde), Programming, Sound Design, Music Composition and Graphics, which is divided into 2D, 3D and Animation.

Our time frame goal for the project is to have a playable version done by May 30th and feature our game at the exhibit the University of Skövde has for its Game Project II course. Along the way we also aim to participate in this years Sweden Game Awards, which has its deadline set on May 19th. Because of this short time frame we are aiming for at least 15 minutes of solid gameplay for an experienced player.

But, with all that in mind, what do we plan on achieving during these ten weeks (now eight, jikes)?

We decided to go with Unity as our game engine, and we'll be using version 5.6.0 as we go along. Our main goal with the project is to make a fast-paced, intuitive adventure platformer with responsive movement and a momentum-based running system. All within three proper stages, but have them connected through transitional corridors and without loading screens. We want to make the movement of the game fun, to make the basic interaction with the world around the player a worthwhile gameplay aspect in and of itself.

By utilizing the setting of an ancient alien-like ruin the very design of the environment will be its own platforming puzzle. Movable platforms and a semi-manipulable environmental objects will not only form the main obstacles, but will also act as the means for the player to maintain their momentum. Launch yourself by moving pillars under your feet, time your manipulation of the floor to maintain a level running path or use the objects to block mechanism otherwise blocking your path. Through this we will make use of sequential pacing and have certain starting points where the challenge and pacing ramps up, and other segments where the pacing ramps down and the challenge is not as intense, giving the player a chance to take in the atmosphere and environment as well.

Early test build of the potential layout for the beginning of stage 1.

The controls will be simple and will only use two sticks and two buttons of a controller. One button for jumping and one for interacting. This way the gameplay will maintain a level of approachability as well as keeping its focus on speed and flow to solve the various platforming puzzles.

The narrative for the game will not play a central part, but it will nonetheless be featured in full view for the player. The ruins themselves and the story they tell will be the main form of narrative presented to the player. Through murals and scrawled text on walls, of which the alien text will be translated in real time for the player to be able to read, will be the main compliments for telling the story of the rise and fall of the civilisation the main character now find themselves in.

The story centers around a legend of a tree which carries the peaches of immortality in the heart of these ruins. The main character, a wretched soul who finds themselves punished for deeds no longer remembered and cannot fully die. Stuck in an eternal loop of reincarnating as themselves, on the very spot they perished they now seek the peaches of immortality to escape their punishment. What they don't know is the origins of their transgression, the very reason they are punished by the powers that be, lies within these very ruins.

The idea is that the three stages of the game will project as certain emotions or ideas, and through these emotions and ideas the murals and scrawled text will build upon this emotional theme. And through this tell a story which is connected to the area, the feeling and the general atmosphere.

Our vision for the visual representation is to create a ruin with mystical features has an alien like feel to the player. We don't want it to be directly reminiscent of a human ruin and instead cause the player to feel out of place, somewhere they don't recognise. Our current idea for the art style is a semi-realistic approach, taking inspiration from games such as Abzû and Firewatch. 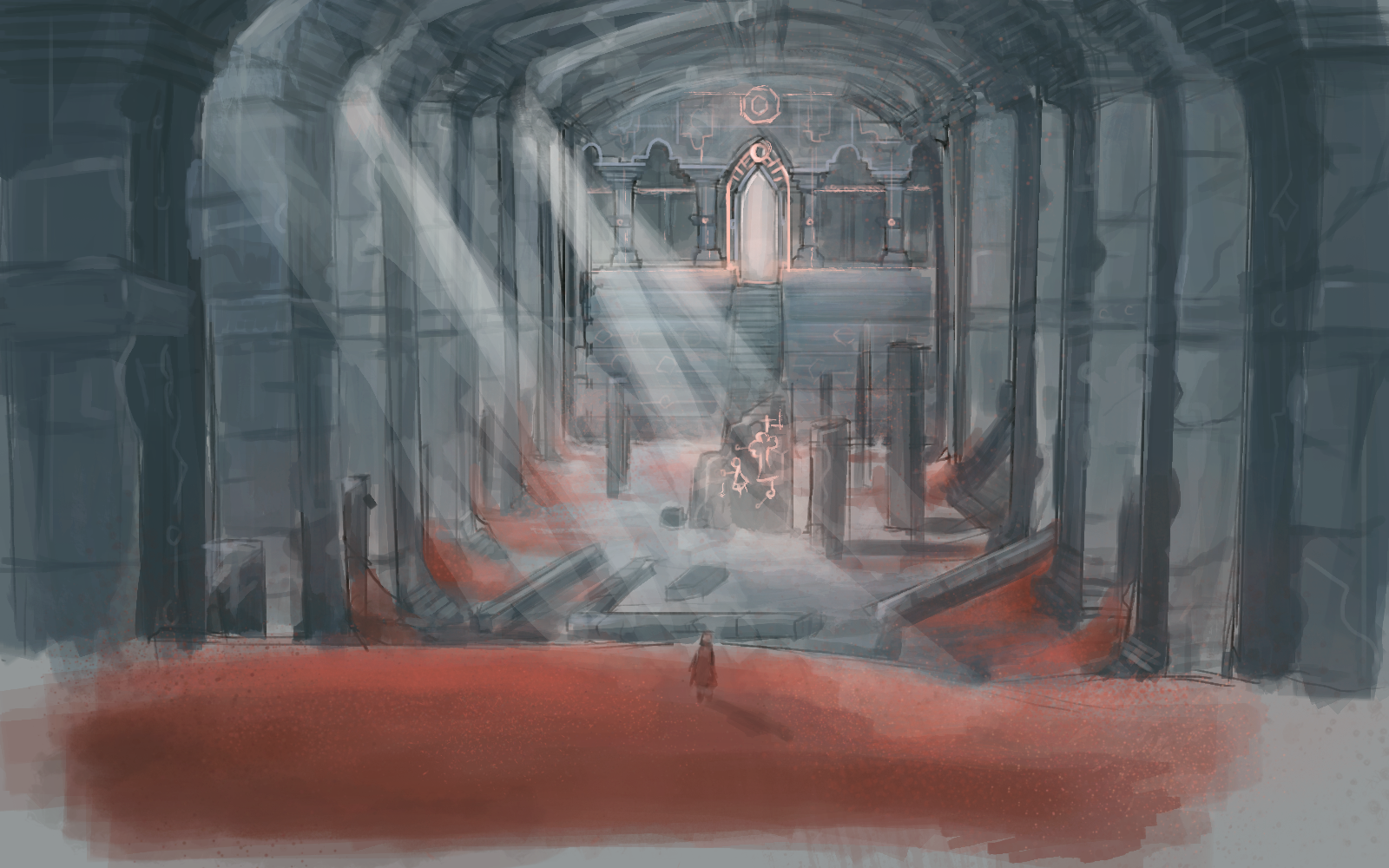 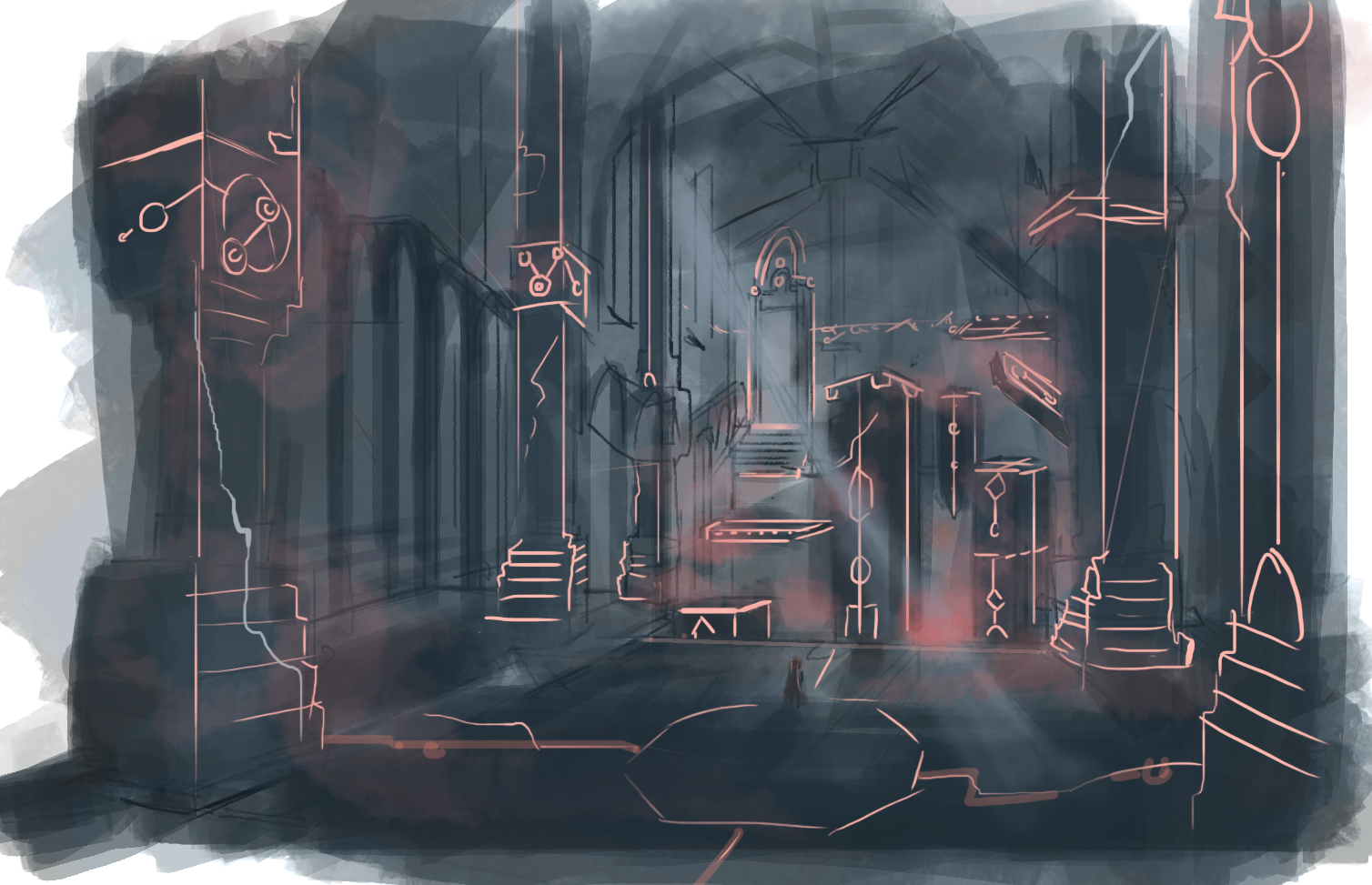 Early environment concept art for the beginning of the game.

With the main character we want to create an androgynous character, one they may have certain aspects a feminine gender identity baked in, but nonetheless maintaining the idea that if could be any gender. We also wanted the character to be a suited build for the task they would perform, and we are constantly reiterating on this. 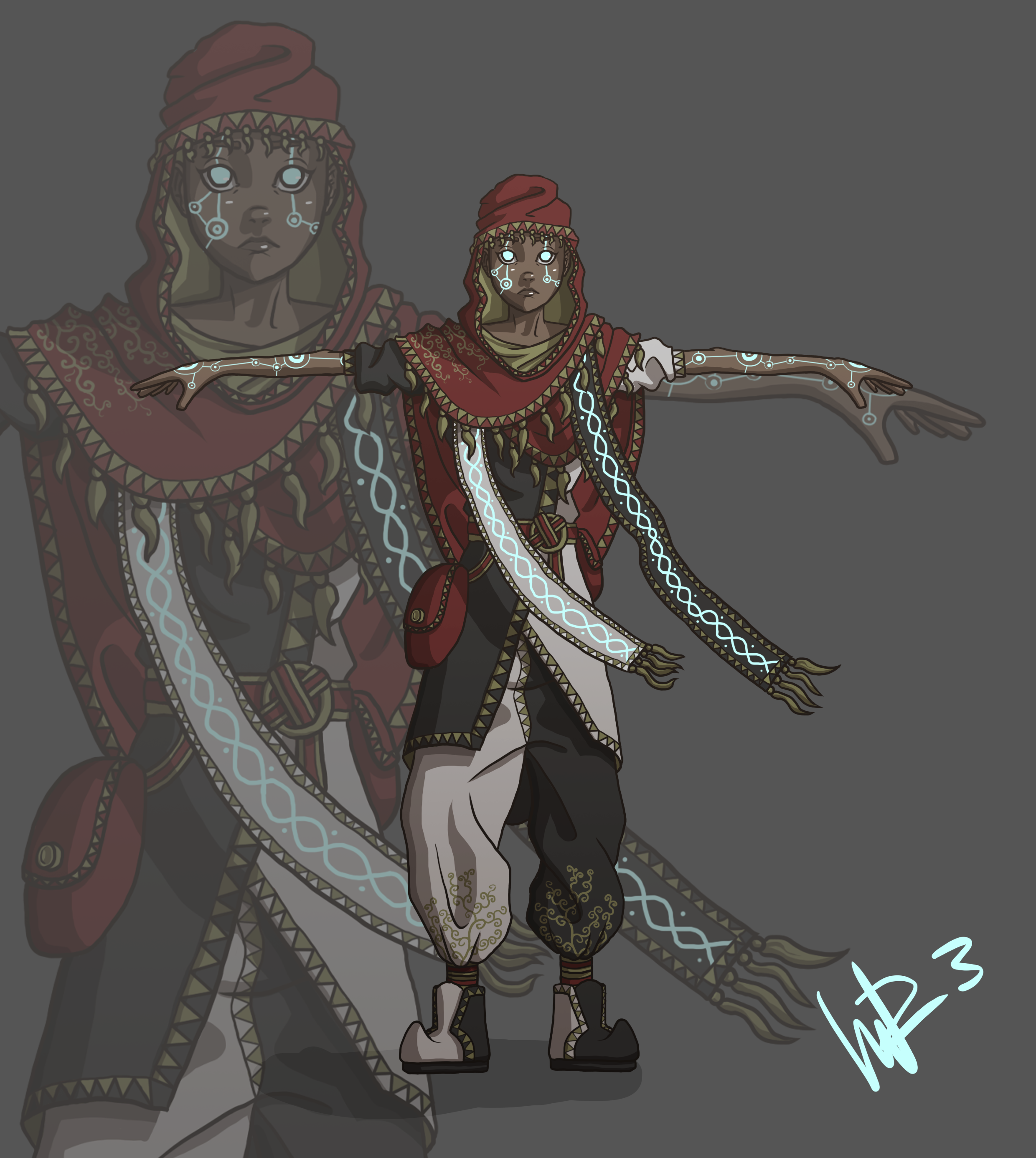 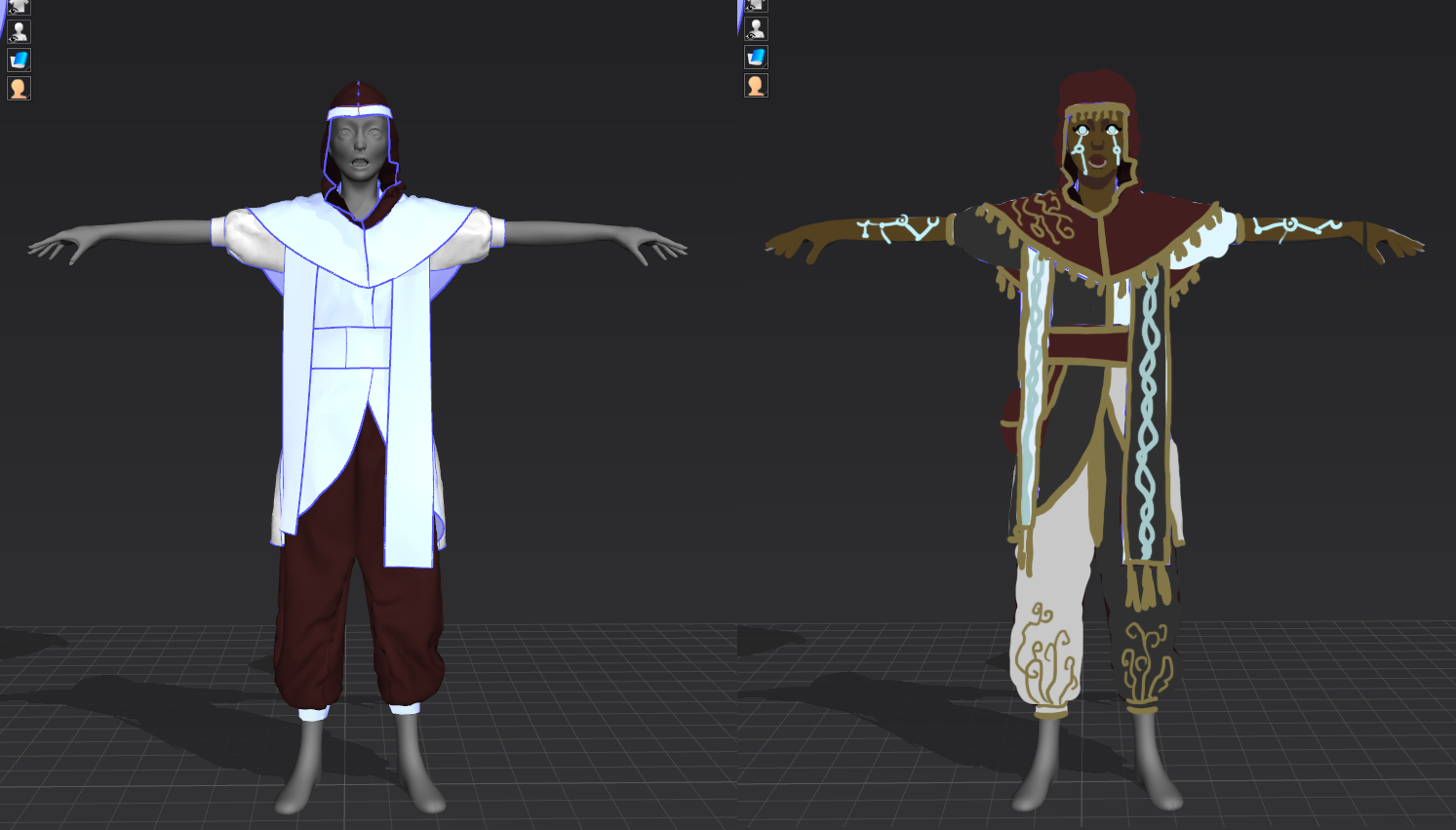 Furthermore we will have a heavy focus on animation and feedback for the player. Since we want to create enjoyable movement in the game the animation will play a crucial role and our animator have been hard at work from the get go, we look forward to showing you the results!

Working on the same idea as animation, the sound design will be focused on giving the player adequate feedback on movement and interactions. The feedback is, in our opinion, key to the experience we want to achieve.

The music design of the game will fill an obvious atmospheric role, but also a role of pacing out the action. Early on we decided that we want certain segments without music, segments that make use of ambient noise and natural sounds instead to create the atmosphere of an isolated ruin, locked away far from civilisation. Music will instead work as a highlight, and with segments void of music the mere fact that it kicks in will make a larger impact than just ramping up the tempo of an existing background track. But, also as highlights to convey an emotional state or feeling, to work as a punch line for minor story segments.