A intensive working time is gone and i have had some time to work on OPCL, read here what happened last :)

one week before i recorded for map "Desertcamp", which will be released first a stand alone mod, the voice takes for synchronisation. 490 sentences with 4 characters plus 1 female version from jack (jacki then :D).
as you maybe know, you can select a character before playing, which have heavy influence of game style and of course there are two female characters.
the next task was to find a way to handle this switch in-game for the voice takes without work for me, so i simply inserted in my storytelling trigger (its the one which shows text, play voice and play a animation from the other guy), a second female sound slot, the engine now switch then automatically.
next problem was, that the time the showed text was setted for slow readers, so you could read the text and try to understand. but together with the spoken voice files, it was very annoying to wait because the spoken text was, lets say 4 seconds and the written one was shown 9 seconds. in a complete dialogue this was really annoying and destroyed the immersion complete.
so, because the spoken text is not ... very good :D ... (its my hobby project ^^), and showing the written text only the time like the length of spoken text, the player probably does not understand anything what happens... so a new solution for those two problems (there is a third inside) needed to be done:
- voice over needs to be adjustable
- a message log needed to be done.

this is how it looks now: 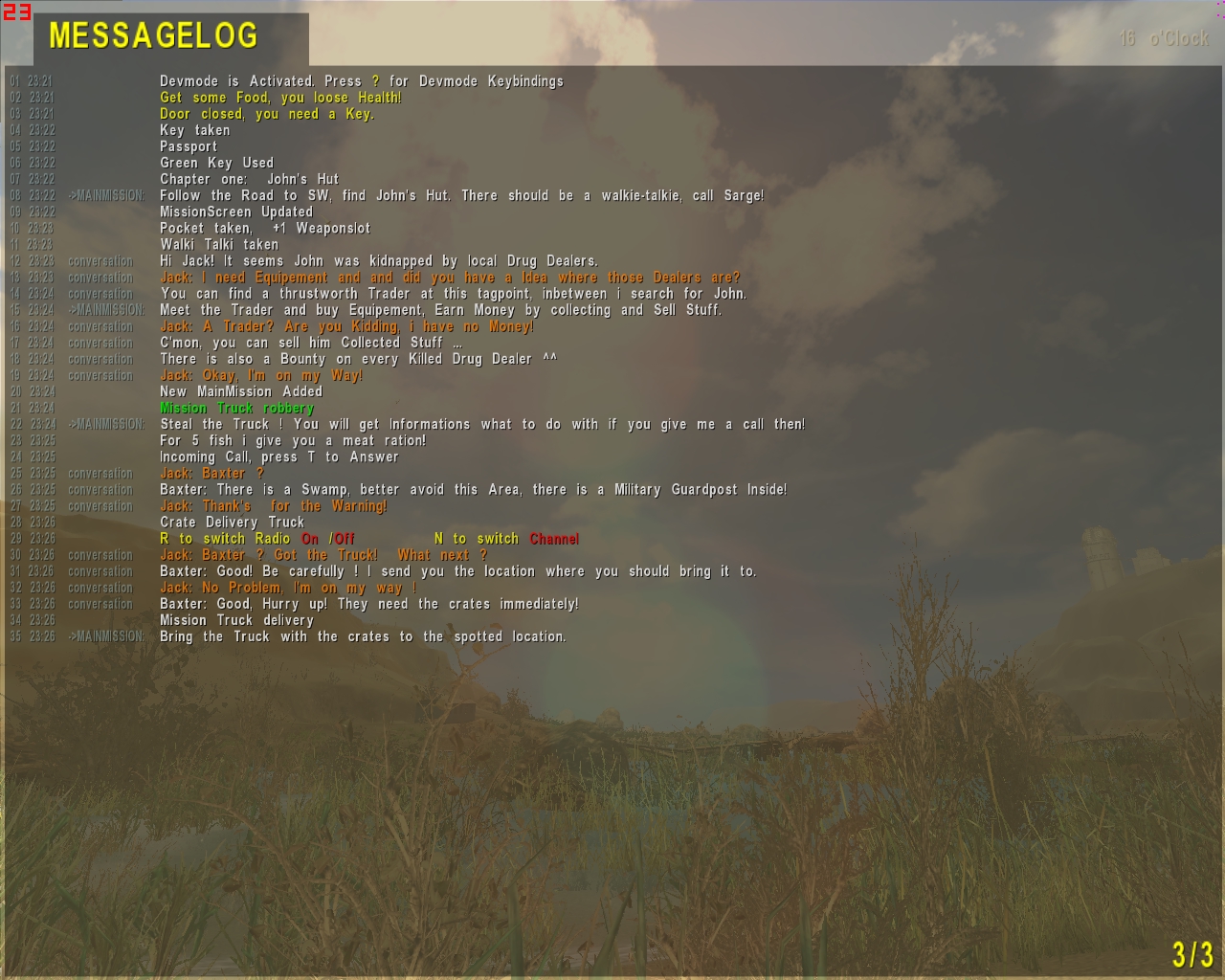 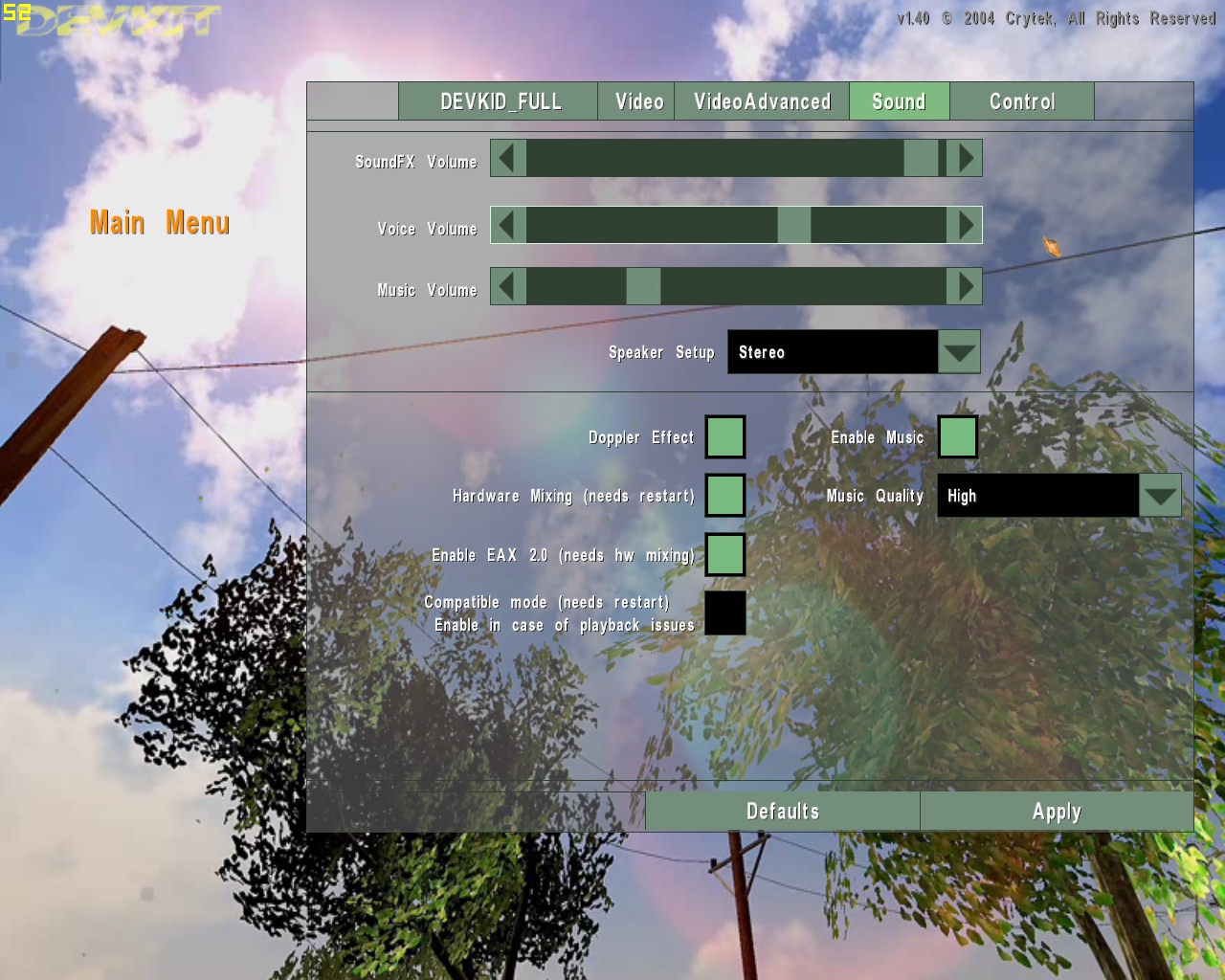 the message are sorted and marked and saved to savegame, so you can read the task and story with hints at any time you like. in other hand it gives me now more interesting possibilities for puzzles, which is on the other hand bad, because the main story line for that map is written and already recorded -.-
at least i will try to throw out the last few "go to tagpoint" hints and replace them with "follow the road to ... until you see a ..." .

some technically things for those who interested in:
the storyteller trigger which shows the animation, plays sound, shows the text and also can wait if player draws the walki talki (to be sure player is in mood to get new mission or infos), checks first the length of the spoken wav file, then (in default setting), it shows the text only that time and switch automatically to female alternative wav, if its in the slot and if player is female. the automatic messagelogger tracks all triggers which can show messages and provide them with a mark, like main mission, submission or other and gives also a timestamp. if player press tab to mission objective screen, he is on side 1 of 3, pressing tab two times more shows then the message log screen. believe it or not, i needed 3 days for that message logger, 3 hours for messages loggin & showing and 3 days to bring them in a nice viewable format and sort them. its also possible to let make the text size adjustable, but i'm not sure about, so feedback is welcome. a video which shows how the story voice over sounds like will be done in next hours, have to ride my bike now :)

Great news! I can’t wait to play this mod.

because of the new message log i decided to overwork three tagpoint-missions, they will change in "search in near of a ... a ... ". this was ofcourse impossible to use with the 4 seconds message texts on screen in original farcry.
so i have written today small new textpatterns which will be hopefully recordet tomorrow, so some parts of missionstructure turns even more into RPG direction. its much more satisfactioning to insert puzzles into the text / story knowing everyone can read and translate it in patience.

have wasted today a whole coding day to find and eleminate a bug with my footstep and tireskid decal routines. after a certain amount is reached, i delete the old ones and spawn new. but the build in command in farcry to delete cgf's can simply cause a crash to desktop if its called to often after eachother. this is ofcourse not accectable but the bug occoured yesterday the first time as i have had done intensive memory leak testings with a new vehicle . such unexpected things cause always delay in developing, I'm sorry fir that but atleast i would like to deliver some working stuff, not "almost" working ^^

You haven't shown any screens of the female character yet. I would like to see that.