I've been working on fixing some problems that were shown and not shown in update 2.Also added some new features and assets. 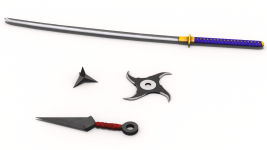 I haven't added the ability to use the ninja weapons, and I may or may not remove them later.