In this weeks dev blog #40 we have the new Men-at-Arms faction, a zombie overhaul, fleeing and desertion and campaign customization for you!

As always we’ve added a bouqet of new features and content over the past two weeks. This time we have a new start campaign screen with difficulty and banner selection, more in-game mechanics with the ability to order retreat from combat, and mercenaries deserting you if you run out of money and/or food. And that’s not all. Let’s go into the details.

When starting a new campaign you’re now able to name your mercenary company, select a banner and choose a difficulty level. We believe it is important to allow you to brand your very own mercenary company here as you want to. The name you enter will be referred to in a lot of texts in the game (such as in contract offers and events) and the banner will be shown all the time on the worldmap. 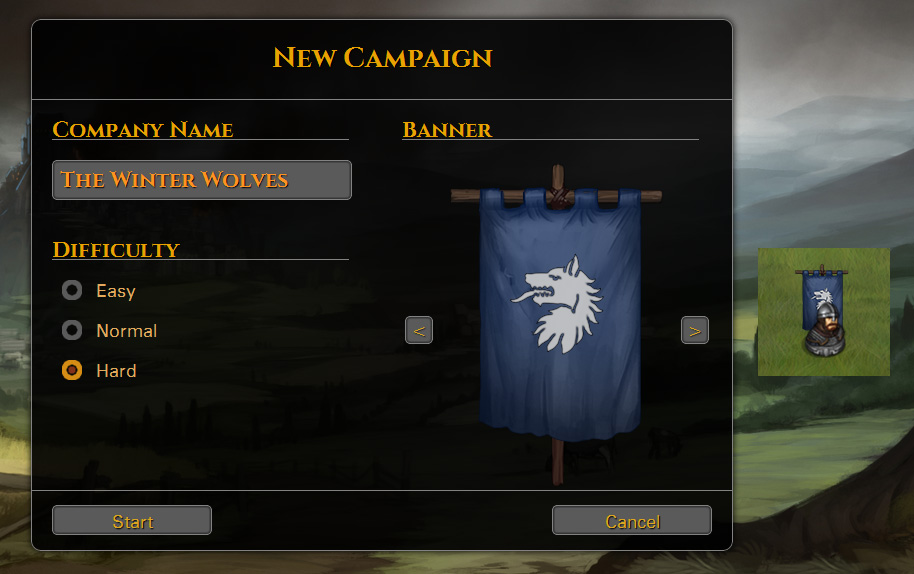 You may remember from a previous update that we want to provide the ability for creating custom banners by choosing shapes, colors and emblems. It’s not off the table but we decided to postpone this feature until later and concentrate instead on more significant things as we get the game ready for launch. For the time being you have 22 different premade banners to choose from.

One major point of feedback we took away from playtesting so far was how different testers rated the difficulty of the game and importantly also how different they felt about that challenge. Instead of streamlining the game into a one-size-fits-all, we’ve now added three difficulty levels. Those levels do not affect the AI and do not affect how strong enemy types are. Instead, they focus entirely on the economic aspect of things. Depending on difficulty, you’ll have different starting funds, availability and prices of equipment as well as recruits. The exact differences between the difficulty levels are shown via tooltips here in order to help you decide what level best fits your preference.

With an open world map that doesn’t scale to the player’s strength it’s quite possible to end up in a battle that can’t be won. Not every battle should need to be fought to the death, however, and so we added the option of retreating from tactical combat. It’s better to flee and fight another day than to die pointlessly now, as the saying goes, and this should provide a good in-game alternative to just reloading an older savegame.

To retreat from battle, you’re best advised to first move all your Battle Brothers to the very edges of the map. If you give the order to retreat, anyone on the edges will make it out alive and join up with you again on the worldmap. However, anyone not on the edges is going to be left behind and is likely going to die. Of course, how you start battle - whether surrounded by enemies or in formation with all your opponents in front of you - can have a big impact on whether you can make it to the edges in one piece. Likewise, it’s not hard to escape from slowly shambling zombies, but it can be difficult to escape from more mobile opponents, such as vampires that can transform into a flock of bats to cut you off.

Sometimes it might be necessary even to sacrifice some of your men in order to save the others. Thanks to the simulated nature of the worldmap, killing even a few opponents and then retreating will still have a real impact on the world and means that your opponent’s faction is now missing some men for future engagements.

Mercenaries in your ranks expect two things for risking their lives on a regular basis - daily payment in silver crowns and food. If you fail to pay or feed them, they will eventually desert you. On hard difficulty they also take their equipment with them, but they’re nice enough to dump it into the stash for now on easy and normal difficulty before leaving you. If you run out of men completely, you’ll lose the game. 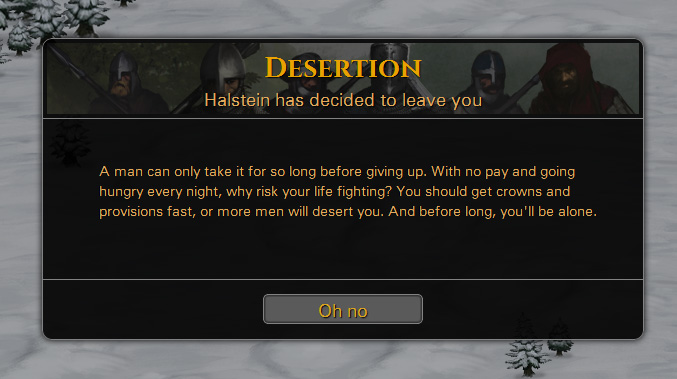 Luckily, your men won’t desert you the instant that you’ve spend the last of your crowns. A check is performed daily based on their bravery and a multitude of other factors. If you have an active contract going, people are a bit less eager to leave you, since there’s payment on the horizon. If they have the ‘Loyal’ trait they’ll generally stick a bit longer with you, whereas if they have the ‘Disloyal’ trait they’ll be quick to leave you. If you run out of money, characters with the ‘Greedy’ trait will take this especially serious, whereas running out of food, while certainly not a good thing, isn’t that serious for characters with the ‘Spartan’ trait who consume less food to begin with. As a general rule you really shouldn’t run out of either money or food.

We’ve finished the final faction allied to the player for our Early Access release: the Men-at-Arms. They’ve been active on the worldmap for a while now, chasing bandits back into the forests and duking it out with orc raiders, but now they’re also able to fight alongside the player in tactical combat. Those usually well-trained and well-equipped professional soldiers are garrisoned in watchtowers and strongholds across the land and send out patrols to guard roads, villages and cities from raids and marauding beasts. You’re not the only one out there getting work done!

The Footman is the standard infantry type and makes up the bulk of most units. They are relatively young men conscripted into service, decently trained and equipped but lacking in actual combat experience. They wear light weapons and armor, usually gambesons, and wooden round shields.

The Arbalester, like the Footman, is a young man conscripted into service but trained in the use of the crossbow as opposed to melee weaponry. A relatively new weapon that requires less training than bows to use effectively, the crossbow makes Arbalesters dangerous opponents to face at range, even though the time needed to reload their weapon can leave them vulnerable.

The Footman Veteran started out as a regular Footman but has since become a professional soldier with better equipment subsidized by his lordship. They wear basic chainmails, kettle hats, kite shields and decent weaponry, sometimes even heavy two-handed weapons.

The Sergeant is an older and well-experienced man in command of smaller units of Men-at-Arms. He’s skilled as much in the use of weapons as he is in small scale tactics. In true movie fashion, the Sergeant often foregos wearing a helmet, prefering instead to be able to shout orders all across the battlefield. In gameplay terms, his presence raises the bravery of other Men-at-Arms quite a bit, boosting their confidence and making them less likely to flee. Should he fall, however, this can easily result in a ripple effect of morale plummeting.

The Knight is the most powerful combatant among the Men-at-Arms and usually in command of large units. Knights belong to the nobility of the land and always have a unique name. They boast the most expensive equipment available and sport the banner of their house on their shield in combat. Lifelong training at a quality only available to nobility and the attendance of tourneys have helped him hone his combat skills a great deal. A knight can usually take on several lesser opponents at once and still come out victorious.

Zombies were the very first opponents that made it into the game back at the end of 2013 when we were still prototyping the tactical combat. A lot has happened since - for one thing, we overhauled how Battle Brothers look and added human opponents with a lot of visual variety. Those old zombies were beginning to look quite a bit out of place. 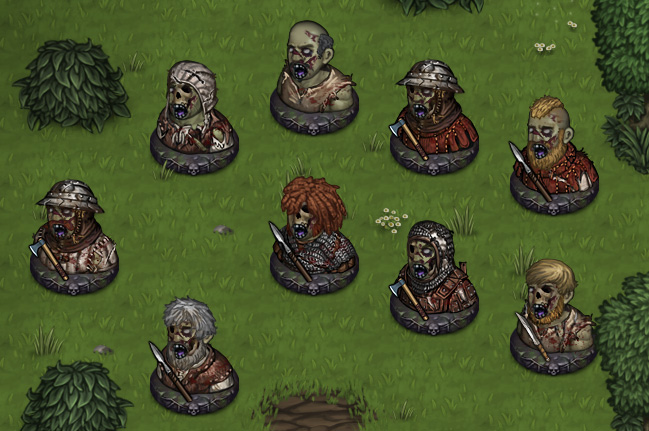 To address this, we’ve overhauled the zombie visuals to make use of the existing human assets with zombified colors and additional layers of skin missing, blood and zombie mouths. The result is a cool new look on par with everything else, a lot of variety and some gameplay improvements as well. See that zombie with the chainmail? It’s a real chainmail now, meaning that zombie can take a beating but you’ll also be able to loot that armor after combat, even though it’s damaged already and may need some repairs (and a good disinfection) before wearing it.

funny, we get that question a lot lately ;)

We are aiming for late march/ early April and we are 90% sure that we will make it!