I'm now at a point where I can explain some of the gameplay in more exact detail.

Since I originally showed Color Fight, I've been working pretty consistently, and managed to get quite a bit of work done. Amongst many other things, I finally settled on a set of properties for each of the seven colors that are fun and play off each other in interesting ways.

In Color Fight, players have two main abilities: they can fire with the right trigger, and they can paint the playfield various colors with the left trigger. They start with just blue. Blue is used as a barrier, to block players and fire. Players can chip away blue, incrementally, by firing at it. After that, shortly into the game, players can acquire one of the other two primary colors: red or green.

Red can be used offensively. Unlike blue, players are able to pass through red, but doing so causes them to take damage. Red can't be destroyed unless it's mixed with blue to create magenta. Magenta has the opposite properties of red; It heals players and is able to be destroyed. So with red in play, there are more ways to take damage but theres also a way to heal. Movement also becomes more strategic as there are now additional ways for players to trap and screen each other.

The last of the three primary colors, green, is the most eccentric. It simply curves the path of objects that pass through it. This allows players to curve their fire around cover, and makes lining up shots much less trivial. Green curves clockwise -- yellow on the other hand curves counter clockwise; so with enough planning, players can make objects travel along any arbitrarily complicated path they like. Green allows for a lot of other emergent gameplay tactics that I won't go into. I'm hoping people will find satisfaction in discovering them themselves.

The last color I'll mention is white. If all three colors manage to combine and create white, they become very unstable and explode when fired upon. This can be used to set up chain reactions, typically turning the screen into a flashing, strobing, mess of particles and debris.

It took a while to settle on those properties. I tested a lot of other stuff that wasn't nearly as interesting. For example, I spent a whole day implementing an algorithm that computed reflection vectors off the bitmap shapes, so players could ricochet there shots around. I eventually got it working okay; but for something like that to work as a gameplay mechanic, it needs to be perfectly precise and predictable. It was accurate about 90 percent of the time, but I could tell, that 10 percent of the time when it seemed like a shot should bounce 60 degrees and instead it bounced 90 degrees, would be really frustrating for players. With the way the game's setup, rendering everything as bitmaps, it's very difficult to calculate seemingly accurate bounces off of irregular surfaces. It was never going to be perfect, so I scrapped it. I still have plenty of tweaking and balancing to do to the gameplay, it’s just a relief to finally have it at a point where it’s mostly consistent and makes sense. I can now push forward and continue programming and animating all the other pieces of the game that were contingent on the gameplay structure. 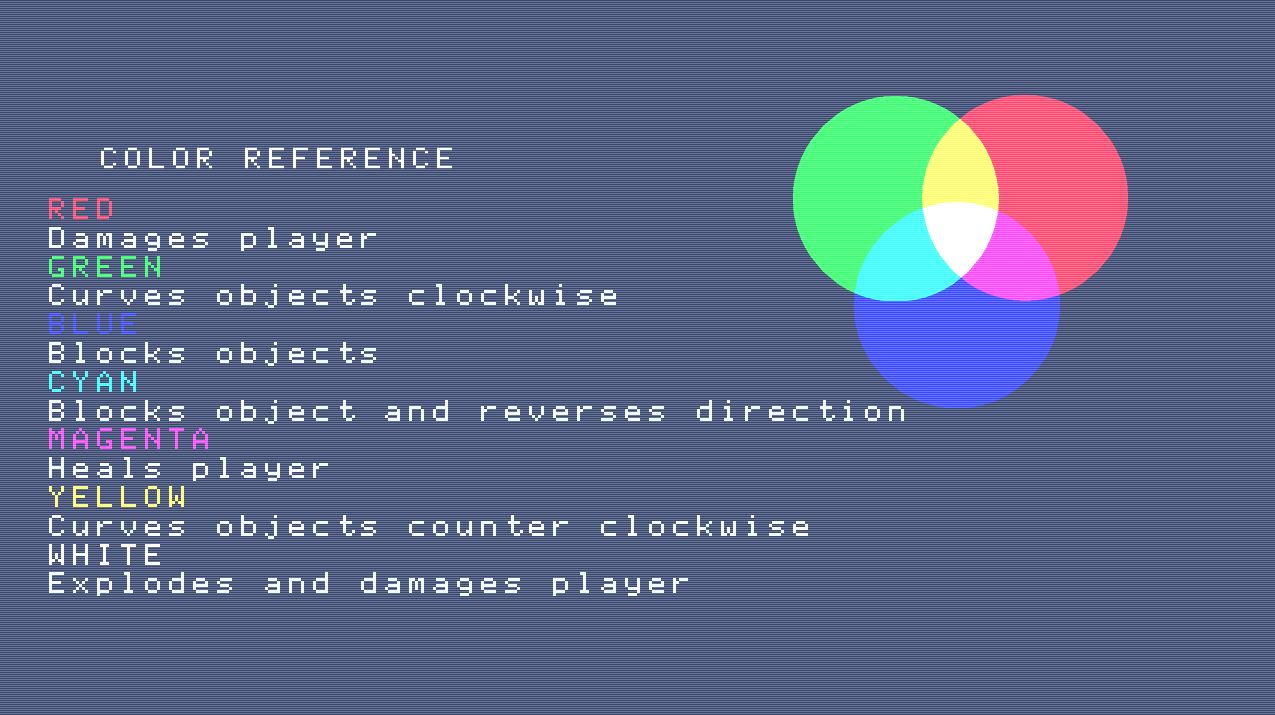 Here's a screen shot of the in-game color reference. It will most likely look different when the game's finally released.