People talk to me. I talk back. Also, some quick remarks as to why Much Madness is taking so bloody long.

Some recent interview-ish things I did around the interwebs:

Wired UK did a piece on the state of the mod scene... and ended up only interviewing me and the people behind Desura. Definitely doesn't represent the (much cooler) stuff happening elsewhere on ModDB and places, but I think it's still a cool article in that it kind of tracks current industry attitudes towards modding. Seems like only the big boys like Valve and Blizzard can sustain the biggest mod scenes.

Meanwhile, Jim Rossignol at Eurogamer looks more at the artistic side of mods, focusing on me and Dan Pinchbeck of Dear Esther fame. Apparently we're frontiersmen! Seriously though... maybe we should call ourselves "alt mods" instead of the hastily coined "art mods"? 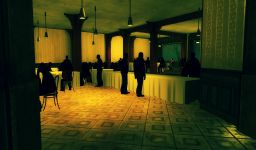 Progress on "Much Madness" is arduous and slow.

Faceposer is broken in the current SDK build, so I can't edit any of the choreography / lip-sync anything / animate James. (The SDK update in general has been a little less than satisfactory so far, I have to say.) I've been working on other stuff in the meantime, trying to get the first half of the mod working properly, but I keep running into problems with my existing implementations and entity setups so then I have to work on new scripting setups and.. blah blah blah.

This week I also polished off a customized build of "Handle With Care" for an upcoming exhibition at Intermediae in Madrid, Spain, which'll be featured with Dan Pinchbeck's Korsakovia and some other cool indie stuff. I've made some gameplay changes to Handle with Care as a result of Robin Walker's feedback at GDC 2010.

You and Chineseroom are the masters!

I think you are actually VALVe in disguise, because you two sure seem to work a lot alike :P

Can't wait to play ep3 though!

As long as it maintains the exponential growth in creativity seen in the first two episodes, take as long as you want.

I just read through your news, and it's such a shame that the Hammer editor strikes when you're trying to make your levels look perfected and Adam-Foster-like.
I hope you'll handle with the problem and can deliver us levels with many details.

"alt.Mod": a scene term referring to cool 'experimental short-form modes' of modding. For the mod designer, this generally indicates an emphasis on:

The main symbol of the alt.modding movement is the radiator.

will you be releasing the altered "Handle With Care" at the same time as "Much Madness"?

Yeah. Along with a slightly faster Polaris. HWC has mostly seen accessibility improvements: the crate goes transparent when you're holding it, the ladders are more prominent ("what ladders?!"), the delivery room door is wider to accommodate some peoples' weird playstyles that don't work, fixed some language typos, L3 is easier... at its core, it's still mostly the same though.

ok hears the thing valve is not working on HL2:EP3/HL3 but this guy is working on his stuff so give hem credit (note valve is only working on there up-dates)

Duke Nukem apparently... maybe they should have waited another ten or twenty years so that it would be any good.