Hey, did you know that there are pretenders in vanilla Stellaris? An event triggers if your ruler dies without an heir and creates pretender factions that try and install a pretender as your leader. The problem is that the event fails to create the factions almost every time. Also, the faction itself is... lacking:

Only one pop is added to the faction, and the only support effect is a 5% chance per month of removing said pop. My guess is that someone at paradox was toying with the idea, but never got around to finishing it.

Anyways, I went ahead and fixed the event, and revised the faction a little:

I copied the 'Civil Disobedience' effect that I made for revolutionaries, so that the faction poses some kind of threat. Attrition is now triggered whenever support increases, so that it scales with the number of members. Installing the pretender previously cost 100 influence. I added a happiness penalty for everyone who is not part of the faction for a while after a pretender is installed. And because the faction shrinks over time, this makes a wait-and-see approach riskier.

So I suppose it's not quite as deep as the new rebel mechanics, but it adds a nice little challenge for empires to deal with now and then. Speaking of, I made some extra additions to empires while I was at it! 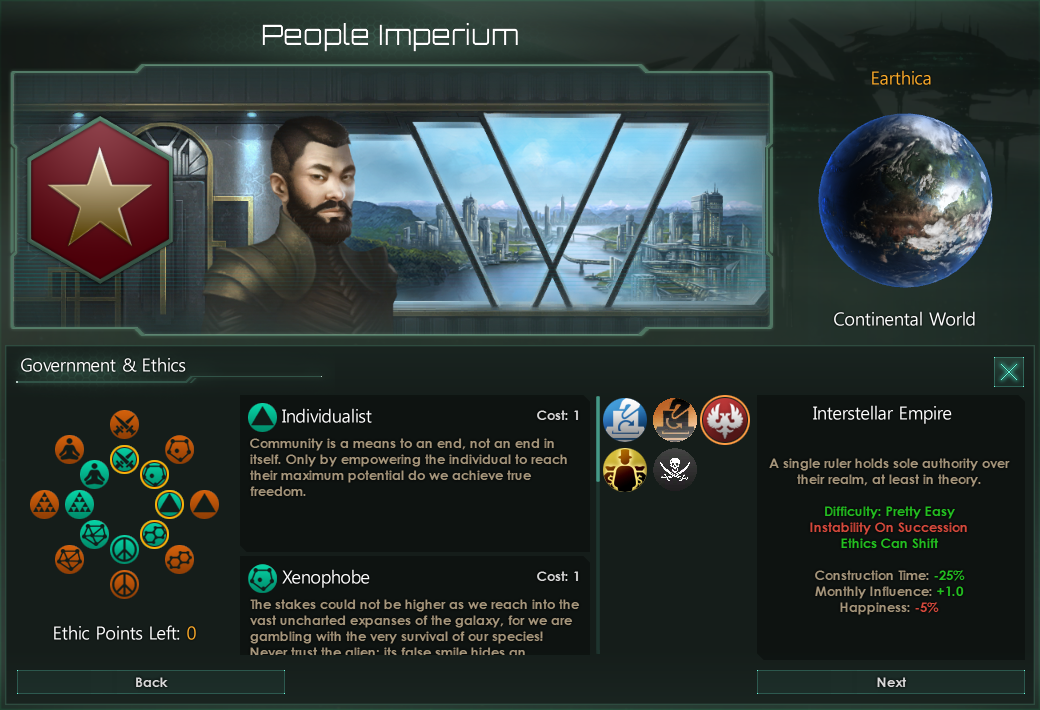 As a counterpart to the democracy political parties, empires can nudge their ethics once per ruler: 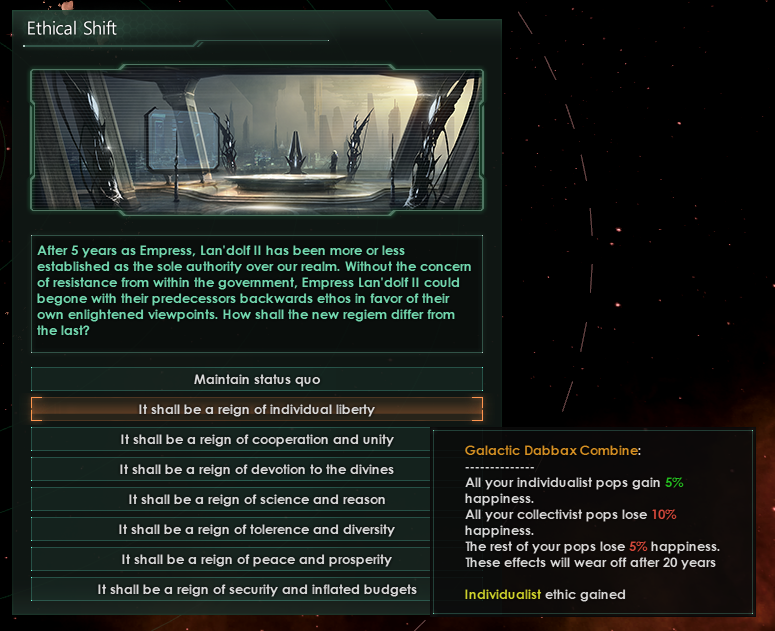 This is much more controllable than democracies, but the happiness modifiers still make it a risky endeavor.

For the times when you can't/dont want to wait for your ruler to die, you can stage a coup d'etat by enabling a special edict that will trigger the following event within the next few years (MTTH 6 months): 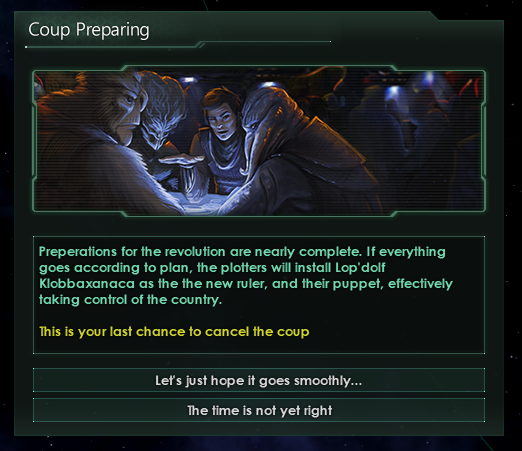 If you go ahead with the coup, a series of events will trigger that will either end with the plan working, giving you a short term happiness penalty (nothing unmanageable), or the plan encountering one of a couple possible disruptions, which will cause some extra bad to be piled on top. Is all cases though, you still get a new ruler in the end.

So empires aren't totally revised, but the great news is that pirates are basically functional :D. They are missing most of their localisation, which means no screenshots for now, but I can show a few new 'universal' systems that tie into them pretty heavily. 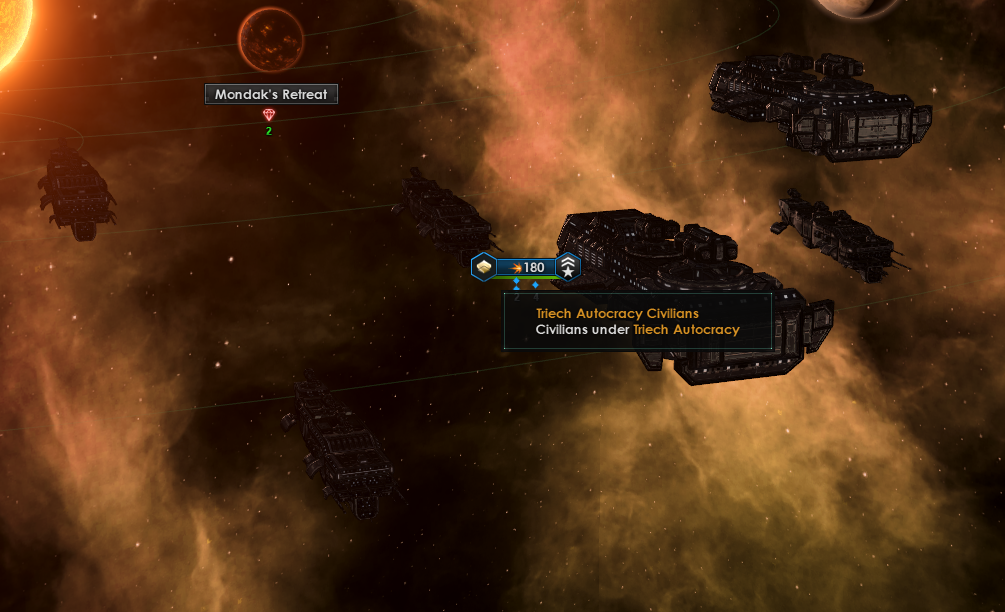 Civilians in SZ won't be nearly as deep as you would expect from say, the Civilian Trade mod. That's because the focus isn't around creating a civilian economy, that's currently outside the scope of this mod. Rather, civilians are included to add a little extra aesthetic life to the world (which was my favorate part of Civilian Trade anyways). But more importantly, to give pirates a viable target to attack.

If civilians are destroyed, their owner loses a few resources regardless of who killed them. Pirates can plunder some of these resources though, which due to some harsh economic penalties, makes this ability more of necessity than a luxury for them.

Anyways, one more thing I want to cover! 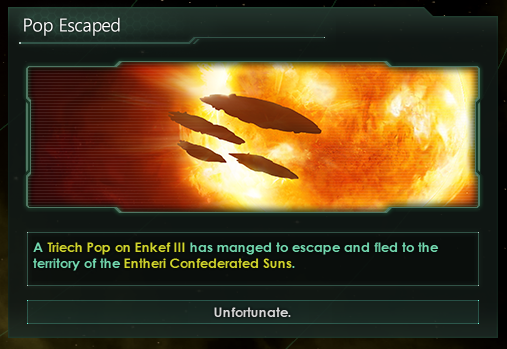 A pop will escape and seek asylum when one of the following conditions is met:

A pop seeking asylum will look for a planet that has an at least reasonable habitability for the pop (>40%) and owned by an empire with the "asylum provided" policy active that has contact with the pops previous owner. The empire they attempt to move to will then get the following event: 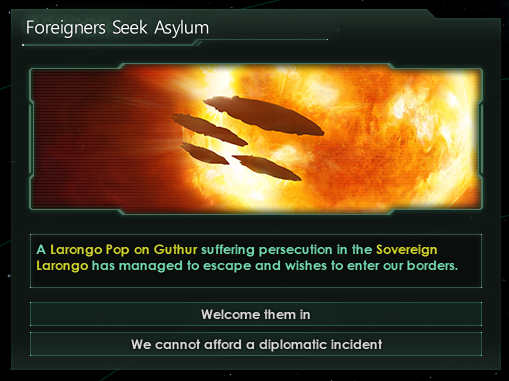 Letting them in will cause a slight relations penalty with the previous owner and cause the pop to adopt your ethics, refusing them will send them back to their owner and instantly disable the asylum provided policy, making you wait for the policy cooldown to expire before you can let anyone in again.

It's worth noting that pirates can never refuse asylum, what with them representing outlaw safe-havens more than actual unified nations. This makes playing a xenophobic pirate enclave... rather interesting.

Sometimes, the pop won't be able to find a viable place to go, in which case: 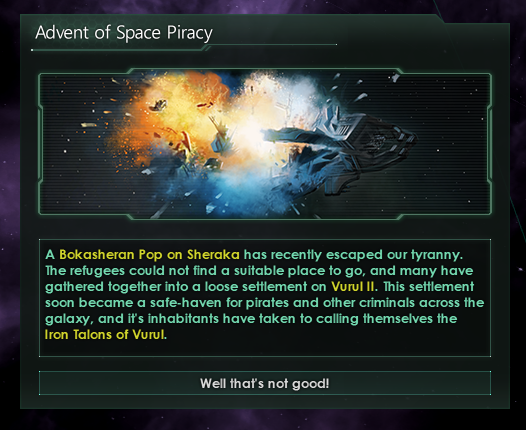 One last note: I've had more than my usual share of real-life disruptions from working on this mod over the course of development so far. I went ahead and added a few extra days to the initial release date, but I think a few extra days of polishing will be worth it ;)

I'll make an article detailing how pirates work soon, see ya then!