Rebels are being overhauled, here's how it will work.

So I decided to leave empires and fallen democracies without much special flavor because I would rather spend the time on other aspects of the mod. The good news is, those 'other aspects' are pretty sweet! Mainly, the new rebel mechanics. 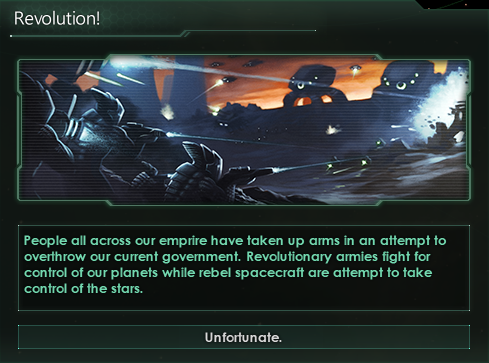 Wow, where to start on this...

Although I'm primarily going to be talking about revolutionaries (a new rebel faction type), most of these mechanics will be applicable to separatists as well.

The first effect that revolutionaries can trigger is "Stage Protest", it will trigger the following event: 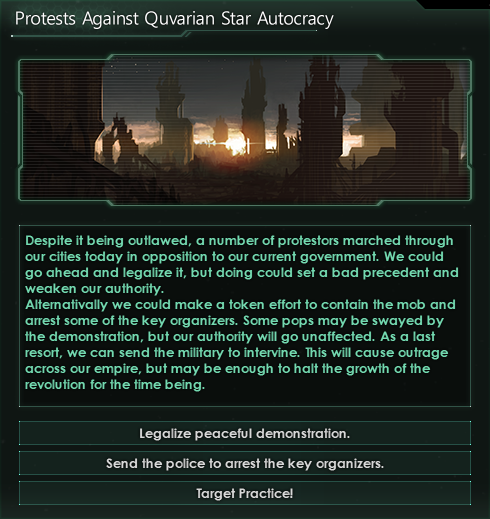 Protests will cause some random pops to gain the "Moved by protest" modifier. It will cause those pops to be more inclined to join the revolutionaries themselves. The number of affected pops is based on the number of pops in the faction. The protests also cause the faction to lose support, so they act as a way to keep small rebel factions from revolting before they are ready.

There is also a new policy letting you set whether or not protests are legal. If protesting is legal you have only one option (let it happen), but if it's illegal then you have the following options on how to respond:

Once the faction has enough support then they will trigger "Civil Disobedience". This is basically a renaming of the "Strike" effect, the main change being that only members of the faction will have reduced output (rather than the entire planet/sector/empire).

Another thing to note is that civil disobedience will NOT trigger if you have martial law active. This adds an option for countering it, with the downside being that martial law reduces happiness, so it may increase the size of the rebel factions.

Then, there is the actual rebellion, which deserves a section of it's own at this point.

The first change is that 2 rebel armies spawn per rebel pop. This might seem harsh, but factoring in that the rebels have to fight garrisons/cheap defense armies/any high-tech armies you have, and that one 'army' probably contains way fewer people than one 'pop' does, I think it's fairer, more realistic and just more fun.

If/when the rebels take over a planet a number of things happen. First, a civil war starts: 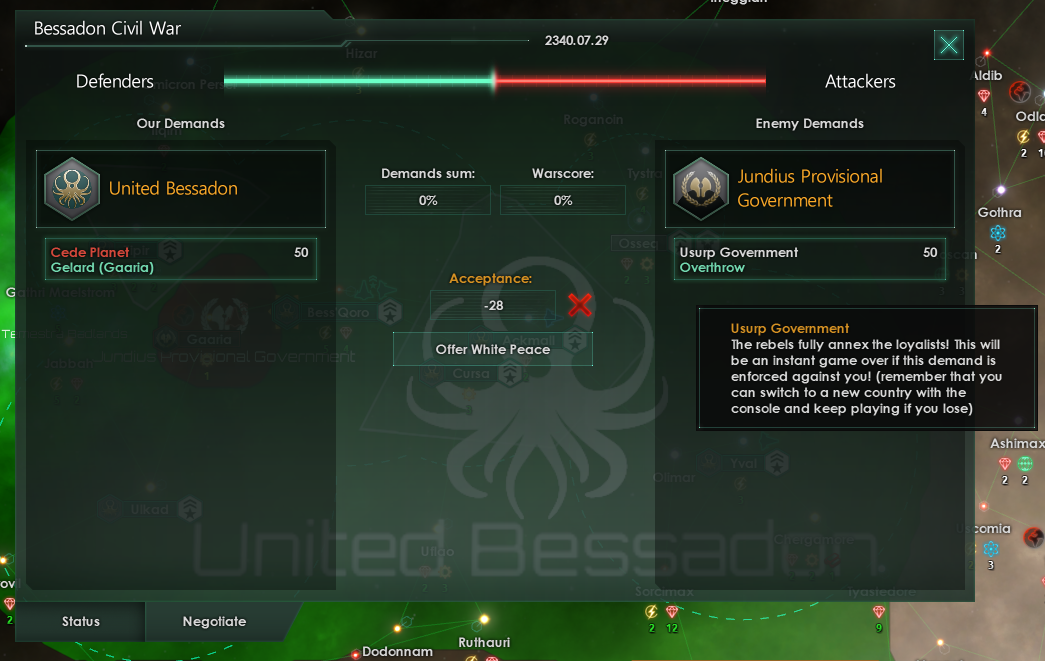 The rebels start out as a "Provisional Government". They will hold an election after a year has passed to determine their government type. Most pops will vote to become a democracy, fanatic militarist-individualists will sometimes support becoming a pirate nation (very rare), while collectivists, xenophobes and spiritualists tend to prefer empires over democracies.

The rebels will also receive free ships, with the number of the ships being determined by the number of rebel pops. As a rule of thumb, it takes about 1/5 of your population to rebel for the rebels to have a competitive fleet. 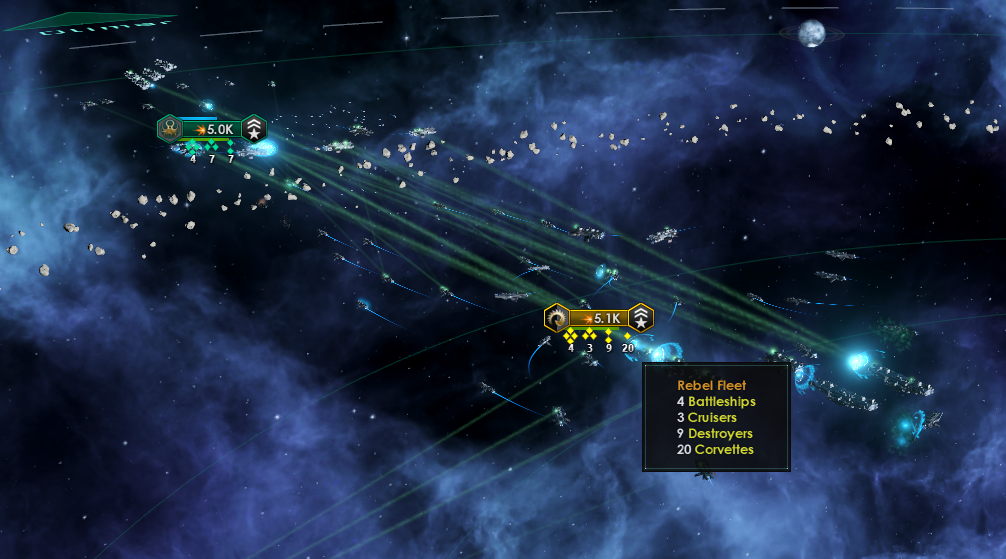 Shortly after the civil war has started, all non-subject empires that have contact with the rebels will get the following event: 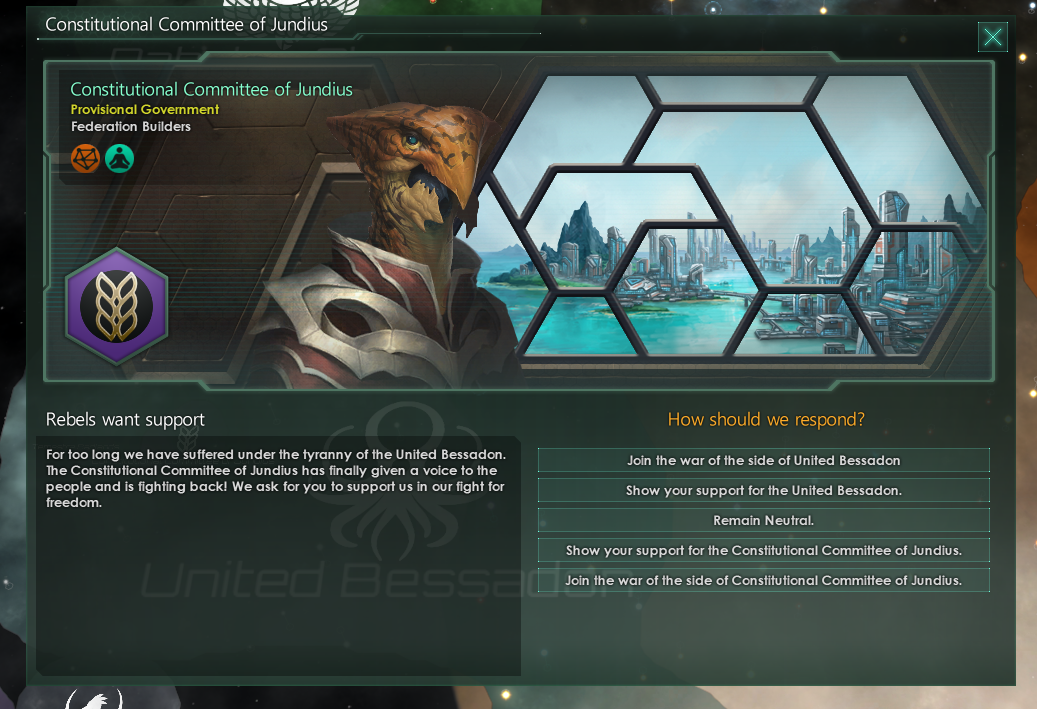 You (and everyone else) will have the chance to take sides in the conflict. 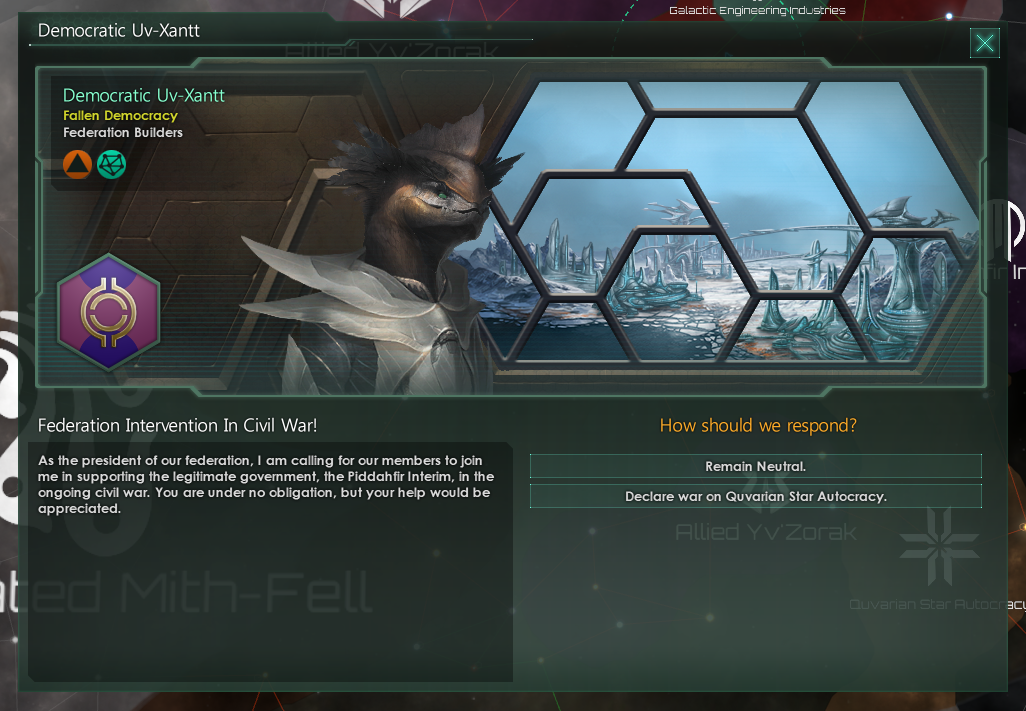 So those are the main mechanics for rebels. I said I would talk about authority, so here it is!

Authority represents how willing your people are to listen to your government. The lower it is, the more willing pops are to join rebel factions. There are a number of things that can reduce it including:

Authority goes up slowly over time. There are a few other special situations where it can be increased quickly, but time is the main method.

The goals of this system is to model the destabilizing effects of abandoning authoritarianism too quickly and to add a way for empires to slowly decline.

So wow, that was a big post! So like I said, empires are gonna be pretty generic in the initial release, but I think the new rebel mechanics more than make up for it.

Pirate nations and private colonies are the last big things on the to-do list, so I think the mod is on track for a playable release early next month :D