It's time for a short progress report on Lockdown Protocol's development since the first beta version released before Christmas.

The first beta version of Lockdown Protocol was released just in time for Christmas and I have finally received a bit more feedback on the game. In addition to direct comments from people, Softpedia wrote a review of the beta version. Based on the feedback, I have been making some changes. Nothing radical, but tweaks to alleviate gripes and issues people have faced.

I have added a full-screen flash effect when the player character takes damage to make sure you notice if you're getting shot. It also seems to make the hits feel more "painful": 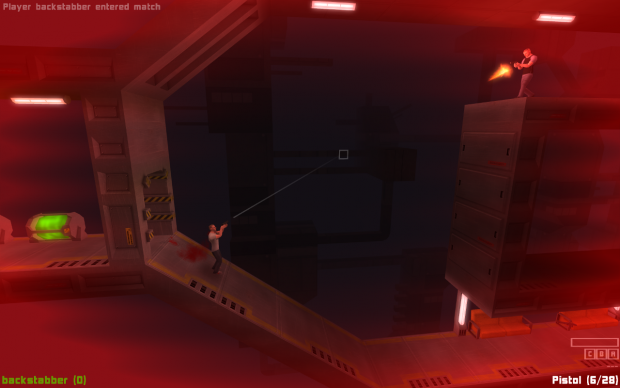 Guard AI has been changed so that it now randomly misaims a little. Previously it always aimed perfectly and only the inaccuracy of the weapon prevented guards from hitting their targets every time. This change makes the them less deadly, especially at long distances.

I'm currently in the process of going through all levels and making minor adjustments. There will be more checkpoints, so that you don't have to restart so far away when you die. In general I try to modify the levels to require less walking through already cleared empty corridors. I will be placing a few more enemies here and there too.

Here's some video footage from the first beta version:

The latest version is available on the website. I probably won't be making any huge changes at this point, but all feedback and comments are still very much appreciated.