This news post shows some of the recent progress towards the completely overhauled weather structure, and gives you a little insight and information on the development of this L.U.R.K.

Posted by holdenmcclure on Jun 2nd, 2009

Unfortunately, as much as I've endeavored to make community input a primary part of development, I've had to drop off most suggestions for the most part, however it should be known that major changes have been made according to community suggestions.

I wanted to be completely open to community suggestions, but everyone is always in conflict about adding and changing certain things, and sometimes they're just poorly conceived ideas. There's been some huge changes from community input, the most major would be dropping Oblivion Lost abortion code in favour of keeping certain portions of it, ala the poll on the website that I've neglected to take down despite it being long since closed:
Getoutofherelurker.blogspot.com

Another major thing would be the AI. I was sort of stretching the truth on the original premise that I built on the AI for L.U.R.K.. Due to the community reception and the huge boost in attention from the AI demonstration, I was forced to spend an unbelievable amount of time creating parameters that would make the AI fully functional and dynamic according to lighting rendered from the game, while maintaining consistent visual appearance in conjunction with the way the NPC's perceive the world, for instance, fog and shading rendering isn't taken into account with the AI when detection parameters are decided, however it's almost entirely dependent on weather.

It's funny how because of the way Stalker functions, which basically applies a broad blanket configuration for nearly the entire game excluding scripted sequences. This is beneficial in the sense that the AI detection parameters in L.U.R.K. change the way the game is played throughout the entire game, however it was a daunting task, because introducing more variables to a game like this complicates the situation immensely, because you can't allocate AI functions to certain areas and NPC's. So naturally creating dynamic light visibility gives rise to more conflicts I could have imagined.

The light visibility parameters work fine in games like splinter cell where detection is scripted, however the way L.U.R.K. functions is completely new and unprecedented, because it's entirely self-sufficient, however it was by no means an easy task.

One of the major issues as stated was the difference between simulated NPC vision and detection, and what's actually perceived on screen. Since there are many, many more variables that contribute to the rendered image on screen, as opposed to what's taken into account with AI, it became a major burden realising what they could and couldn't see. For instance, fog is ironically used as a lighting method for Stalker, instead of what the actual term would leave you to believe. It provides a matte lighting finish across the landscape, rather then being a smoky substance that obscures your vision.

It's more of a color overlay that anything else, and while it provides a rich saturated uniform saturation, it creates conflict with the AI. For instance, in circumstances where you're in a room that the AI perceives as dark, the fog overlay brightens the room, making everything clear to the user. However the AI doesn't perceive this phenomena, and they bumble about in the room trying to find you in clearly lit rooms.

As a result of which, I had to start working on the weather configurations, balancing the fog parameters with deeper ambient lighting, to give a more appealing visual aspect, as well as giving AI the proper variables for detection in ambient lit rooms. Naturally I had to go over every weather cycle possible, I had to learn the ins and outs of every variable, balancing the AI detection with the visual aspect.

Then there were more issues, increasing ambient light left the saturation in non-directly lit areas to ambiance is dependent on the color of the skybox, which turns out to have more of an impact then a simple texture.

The issues that I encountered as stated before were a matter of the difference between all the factors that contribute to the image rendered on your screen, to the factors that create the simulated vision for the AI. Obviously GSC, and other modders simply gave up when they realized how many factors were involved in accomplishing dynamic AI parameters, because the standard AI settings compensate for this by simply giving super-sensory hearing to AI, and giving them vision beyond that of any human, and they simply made the nights a sort of psuedo-darkness to compensate for this issue.

However we're taking this a step further, and realising this feature that was clearly dropped by GSC, we're picking up where they left off. That has entailed more then we could have imagined. This of course meant that not only did I have to overhaul the sunlight, the ambient light, the skybox textures, the fog parameters, and the AI parameters, I had to make the lighting, the AI, and the visual appeal completely dynamic and consistent at the same time, which is a tremendous task, and most of our work is being placed into that task.

The more things that change, the more things that become broken by the other things we change, and while that was alright, I just had to start tweaking the original compilation into something I ultimately felt responsible for, and that has made L.U.R.K. into what it is. A mixture of an autistic level of perfectionism and attention to detail, combined with a chain effect of overhauling in order to balance, and subsequently overhaul every aspect of the game in order for it to function properly.

So what exactly have I done then? Well I'd have to say incorporating Dynamic Weather is more responsible then anything for my recent workload. Initially I had planned to use the aesthetic aspect from the static weather build, and apply it to the dynamic weather system to create a sense of depth and realism, while making it less repetitive.

This was an undertaking beyond what I had possibly imagined. What I realised is that not only does that increase the workload for balancing AI and lighting consistency 10 fold, but I also have to start texturing in photoshop to make more skybox textures.

The reason I had to design more skybox textures was a simple issue I neglected to notice. Dynamic weather has about 5 times the amount of weather transitions that any other weather system employs, and as a result of which it uses tons and tons of skyboxes randing from modder work from Stalker Skies by Cambrogal, to Clear Sky ported skyboxes. However these in the end looked much less appealing then the skyboxes I was using, why? Distant landscape. It hit me like a train. Not only were there these stupid issues from Dynamic Weather, such as negating sunlight altogether and using fog as lighting in cloudy weathers, which not only broke the AI foundation from L.U.R.K., it also looked terrible in cloudy days. Because it basically created a static lighting effect for the world.

So here I am, stuck with one beautiful weather cycle, being randomly transitioned into shitty, shitty looking inconsistent weather patterns. Since I'm from /v/, I have a tendancy to shy away from large tasks such as this, however I had already promoted the ass out of the dynamic weather aspect, so I couldn't simply drop it and say "Sorry guys I don't want to do it because it took more work then I imagined", so now what's happening exactly?

Well the bad news is this. The release date was supposed to be around, well today, but that's not the case anymore. All of the major work that's been put into the L.U.R.K. so far has been completely based around completely restructuring the game balance from weapons, NPC Loadouts, etc. with all the new features we incorporated.

Then I end up jumping face first into a cluster of issues I didn't even plan for because I was hasty with PR work. After the promotional video, the images depicting the weather cycles, and all the pretty images that clearly depict the graphics in L.U.R.K. that would send Stalker Complete '09 crying to its mommy, the internet took interest, and a Stalker mod built without so much as an SDK took rise to 5th place out of 9400 mods on ModDB after a news update regarding our plans.

So now I have to push back the release date dramatically because I've had to restructure the graphical aspect completely to be visually appealing, consistent, and functional. Although now, I've decided to restructure the weather to be better then any other claim to fame weather overhaul that's keeping the likes of Trojanuch and Nanderson on the edge of their seats, these are the people who ported dynamic weather from Clear Sky, and made Weather Overhauled people.

Here are some images depicting some of the new skyboxes, and before you tell me, yes I realise the skyboxes aren't aligned with the sun, I'm just showing them off, I haven't made the configs surrounding them yet: 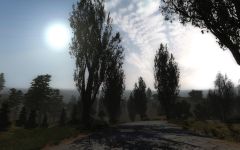 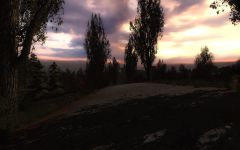 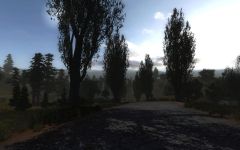 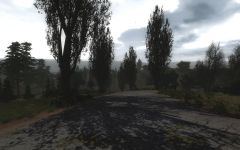 Sounds like really really much work, though the more you work on it, the better it gets, right?
I'm really looking forward to this. Keep up the awesome work!

You said on /v/ it'd be released today.

I did no such thing

Well then somebody must've been impersonating you.