An overview of the procedural generation system for ANSI faces in URR!

Posted by UltimaRatioRegum on May 2nd, 2015 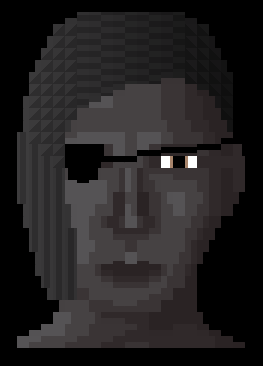 Ok, so a little about the system. I basically wanted a system which adhered to four (five) major objectives. Firstly, it should be massively varied, and even if you spend a decent length of time just looking at the ordinary people in the street, it should take some time and under you see any two people who are identical. Secondly, it should be demographic – which is to say, each nation can have a set of preferred hairstyles, likely skintones, other signifiers (like turbans, tattoos, jewelry, etc), and these should be distinct in each nation. Thirdly, and following on from the second point above, there should be enough of these that (much like everything else in URR) you should be able to gain visual information: when you meet someone you’ve never met before, you should be able to make a reasonable guess about their nation of birth. Fourthly, any combination should be possible, as a means of undermining the idea that only “primitive” peoples will be found with certain cultural signifiers – in one game perhaps the people in the most technologically and militarily powerful empire all have extensive facial tattoos, for examples. Fifthly (I suppose), the objective was to make them look visually and aesthetically interesting, and striking, and distinct: as with everything else in URR, if I wasn’t able to make face generation look enough to meet my standards, I’d have just cut it.

I’m not honestly sure how many variations there are (since some variants cancel out other variants in the generation process, making the simple solution of just multiplying everything together inaccurate). Roughly speaking there are nine skin tones, thirty hairstyles for women, thirty for men, a dozen different forehead/chin/nose shapes each, a dozen hair colours (which are genetically placed around the world and are toned appropriately to reduce contrast with skin tone), four eye colours (likewise, genetically varied around the world), several dozens beards (for the gents), and then a massive range of other visual identifers. There are five below: paint/dye markings, turbans, brands (sometimes consensual/cultural, sometimes as identifiers of slavery), facial tattooing, collars (always denotes slaves), scarification, and a bunch I haven’t shown here. There are also some rare additions like scars, eye patches (like the lady at the top of this entry), and some other neat and extremely rare properties as well. These will always tie to that NPC’s history, so someone with an eyepatch will have a distinct event in their past where it was lost – you can sometimes, therefore, get a bit of “personal” data from someone’s face, as well as cultural/national/etc. 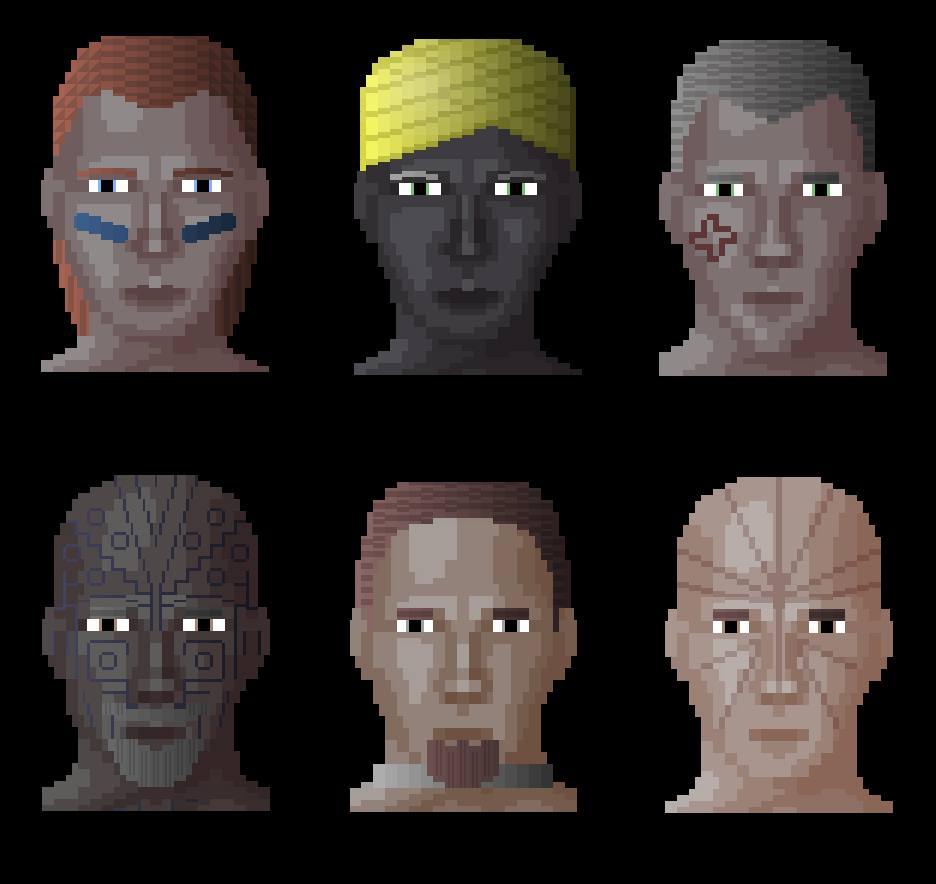 When you ‘l’ook at an NPC, you’ll get a new range of screens to cycle through in this coming release. If you’re currently in combat, it’ll automatically go to the screen showing their health; if you’re not (which will obviously be the case in this release) it will show you their face, and a little bit of data. There will then a list where you can scroll through everything they are wearing and bring up the appropriate attendant images for all of those (clothing, shoes, any holstered weapons, jewelry, etc). I’m going to remove anything you could not “physically” determine, until you know for sure: which is to say, an NPC’s lookup will never state their affiliations, unless you have explicitly talked to them and found out (though they might have lied…) or someone else has told you. Here’s a spectrum of the skin tones in the game, with a bunch of hairstyles and beard styles (where appropriate). Alpha Centauri players might also note the worrying but entirely unlpanned similarity of one of these nine women to a certain Sister Miriam Godwinson…

And that glorious image pretty much concludes this entry. I’m currently working on a bunch of optimizations for the game – primarily in terms of how data is saved, and the efficiency of the rendering and line-of-sight algorithm, since this needs some serious improvement so that you can see further than a couple dozens tiles in front of you. Once that’s done (which hopefully won’t take too long) I’ll probably get working on clothing generation, and then doing some major work on families, family trees, and how NPCs should be stored for remaining still and/or moving around the map, as an important precursor to getting them actually spawning. See you all next week! In the mean time, you can keep up to date on my devlog, Facebook page, or Twitter.

I'm really impressed, I wasn't prepared for you to tackle facial generation, and the result is really cool.
I have a minor complaint though, and that is with the female hair, as the retreating of the hairline on both sides of the front is a trait which is distinctively male, and whilst in the real world there may well be some women which show some retreating of the hairline, I would strongly advise against using it in the portraits when there are little other features to differentiate between the genders.

Thanks, that's awesome. Hmmmmm, a very interesting point. I'll take that out and see how some of them look!

I did have one that looked strikingly like Santiago, too, but I failed to save it :(

I think they look a little bit similar but I am sure you will find ways to increase variation in the future. Great work as always.