The world of Empyrean Rule is a living breathing world, in a fantasy setting, where AI and player controlled regions with cities and other improvements evolve or deteriorate depending on the players' actions. It is a a world of politics, resources, diplomacy, trading, influence, control and warfare. Players can affect the game world with many ways and today we will discuss how this is done.

In Empyrean Rule - Rise of the Ancients, players assume the role of a General who can free roam with his army in a massive persistent world along with other players and AI Generals. A player can choose from a great variety of fantasy races, unit types and heroes to create an army with unique abilities, stats and spells. Generals, units and heroes gain experience and they gain new skills and abilities. Players can live the life of a mercenary army providing their services to AI Guilds/Empires or player controlled Guilds/Empires, or form/join a Guild with other players to forge an empire. War of course is inevitable and battles in Empyrean Rule are very often.

Here is a battle between two members of our team. This is from a very early build of the game and it does not represent the final product of course.

The world map in Empyrean Rule is massive and it is divided into regions with borders to separate from each other and each region can have cities, fortresses and resources such as grapes, furs, iron, copper, gems, logs, etc. A Guild can conquer a region and while under its ownership, it can be upgraded and developed to grow and provide bigger benefits to the Guild. To give you an example, resources can be utilized and improvements can be built on top of them (eg. the iron mine on top of an iron resource as shown in the screenshot), watchtowers can be upgraded to provide defensive capabilities to the Guild, roads can be built to allow trading caravans to travel faster to their destinations, etc. 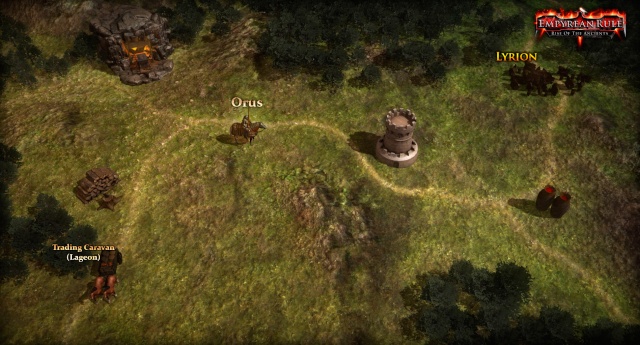 Each player will be represented with an Avatar when moving on the world map. Orus, one of the members of our team, chose a Human General, and thus he has a knight as an Avatar. Players on the world map have a limited field of view, which means that they cannot see the whole map, but only what is in close vicinity, so be careful because not all players are friendly! It is important to remember that AI armies are also free roaming and some of them may not have the best of intentions. It is a cruel world out there!

Although a single player cannot conquer a region by himself, he can still inflict damage to a region/Guild/Empire by either raiding their trading caravans or harassing their forces. Hostile operations in a region can have a severe impact in its economy and it can affect its development or even lead to deterioration if the negative effects are for a long period of time. A group of players, either as a Guild or simply as a group of individuals with common "interests" could lay siege to a defenseless city or even towers and drive the owners away from their lands. It won't be easy, as the defenders could call their allies for help, but it certainly can happen if the attack is well organized.

So, why is it so important to own a region? What are the benefits for a Guild to own a region? In Empyrean Rule, the economy is player driven with all items and products produced by players. Production can only be made in cities and each product requires specific resources and buildings to be produced (eg. Iron weapons require iron and a blacksmith). Each product has its own usage, but they can all be traded. For example, units and heroes of players' armies can be equipped with items such as armor, weapons, banners, etc. and cities require to have a continuous flow of specific resources to make sure that they will not deteriorate. Also, owning a region opens a wide array of other options to the Guild such as creating AI armies to protect the region or even attack other regions, conducting diplomacy with other Empires, espionage, issuing quests/contracts to other players (eg. protect/raid a known trading route, kill a specific player, etc.), etc. Guilds can of course own more than 1 regions, adding more resources to their disposal and having more production capabilities. However, the more an Empire grows, the more enemies it will have, as resources are scarce in the world of Empyrean Rule.

So, what will you do in the world of Empyrean Rule?

Will you become a mercenary or create a Guild and forge an Empire?