It's time to tell you about all upcoming changes - so buckle up, as there is a lot of cool stuff incoming!

For the past year we held five open tests, and each gave us new important information about different aspects of the game - sometimes disappointing, but more often - surprising. We spent much time discussing what exactly Starfall Tactics should look like and what it can become. The Team can not wait to launch Starfall Tactics, but we have postponed this moment for a while, understanding that there are not enough content, some technical issues to be solved, some mechanics to be tweaked, and there are many more ideas that we want to check and possibly add to the game. Starfall Tactics was at the Pre-Alpha stage precisely because we were primarily engaged in research and checked various mechanics. And today we are happy to inform you that most researches are completed, we see the form in which the game should be launched well and we have already started developing the Alpha version of Starfall Tactics! It's time to tell you about all upcoming changes - so buckle up, as they can touch on some game aspects you could have already gotten used to.

For a long time now our game has been trying to combine two completely different, interesting, but poorly compatible parts: an MMO, where progression and exploring are very important, and a rating session-based game, where players must compete in 100% equal conditions. After the last test and the tournament we have held, we came to the decision to split the game into two general modes. 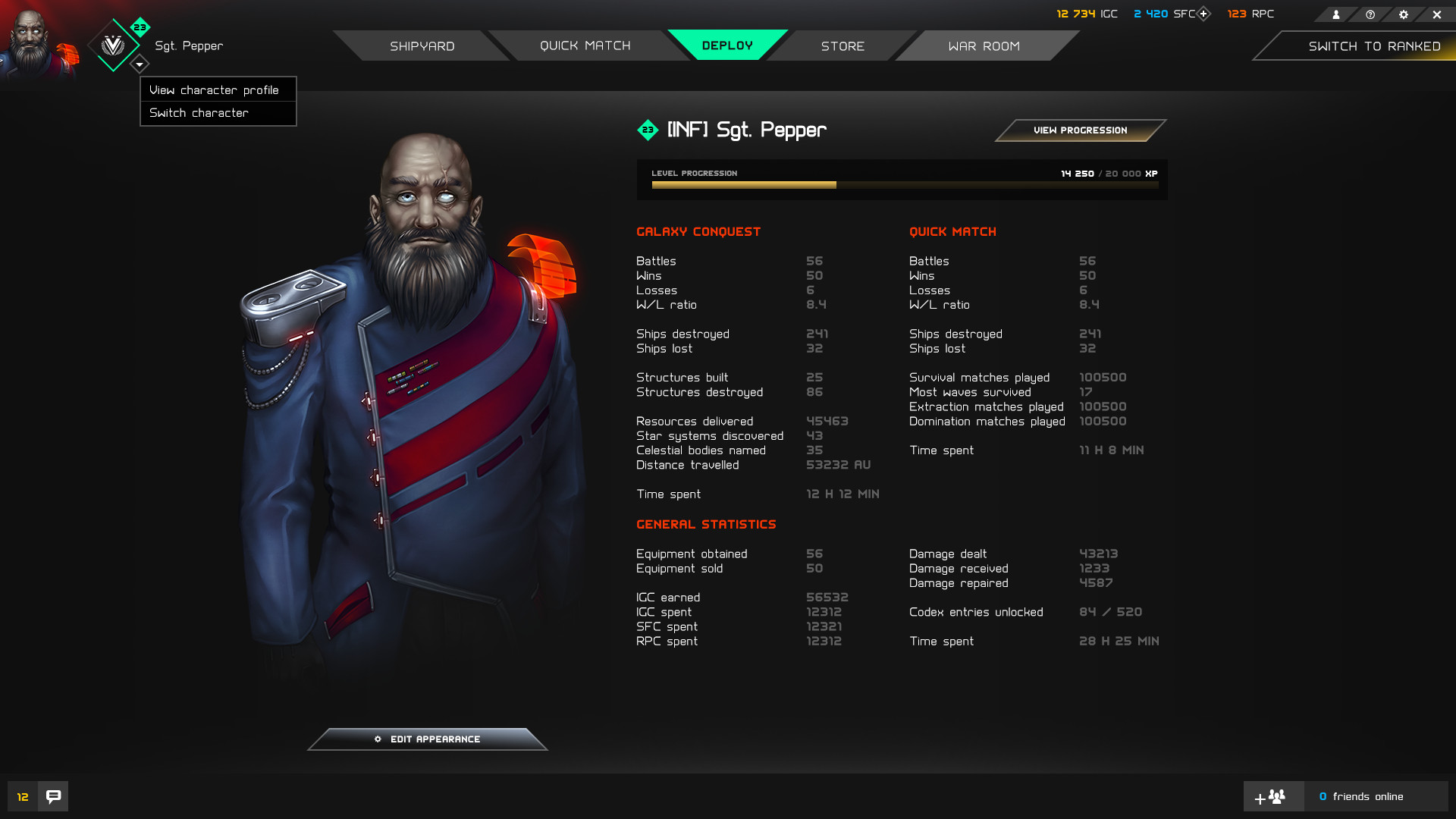 As in many MMO games, now you will be able to create a character, customize it, give it a name and, of course, choose a faction.

In Starfall Tactics, Character is a Commander of your flotilla or detachment in the Galaxy Conquest (MMO) mode. Now its creation is a necessary step to start the game, like the choice of a faction - it is also obvious that one commander can not manage fleets of several factions at once. Here are more info about it:

Besides, every character gets his own space shipyard where you can create and store your ships: as we are adding Commanders with a strictly defined faction, there is no need to create several fleets any more - customization menu will change significantly, including visual part (sure, it's going to be beautiful!) 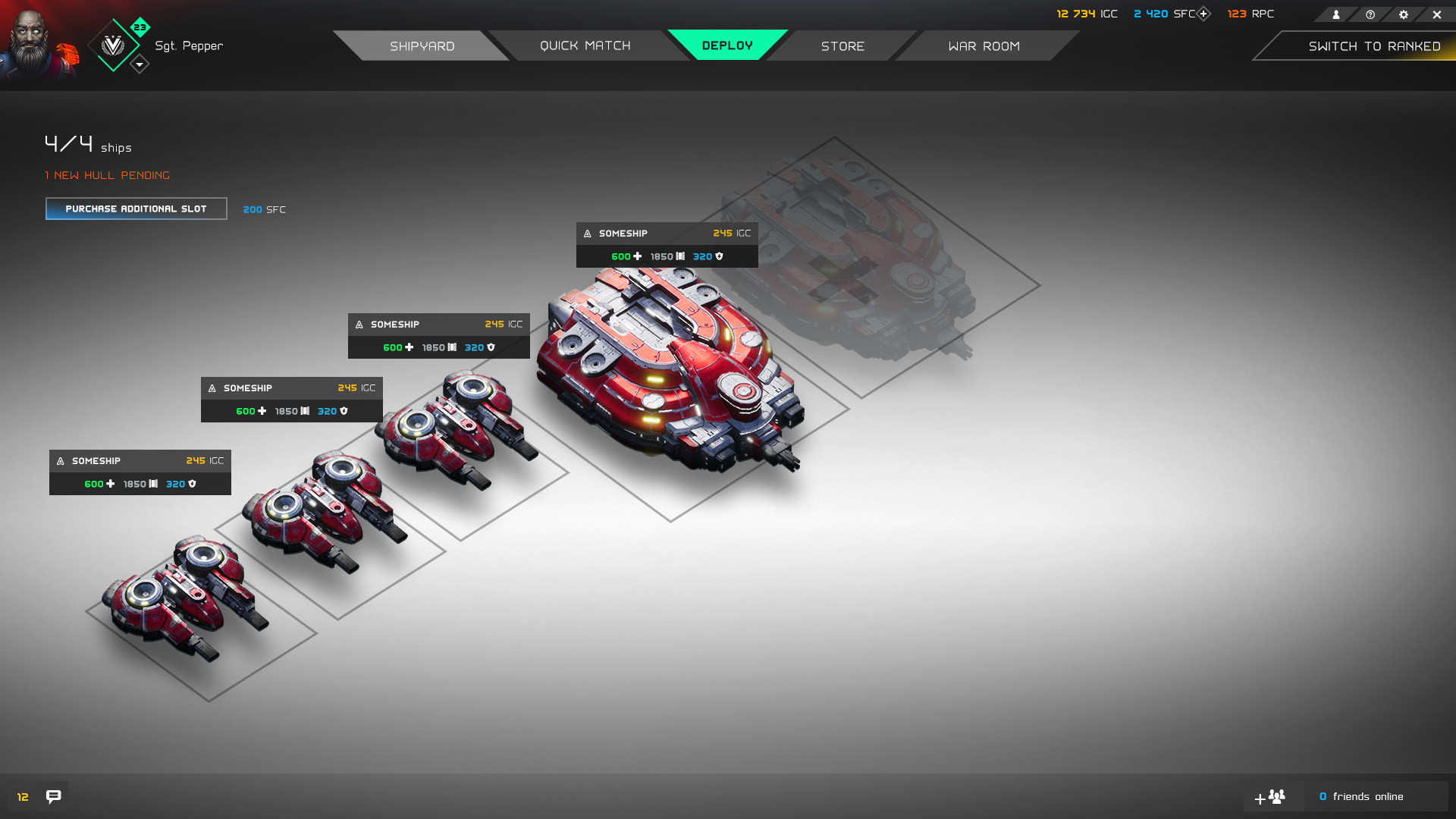 In a Shipyard you can construct ships - just like you did in fleet editor before. And while maximum fleet size is still limited, you can have many more ships docked in your Shipyard - quantity partly depends on you Commander's level and other factors. At the same time, Detachmnent concept remains unchanged: before leaving on a combat mission, Commander takes only a certain set of ships from all available at the Shipyard. 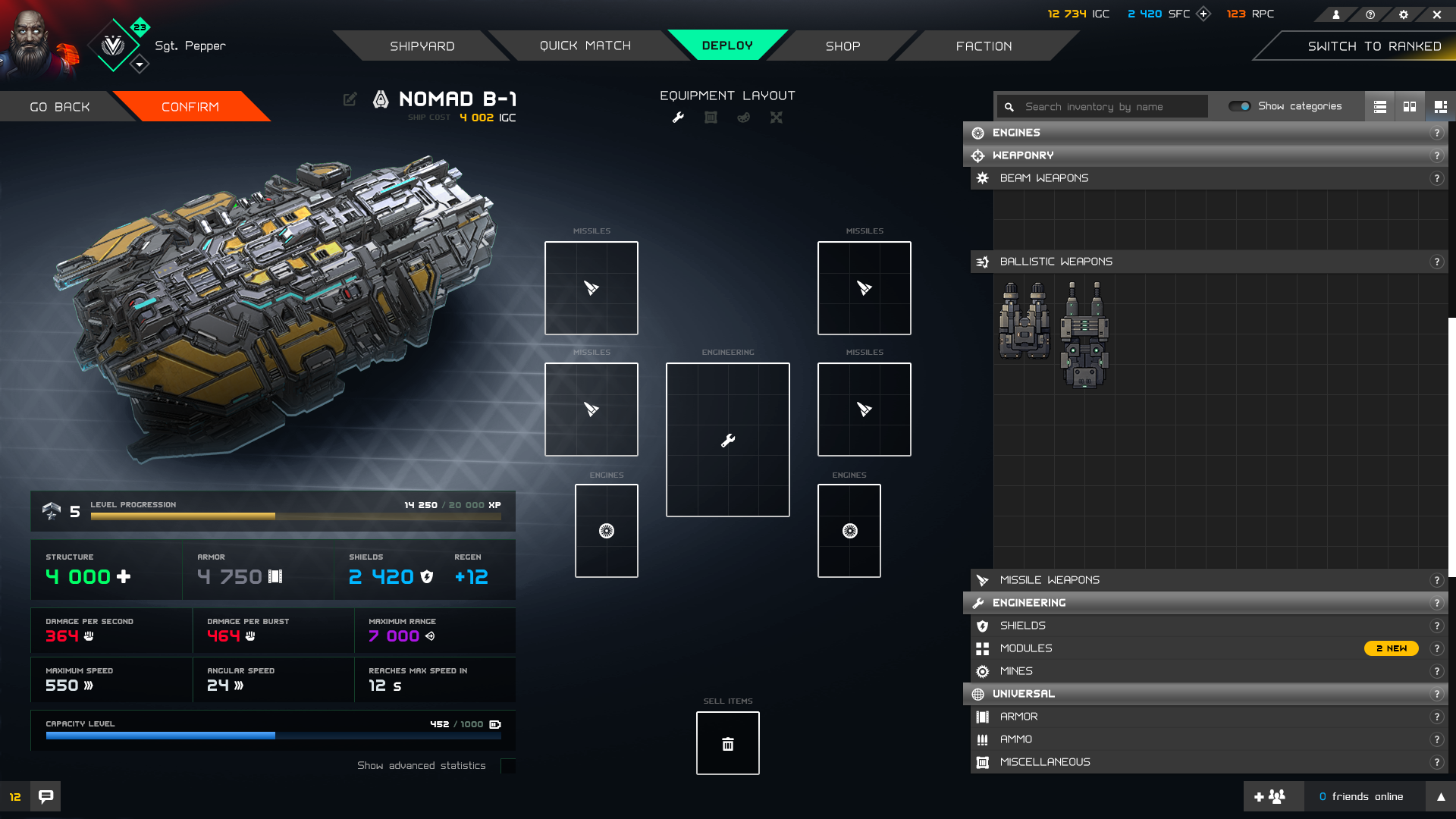 So, we came close to one of the most significant (in our opinion) changes - blueprints. As we already mentioned above, there is a lot of new content incoming for the MMO part of Starfall Tactics: there are some plans for the questing system, new NPC factions, stations, House features, a variety of opportunities for exploring the Galaxy and the already mentioned crafting system, along with resource extraction. And in order to provide you with more familiar MMO experience, especially by getting new equipment from challenging battles against bosses, rare merchants on the borders of the Galaxy, we decided to abandon the blueprint concept. Now, instead of 3 blueprints, each booster pack contains 10-15 pieces of various equipment with a total cost exceeding the IGC cost of the booster. In general, there is a large number of ways to get modules now, and you have even more chances to get the exact module you need for your fleet:

And that's not all! There are Black markets, ability to rob other Commanders, merchants, do quests and so on. At the same time, modules themselves won't change - more rare technologies will still not give you a significant advantage - just variety in choosing tactics.

Due to many innovations in the MMO part of the game, which include crafting system and the ability to extract resources (we will be telling more about it in next articles), most technologies in Starfall Tactics can now be crafted - first of all - ships. For example, to build a ship, you will need to get a ship project (can be found on the vasts of the Galaxy, in shops, loot or in booster packs with ships) and spend certain amount of resources like ore (it used to be available during previous tests). It's not so difficult if you have a couple of faithful comrades and your own House. Ship project is a disposable thing. Low tech level ships can still be built by simply spending a small amount of IGC (in-game currency). Some ships are available through faction progression, for gaining ranks.

Quick matches are still available for Characters and reward you with IGC and experience. There will be modes like Survival and Extraction: you are probably already familiar with the first one, and the second we will describe in details later, in a separate article.

You still can get into Ranked Mode simply by pushing one button - find it in the menu at the top of your screen. By pushing it, you change all the information and menus into Ranked Mode. Push it again, to switch back to MMO mode.

The main feature of this mode is that you do not need to buy anything to participate in Ranked battles. All Ranked players get completely identical module and ship sets, not depending on their level, amount of IGC or any other factors: This allows them to compete only in the ability to manage the fleet and think through unexpected strategies and tactics without any significant restrictions. Ranked fleets are tied to the account and are not connected with the characters in any way. By winning ranked battles, you climb the ladder and get a special rating currency, which you can spend on visual ship customization.

However, to be able to participate in ranked battles, you will need to level up at least one character on your account to a certain (do not worry - not very high) level. This will allow you to properly prepare for the upcoming battles and give a worthy rebuff to your rivals. We also added an ability to create several variations of fleets for the ranked mode - and, unlike the MMO component, you can even choose different factions for them. 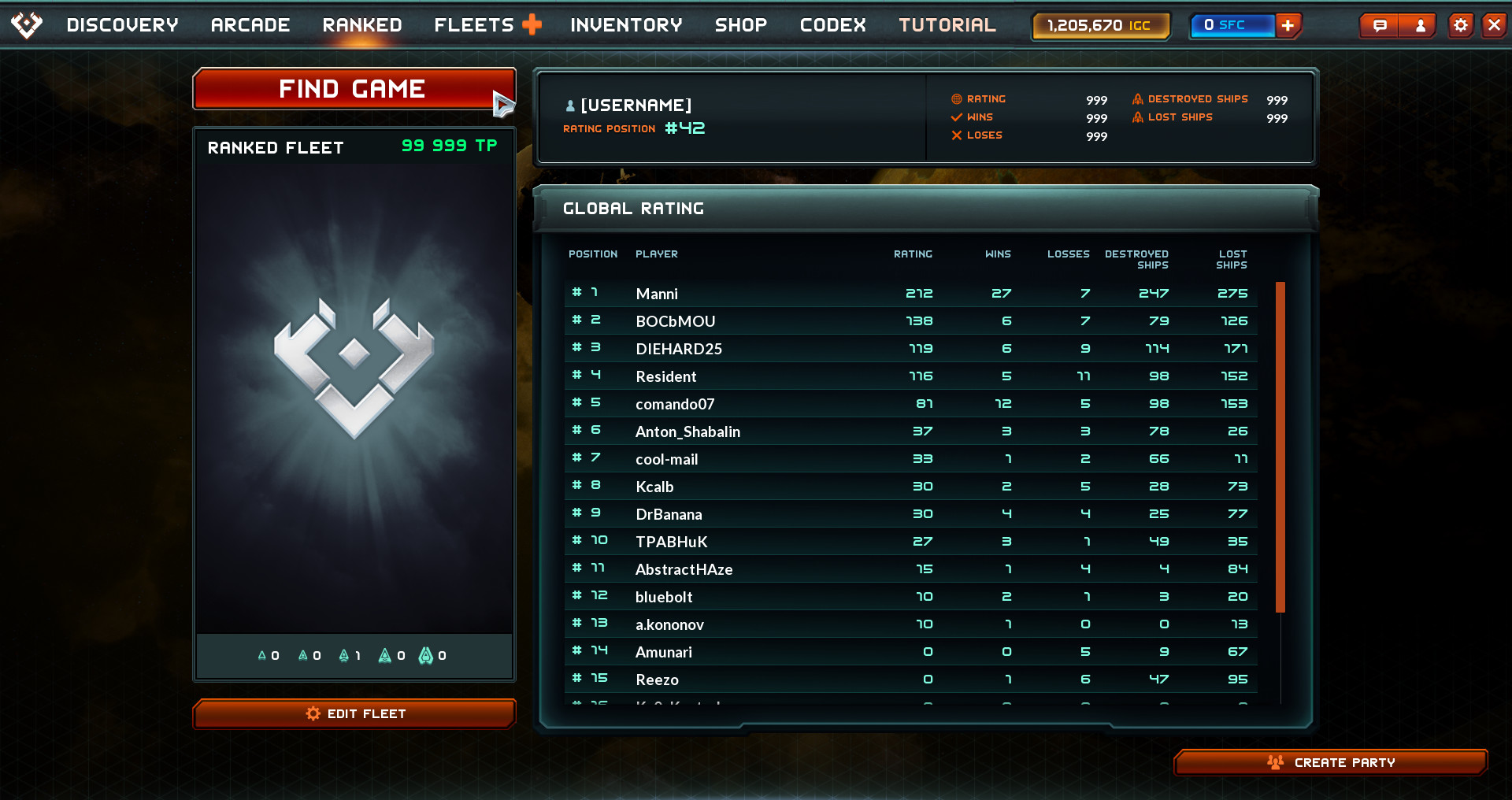 Ranked menu before announced changes. It was used for a test and tournament in January.

We have planned the following ranked modes:

Eventually we plan to rework the rating system itself - the algorithm for calculating rating points, the type of the rating table itself and other related nuances will completely change. Piece by piece, we are going to introduce seasonal system and special rewards for them.

Of course, we remember about tournaments - a littlle bit later we will start improving its' functionality, spectator mode and, if possible, will hold new interesting tournaments with live broadcasts, prizes and other attributes for this type of events (you are waiting for this, aren't you?) ;)

By dividing Ranked Mode and MMO, we withdrew from the limitations in character's and individual ship's progression. We really hope to provide players with a long and interesting path from a novice commander with several ships at his disposal to an experienced admiral, capable of leading into battle one of the many detachments with different tactical abilities he has.

Of course, the changes described here are far from all that we have planned. Here's what you can read about in future articles:

Stay tuned, be aware of all the upcoming changes and feel free to leave your comments at the forum - we are always happy to answer any questions you might have. ;)