This game was inspired by my two favorite types of games. Rogue-like adventure games, with perma-death, where you have to collect items in order to survive as long as you can, and top-down sci-fi spaceship combat.

I love rogue-like adventure games. Specifically games such as The Binding of Isaac, where you start with a simple character with relatively weak stats and have to collect items in order to make your character stronger so you can fight bigger enemies. I love thrill and satisfaction of looting enemies and building my arsenal of items. The most thrilling part of this type of game though, is that you can't re-spawn. This perma-death style makes it so that you can play a game almost infinitely; because death doesn't mean you start the game all over, It means you start the game over with a unique set of enemies and you find different items along the way. This means that even though you are starting fresh, randomly generated items and enemies will make every play-through unique.

I also love space games. Games where you are the pilot of your own ship and you fight aliens or anyone who is there to fight. I'm in love with the sci-fi universe where a person can get into their own spaceship and fly around the universe to do whatever they please; mining, bounty hunting, trading exploration, its almost edless. Well space is literally endless... I play any kind of space game there is: Anywhere from the classic Asteroids to the recent Elite: Dangerous.

With both of these always on my mind, I thought to myself: I wonder if there is a game that combines the two... the first game that comes to mind is FTL: Faster Than Light, with which I have countless hours of game-play on steam. To an extent, this game included both aspects that I enjoyed, but it was limiting. Turn-based combat being one thing I dis-liked. The game I yearned to play would have real-time combat. The game was also very much a strategy game, where I was looking for something more combat and arcade-y like The Binding of Isaac but with spaceships! 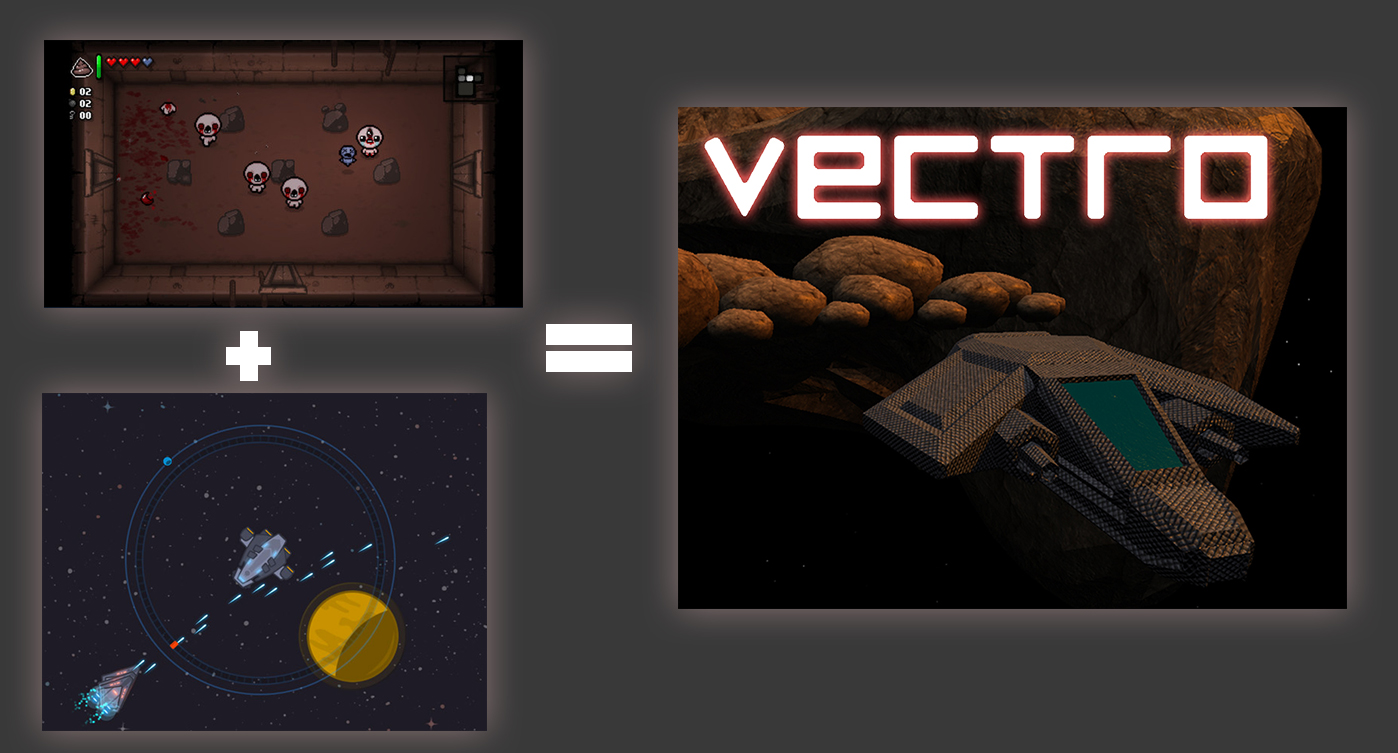 Unable to find the game I wanted, I thought why not make it myself?! Then I can make the perfect combination of my two favorite playstyles into the perfect game!

So this was the spark of Vectro.
In the past couple of days, I started my work developing this game. So far, I've managed to develop a system for controlling the ship, shooting lasers and missiles, crude enemy AI, and asteroids with some simple physics powered by Unity. I'm actually surprised how much progress I made in just a few days.

Here's what I currently want to implement into the game (in no particular order):
- An inventory / currency system
- Ship customization
- Ammunition system for player and enemies
- Enemy loot drops
- Procedural generated environment and enemies
- Ship upgrade system
- Shops for buying/selling loot and items
- MAYBE a building system, where you can get scrap metal from enemies to build items, but I want to stick with the Isaac style of looting.

I'll try and update every week with pictures and videos showing my progress.