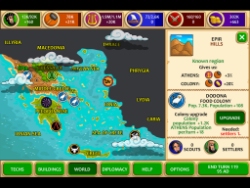 There are plenty of strategy games on mobile, but full blown civilization simulators seem to be in short supply.

It's a lot to ask to control all the bells and whistles required with a touchscreen interface. Although board game adaptations like History of the World have shown it's possible.

This is the historical vacuum that Marble Age is trying to fill. Or to be more specific, it's aiming at ancient Greece. You start with Athens as a village, and have to try and unify the warring city states while surviving invasions from Persia, Rome, and lesser-known local rivals.

It's more of a resource management game than a classic civilization affair. All the actions are turn-based and battles are abstracted down to a "fight or flee" option.

Most of the other pieces are in place, however, although sometimes in rather rudimentary form. There's a tech tree to explore, unlocking new occupations for your burgeoning population and buildings for your city.

There's even a map of sorts, which you gradually need to scout and sometimes settle with new colonies that send bonuses home to your original settlement.

The game makes an impressive and varied challenge out of a mere five resources and a smattering of sciences and buildings. It's quite tough enough on the normal setting, never mind the "hard" one.

As the years march on you're tested with various historical invasions. You'll need troops, and allies from the other Greek states, to beat them. Failure to do so drains your resources, lowers your score, and can lose you the game.

It is, in effect, a vast and very long puzzle. Aside from a few random events that can help you on your way, you need to figure out what to do, in what order, to make sure your city is in the right shape to meet the coming challenges.

In some respects, this makes the game rather predictable. But it's tough enough to make repeat plays essential on the way to working out the path to victory.

Its static nature can also feels somewhat repetitive. Yet it has that curious "once more" feel about it, that makes repeat taps of the end turn button compelling rather than cumbersome.

It helps that turns are super short, and there's always some threat or challenge round the corner. So you keep tapping, just to see if you can get past it.

There's an unexpected upside to forcing players to search for the correct strategic railroad to beat the game - a surprisingly rich sense of history.

While the mechanics have little in common with the real world task of running a city state, the historical challenges give an epic sense of scope and grandeur to proceedings

The graphics and interface are super-primitive for a premium title. For the most part, this doesn't detract from play.

Allocating your population to jobs, however, uses little sliders which are rather insensitive. Given the game's quick paced turns, having to keep readjusting a recalcitrant slider gets frustrating, fast.

Marble Age isn't the most imaginative or prettiest game around. And some players may find its straightjacketted approach to strategy frustrating.