Hello! We have prepared for you a new material, with a light, two-day delay, but we believe that you will forgive us ;). Was it worth the wait? You'll see in a moment.

Not without reason, when we were calling the new GMP we have been adding the adjective "new". Of course, we aren't changing the orginal name of our mod. Simply, in our eyes, the number of changes comparing to the available version is huge, therefore it makes it an huge evolution. There weren't many changes so visible to the player eye like now.

The biggest leap between the old and the new multiplayer are two integrated external libraries. Squirrel, scripting language and SQLite the engine of databases.

With Squirrel, administrators will be able to write their own scripts, game modes... if fact, anything that they would want. Syntax of squirrel is very similar to C/C++/Java, so anyone with experience in languages above should be able to feel like at home . It's also a dynamic scripting language, similar to Python/Lua... We are confident that we have chosen the best language we could.

In fact, most of the ideas on what an ambitious administrator can achieve are only limited by his imagination and the possibilities that we provided... And we want to give them a lot and constantly improve them, while listening to your suggestions.

Squirrel runs on both the server (server-side) and the client (client-side) - this means that scripts could also affect your game, not just the server. Therefore, we were able to use squirrel for creating scripts like map, chat or sprint.

See some of these great opportunities yourself:

These scripts have been written yesterday, just for this news. If you're curious how's it looking inside, we have something for you.

Written in apps like Notepad++ we save them as .nut and throw in client_scripts , server_scripts or server_scripts_autoload directory, depending on the type of script. More advanced gamemode should work on both, the client side and the server :).

That's how King Of Beef gamemode server-side script looks like: 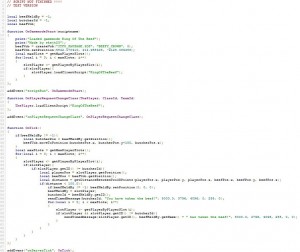 Second part in client-side scripts, nothing big though:

This mode and other scripts will most likely join the server, in addition, we will describe in our wiki (about which more soon). However, we share it today - just click here to download a pack of test scripts used in the video.

Time to move on to the other important news - SQLite.

Implemented in GMP SQLite library offers more improved performance comparing to MySQL. Not withougt a reason, this system is used both in iPhone and Android.

What is that giving to administrators and players? Along with the squirrel scripts, their own charactes, saved equipment, or generally any writing or reading data will become easy as can be. Such things could be implemented very quickly, using our new system.

Additionally, thanks to our account system, saving inventory or some statistics will be even easier. The game on the server will be also more enjoyable, since our progress is automatically loaded.

With Squirrel and SQLite, which is abbreviated as SS, the new GMP will be past all recognition.