Porting a PC game to Nintendo Switch, and how to redesign keyboard + mouse controls to actually work on a controller.

You might have heard the news: Tanzia is coming to the Nintendo Switch, in fact, it's premiering on it!

Some of you might we wondering, how do you port a game that was originally designed with Keyboard + Mouse controls to a console with a gamepad and (optional) touch screen controls?

Hey, don't leave! I was always going to share our whole process!

For those of you who haven't played it on Steam Early Access yet, combat in Tanzia using Keyboard + Mouse works the following way: you click on an enemy/monster and then click on a spell or quick select said spell with the number keys to attack it. So in a way it works like WoW –it allows for super-fast combat since you can chain your attacks (even offensive/defensive or stat enhancing spells).

Our first attempt at gamepad controls (for Steam) was super straightforward: you scroll over the hotbar using L & R to select a spell/potion, and then press Y to shoot/use it.

While that works, it is not a good translation of the fast-paced gaming style we have with keyb+mouse. Since you need to scroll to each item, it takes time to move from one spell to the other, so chaining spells takes way longer and is not as much fun.

Also when we implemented gamepad support, we added a target lock mode, so when you have an enemy/NPC/reagent selected and press it, the camera would lock and center on it so you can run circles around whatever it is you have selected and kite it easier.

We love that functionality so we're keeping it for future revisions.

We tried a couple variations based on this setup to make combat faster:

2) Having 3 or 4 of those mini cross hotbars, so you could scroll between them and activate whatever you have in there faster.

In a way, option 2 worked great, BUT moving your character with the left analog stick and then triggering your spells with the left digital pad made it so that you'd have to stop moving for a second to attack, and constant movement is super important in Tanzia: if you're in the middle of an enemy horde and stand still for a second, you're going to get hit, HARD.

Then we thought about moving the triggering of the spells/potions to the ABXY buttons, but not being able to jump with A was horrible, so the whole thing felt wrong...

We put all those ideas in the backburner until we were given the go-ahead from Nintendo to publish Tanzia on Switch, so now the controls need to be absolutely perfect! 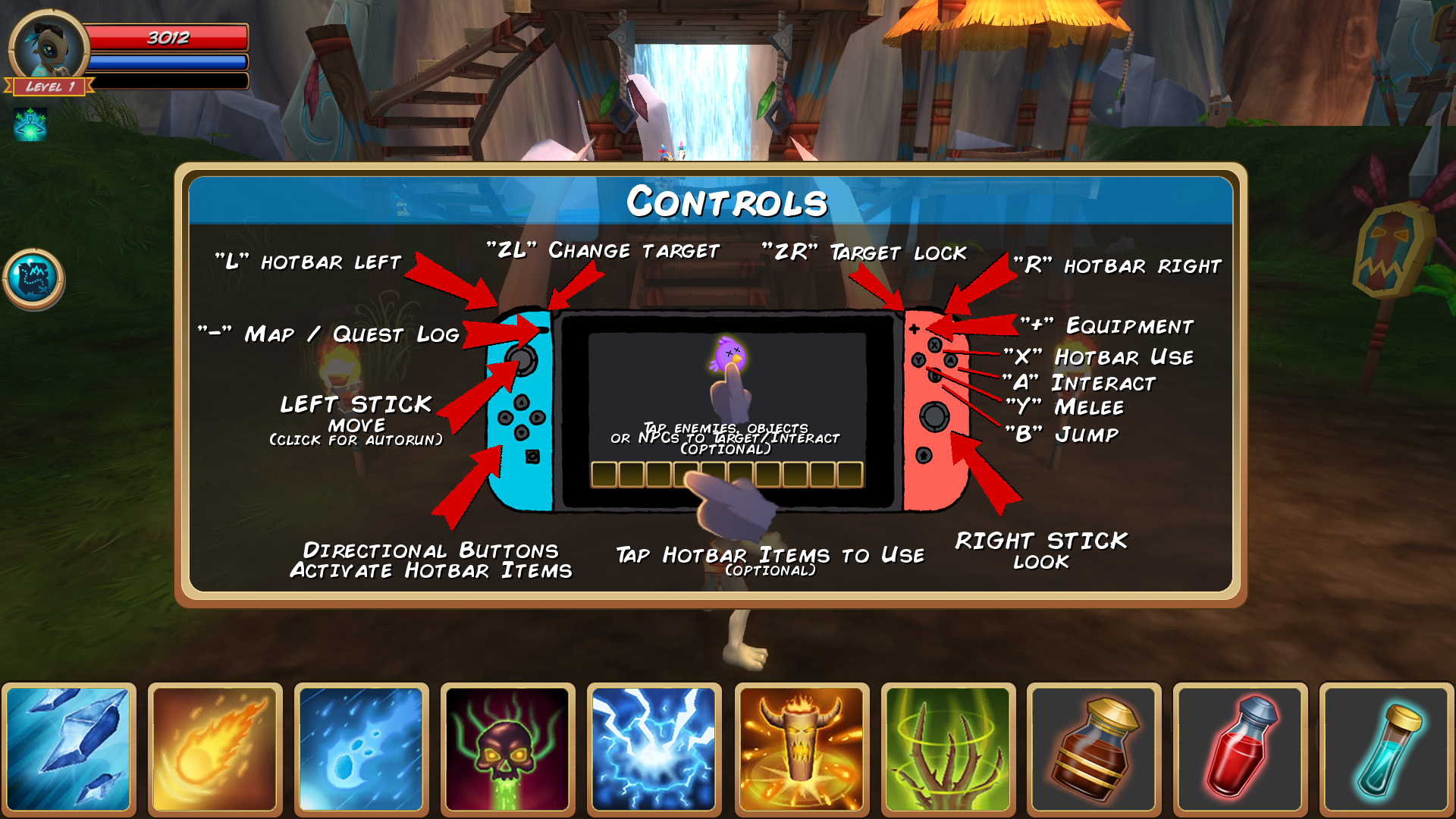 Playing in handheld mode, using gamepad + touchscreen feels absolutely perfect to us! You move with the left analog stick and simply touch the enemies/reagents/NPCs to select and then the hotbar spells to attack. It feels almost exactly like playing with keyboard + mouse. It's awesome and we love it!

But... (there's always a but) that cannot be the only way to play the game. We also need to think about people playing in docked mode on their TV's who won't have access to the touchscreen. So we need to add a gamepad only option! Back to the drawing board!

We're absolutely convinced of two things: we want the cross hotbar, and we want to control it from the right side of the gamepad, but we also don't want to lose all the ABXY real estate on it, and we want traditional jump/melee/interact buttons.

We saw a few games that use button modifiers, where you press one button to transform what others do while that one is pressed. So we thought we could adapt that and it would give us all we need.

So the idea is to have 2 cross hotbars, one that's controlled with L and one with R. While none of those buttons is pressed, on ABXY you find jump/melee/interact. If you press L or R and keep it pressed, those ABXY buttons turn into what's on the UP, DOWN, LEFT, RIGHT hotbar positions on either side.

So far, we're really happy with it. We need to thoroughly test it to know for sure it's the right control scheme for Tanzia. But it seems it could be the winner.

Have any comments or critiques? Let us know in the comments below.