This week has been spent working on a new tileset for the desert level of the game.

Most of the stuff I’ve been working on in the past week has been control improvements and designing some levels for playtesting. I’ve also been working on how hazards and enemies will work in the game, all stuff that will hopefully pay off in the near future

The level tiles for the desert were badly in need of being redesigned, so I finally got started on that. These will be more close to the final set used in the game, and still needs a bit more variety added to it, but the process was interesting, and definitely helped inform how the rest of the tiles in the game will be handled. How to design a tileset could be a fun topic to delve into some point in the future so maybe we’ll come back to it. But anyway, below is a screenshot with the new tileset and I’ll see you all either here next week or streaming development live on twitch.tv/gamesplusjames! 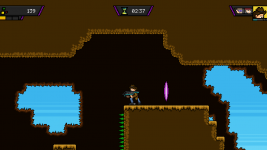