The third (and incredibly late) devblog entry for the PORTALHOT mod for Portal 2. Now with 100% more weapons and 200% more enemies!

The third (and incredibly late!) development diary for the PORTALHOT mod.

Finally! For the past two weeks I’ve been silent about the mod, as a big number of school-related problems had prevented me from making a whole lot of progress. Hence, I have decided to wait with a blog post until I have something significant to show - and I am pleased to say that this time had finally come! But before we talk about the good stuff, I also have some news that I’m a little more bitter about.

I have mentioned problems with school, and this is the main factor had forced me to reconsider some of the assumptions about my time resources that I had when I started this mod. I wrote in the summary that there are going to be eight levels to my mod, but unfortunately I had come to the conclusion that if I want to deliver a satisfying and relatively polished mod within the time constraints of the competition, I need to downscale that number somewhat. There are going to be six levels in PORTALHOT now. I dropped the bossfight (I didn’t really have a very good idea for it anyway, to be honest), and merged two other level ideas into one (they will probably profit from this anyway). While this doesn’t sound like much, keep in mind that depending on how well the things are going to go, I might downscale the mod further. I hope not since this would mean that I would have to drop some really cool ideas that I have for the levels entirely, but I am writing this down to warn you in advance in case this happens.

So, once we have that over with, lets look at what I have worked on in those past two weeks! The theme of this update is “enemies”, and I am going to talk about them. But before I get to that, I want to show something that relates to this topic, but not directly. I am obviously talking about the healthbar!

While neither Portal 2 nor SUPERHOT actually have a healthbar, I have decided to implement it for a number of reasons. Since the one-hit-kill mechanics of SUPERHOT would probably work very poorly with the hitscan turrets (can’t avoid bullets in midair), I am leaving their damage values at around normal Portal levels. This means that player must be shot at for a while before he dies, and hence he must have some way of keeping track of how much health he has. In Portal games this is done by tinting the screen red (more red=more damage), but in my mod the screen is tinted red when player enters the slow-mo, so this would be completely illegible! Hence, a need for a clear, visible, on screen healthbar arises.

I wont bore you with how I implemented the healthbar since it’s a pretty simple Vscript job, pretty much the only complication I encountered was that it had to be disabled when the intermissions are played since the game doesn’t like when there are two text messages displayed on screen at the same time. 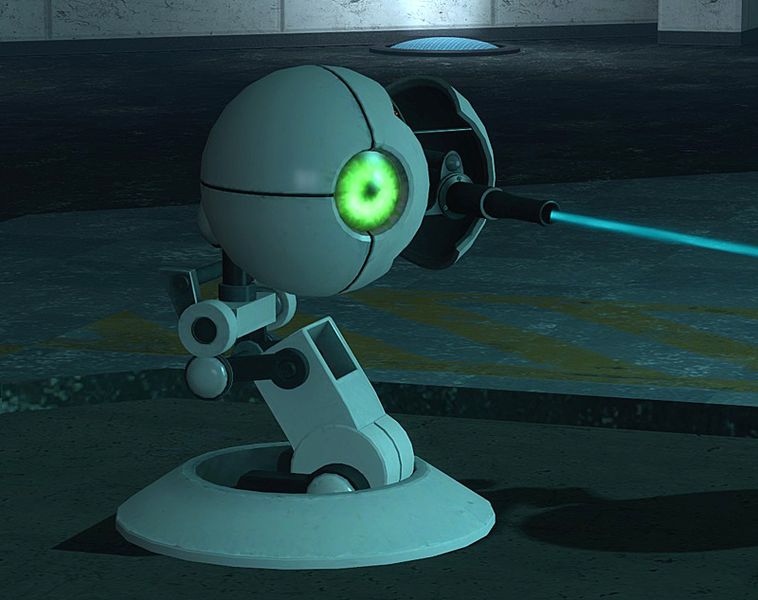 If you’ve played Portal 1, you more likely then not remember those! They were absent from Portal 2 for some reason, but I’ve brought them back for this mod. More specifically, a nice fellow named Skotty did, and allowed me to use his fixes and instances in my mod. I’ve modified them a little to suit me better, but the main credit still goes to him. Kudos to you, Scotty! 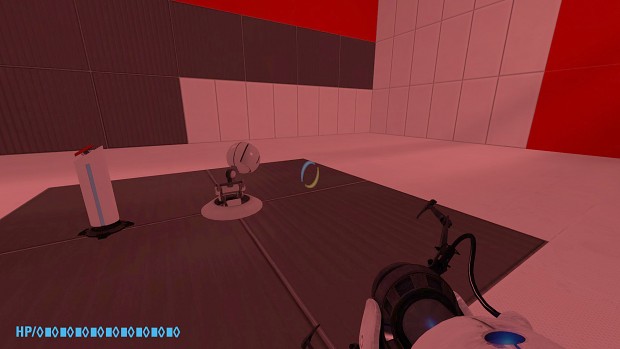 Generally, the main advantage of a Rocket Turret is that it fires a rocket projectile that, unlike normal turrets’ bullets, can be avoided in slow mo. Like in Portal the rockets can be redirected using portals and use to, for instance, destroy glass or topple turrets. This, however, is not all there is to this enemy in my mod... But I’ll leave it for the last paragraph for now. Until then, lets look at the third enemy type that will appear in my mod! 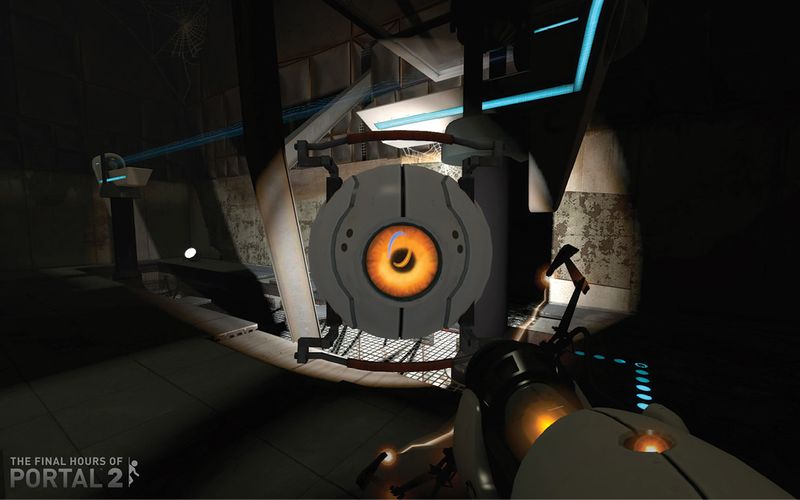 That’s right! If you’ve never heard about the hover turrets before, they are essentially an enemy that was originally going to appear in Portal 2, but were scrapped during development. However, they are still present in the game’s code, and with a right model fix can still be used in maps. One such fix was made by PluMGMK (you may know him from his Portal 2 mod Aperture Ireland), who was kind enough to allow me to use it in my mod. As far as I know no other Portal 2 mod ever used this enemy (admittedly, it doesn’t really work as well in normal puzzle gameplay as it does in a combat-oriented mod like PORTALHOT, hence it was scrapped), so prepare yourself for a treat! 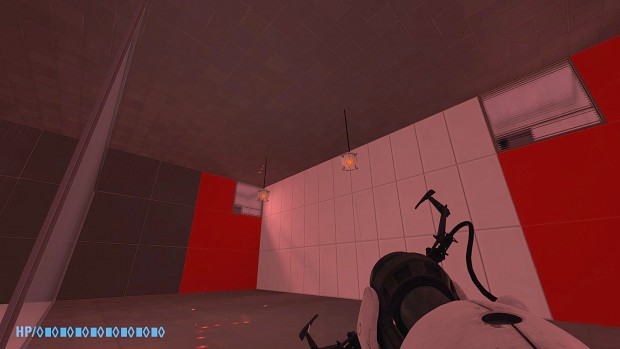 While PluMGMK might have made a model for the enemy, the lines of dialogue this enemy was supposed to have has unfortunately been lost to history. In order not to scare the players with eerie silence, I have recorded some voicelines myself! I am no voice actor and this is the first time I am recording my voice for a video game, so if it sounds like a fat neckbeard speaking to a cheetos-covered mic headset then I’m sorry for the experience. I’ll put some robot voice filter on it in the final version anyway.

But wait, there’s more? Yes there is! Remember me mentioning a surprise in my previous devblogs? Well, I am pleased to announce that the surprise had come! And I hope you are going to like it...

When I was thinking about what sorts of mechanics or gameplay additions could add to the mod experience and potentially make it feel more like SUPERHOT, I started to think what really defines the experience of playing that game. People often compare SUPERHOT to Matrix, in the sense that you’re able to pull all these superhuman stunts and do things you would not be able to do normally. When I was working on the rocket turret, an idea hit me.

What if you could rip the turret and carry it with you as a weapon? 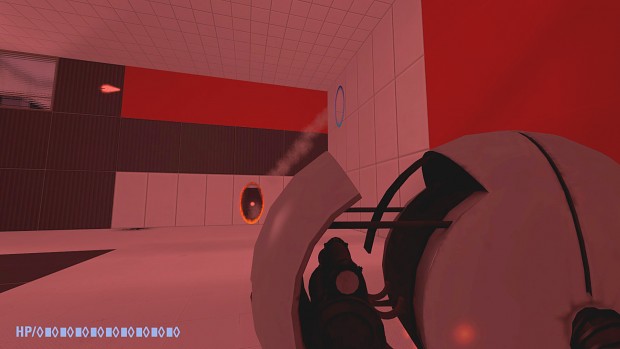 Yep! PORTALHOT has a second weapon now, after the portal gun: the rocket launcher! I have not yet decided whether I want the weapon to have an ammo count or not (the ammo counter could be a problem, as I mention earlier game doesn’t like to have more then one text message displayed on screen), and the weapon works a little differently then the weapons in SUPERHOT. While in that game you could only have one weapon at a time and in order to switch you would throw the old one out, here the portal gun is far too important of a tool gameplay-wise to let the player loose it in an acid pool or something. Instead, once you rip a turret out you can switch between the two guns anytime by pressing “G” (key is rebindable in options menu). Like firing portals, shooting rockets makes the time resume for a very short while.

That is about it for this blog post. For the next two weeks I am going to focus on pushing out the levels mainly. I’ll try to post some screenshots occasionally, but this is most likely the last blog post update until the mod is out. Stay tuned!