Hello everyone! Today we talk about some sideline things. About MolyJam 2031 and about a possible crowfunding idea. Click to read more!

This one will be a short news day for Poltergeist.

Is not that we have not been working on it. It just we don't have something truly special (and functional) to show you. You should actually expect news from us regarding "enemies" soon! Like Ghost hunters and stuff n_n.

We wanted to talk about a few things though, First is that we decided to make the ludicrous insanity of participating in a game jam. The MolyJam was the closest option for us, so the past weekend we were in "game jam mode". If you have been, or watch a video game marathon, like Global Game Jam or Ludum Dare, you know they are insane amount of work in a short period of time.

So we participated on MolyJam on our own. We live in Colombia, so there were no locations near us to go U_U.. That doesn't mean we put it out all our effort to finish our game! It's called "Time Travel Knight!" and you can check it out here n_n. 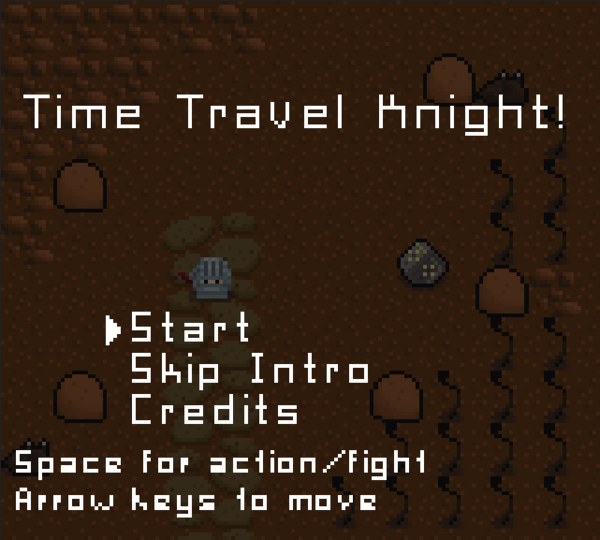 The other thing we want to talk about is crowd funding. Ye we are thinking of having one for Poltergeist. Let make one thing clear before: We are finishing this game, crow funding or not. We simply cannot just let this go, and we will work hard for it.

But the thing is making a game is a complex task, and just the two of us, although possible, might take more time than we expected. We would love for example to outsource some of the pixel art, so Diana doesn't have that much amount of work and can focus on other parts of the game. And well, we do need an audio/music guy/gal, but also the money to be able to pay that audio/music guy/gal ^_^.

So, this is something we've been thinking for some time. Making a crowd funding campaign can be a very daunting task, and might demoralize us if we don't make the proposed money. However, If we decide to do it, maybe you'll hear from us soon about it n_n.

Ok, but you wanted to see some Poltergeist right? That's the whole idea of this news thingy. Oh well, here's a simple treat n_n. The Ghost Hunter is almost complete. Here's a video of him wandering with other characters.

You can see the guy is totally unfinished! There are no run or idle animations, and he still doesn't block your powers... yet! Don't worry; we'll have him finished in no time n_n.

And welp, that's it! You can also notice that there is some incomplete "information tab" on the lower right corner. We'll also talk about that soon!

See you all later, stay tuned!