Inner workings of sprite sorcery on the newest in-game boss, as well as a barbaric podcast!

Last week was a bit brutal - I got smacked square in the face with a flu bug that took me out of commission for a good seven days or so. I'm pretty sure somewhere within that time frame I smacked it back in its stupid face since it isn't here anymore. So, um... victory!!(?)

But, on a super positive note, last week I also got to hang out with the magnificently talented bunch at The Milkshake Boom and talk about three of my favorite things: barbarians, video games and movies (maybe probably in no particular order)! 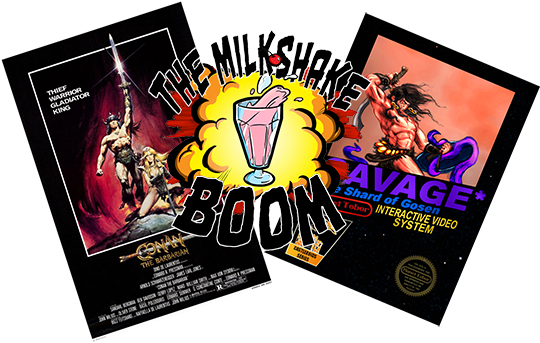 In particular, we chat about Savage and the 1982 film, Conan: The Barbarian. You can check out the discussion here: Themilkshakeboom.comI just finished ALL the game art for one of the most complex bosses in the game, In'D'Ok - King of the Frost Giants, so I figured it might be a fun thing (maybe?) to share some of the mega-magical-behind-the-scenes-type stuff with you!

HERE'S THE ORIGINAL SPRITE ALONGSIDE HIS LIKENESS, THE TWITCH STREAMER KNOWN AS INDIE...

... AND HERE'S THE CLEANED UP VERSION. HERE IS ALSO WHERE I START TO SEPARATE THE SPRITE INTO PIECES AND GIVE THEM THEIR OWN LAYERS (HEAD, TORSO, LEFT LEG, RIGHT LEG, ETC.)...

NOT HAPPY WITH THE INITIAL COLOR SCHEME, I MAKE A PASS ON COLOR CORRECTING THE HAIR, AND CHANGE THE WRAPS AND FUR LINING OF THE CLOTHING. I ALSO ADD ADDITIONAL PIECES OF ARMOR AND CLOTHING, KEEPING EACH PIECE SEPARATE ON ITS OWN LAYER. YOU CAN ALSO SEE OUR NAKED LITTLE HERO FOR SIZE REFERENCE.

HAVING ALL THE PIECES OF THE "IDLE" SPRITE SEPARATED, I START HIS PRIMARY ATTACK ANIMATION WITH SOME CONSTRUCTION LINES.

EDITING AND WARPING THE PIECES TO FIT THE CONSTRUCTION LINES, I START TO FILL OUT THE IMAGE, ANIMATING THINGS LIKE THE TORSO AND EACH LEG INDIVIDUALLY (INCLUDING THE SUPER SEXY LOINCLOTH).

I KEEP ANIMATING ALL OF THE INDIVIDUAL PIECES AND LAYERS SEPERATELY, AND WE WIND UP WITH THE NON-ARMORED VERSION OF HIS ATTACK ANIMATION.

FINALLY, I DO AN ALTERNATE HEAD SPRITE FOR WHEN HE'S WEARING HIS HELMET AND FINISH ANIMATING THE OTHER ARMOR BITS! ALL DONE!

And that is (the short version, anyway) more or less how I go about constructing and animating an enemy sprite. This particular character is super complicated because of his size and moving details like his armor bits and such.

Time to export his sprites and drop them into the game!

The rest of the game is coming along great and I am in full boss mode - only a few more remain after this one is completed!

Thanks for reading!
- Matt