You could be forgiven for having not heard or seen this map. You may not have played it, if you've only been playing the demo or don't play online much you may have ignored it. But still, after showing you SotM3 last time around I have to show you this series. 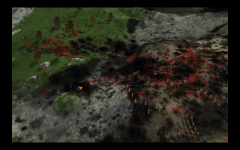 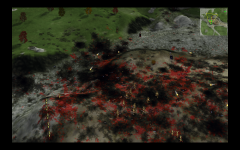 To explain a little about the back story behind this, when Myth II came out, some of the project magma boys ported the multiplayer maps to Myth TFL. Why not? Have the best of both worlds, like wise TFL maps were ported for Soulblighter multiplayer. New meshes were added to each map with different unit sets, and in particular there was a single player/co-op based around the ambush of Mazzarin by The Watcher. When you bare in mind that this is a large multiplayer map in essence you can see where things went when they said "It pits you against the largest hoard of enemies ever seen in ANY Myth map."

Like anything good the basic version couldn't be left alone. MD 2 boasted "almost 100 improvements, tweaks and surprises" and on top of that there were a few hundred new enemies to kill off and your units were modified to be slightly more powerful. It's a slippery slope when you start hacking units and have hundreds of enemies. In fact, as someone who enjoys Rocket Dorf Arena and Dorf Riot along with fiddling around with his own plugins can say it's addictive.

So time came and went Take 2 Interactive got hold of the Myth Series and then abandoned it. Project Magma and MythDevs came along, carried on doing bug fixes and improvements and eventually came up with Myth 2 v1.4. Thing is, when you do something along the lines of upgrading a game and enhancing it you need a show piece. And I did say it was a slippery slope...

Notes: Not all plugins and such are compatible with each other. For the best, most probably easy running make sure that only one Mazzarin's Demise plugin is loaded. This level is based and ported from one made by Bungie for Myth: II Soulblighter, modified and ported to Myth: TFL by ChrisP and others of Project Magma before porting it back to Myth II. The read mes in the zip files will tell you more.