OK, so it's not a 'proper' plugin. It's not a brand new campaign or tagset. Does that matter? No, no it doesn't. When you consider how high quality some games are these days you'll wonder why they need such large teams...

We see it with mod teams all the time, high quality addons that match or surpass the original game. Counter Strike & Day of Defeat for Half Life, Project Reality for Battlefield 2, XMP for Unreal 2, Median for Diablo 2. Those are just ones I can remember off hand, there are probably loads more that anyone could point out. Some have gone on to become major franchises and others haven't. 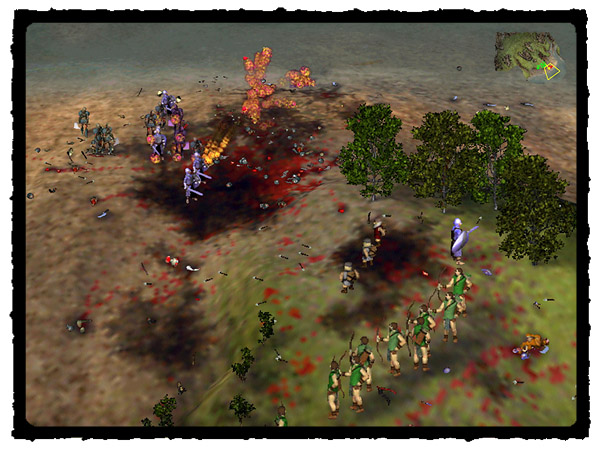 Back in the day there were a group of people working under the banner of Creation. For future benefit I'll cover another couple of their releases at a later date, they had some extremely high quality after all. One thing marked them out from a lot of other groups, they were unusually intelligent in both their design and utilisation of their existing resources. This was often reflected in their maps, in the Coming of Dark series you were regularly lured and trapped, ambushed and decoyed out. In many respects though you were often out played before you'd loaded the map. Scripting was of such a high quality that you could play through the first time, miss a load of triggers and muck up, go back to a save, take the same route and hit each and every trigger coming leading to a torrent of enemies overwhelming you. The CoD map 'Banks of the Ire' is a testament to this. The 'Source of the 500 Poisons' hints say 'If something looks suspicious, it is.'

So, were there 50 people working on this project? No. Were the creators all industry professionals with spare time projects? No. Were they all studying computer games at university? No. Were they all teenagers with too much spare time on their hands? ...I'll get back to you on that, but it is most likely no. If we use Black Mesa by comparison it took 7 years for a larger fluctuating team, doing to engine ports and create new content to get the game built and running. Surface Tension uncut and On A Rail uncut, to date, have probably taken 5 months so far. The reason for this is simple. Although CoD, STu and OARu are 'big projects' they have all the resources necessary at their disposal. Have you played Minerva? It's a similar story with similar quality. Sure, CoD had 'new' units in the Fir Bolg Archers, though they were ported in from Myth TFL. So were some of the enemies for that matter, the maps were custom designed and built to purpose. The point is that everything needed to make the basic map itself is already in the game. Scripting and balancing probably took a very long while, Mymidons were probably preceded by Myrkridia for playtesting purposes. FirBolg would be preceded by Archers. The point is that the series of maps is an example of excellent planning, testing and overall excecution. You never got the same game twice as there were enough variables, units patrolling and general random events, either due to scripting or game physics that you couldn't recreate anything. Instant replayability? Yes. Addictive? Yes. Frustrating and hard? Only when you tried doing stupid things like troop dumping.

So what do you get by downloading this? You get several beautiful artistic maps, you get what could be called a "Pro" challenge as these levels are by no means easy. You get one of the most satisfying gaming experiences ever.

1. Not all plugins and such are compatible with each other. For the best, most probably easy running make sure that the maps are the only plugins loaded. 500 poisons has issues if The Fallen Levels is already running as a plugin.

2. Not all the CoD maps were released afaik. Whispers of the Wind age is not included in the download for example. If anyone can get in contact with Clem, Ares and the others and know if any of these unreleased maps still exist in any form please let us know. I can think of no better celebration of the Myth series than seeing these released.