While our recent focus has been on Shattered Paradise and released a playtest for it yesterday, we decided to release an update for Romanov’s Vengeance too, so here is the playtest-20210716.

It is not as big of an update as the last one, there are a few balance changes and random cosmetic updates, like ship sinking sounds and infantry corpses. A random thing i added, which to be honest i wanted from the early development, is the Dune 2000 tileset. There are currently 3 maps available on this tileset. 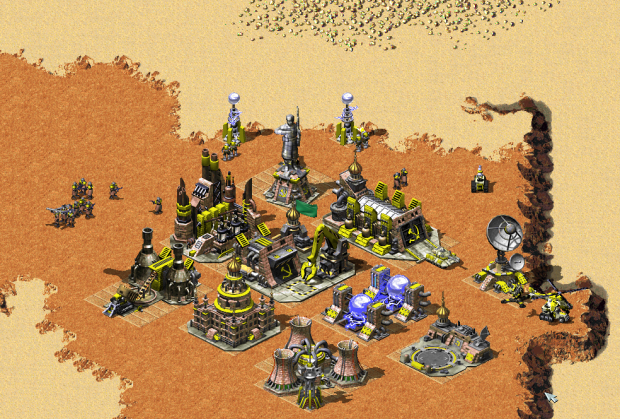 I’ve also did some cleanups on the existing tilesets, there were a lot of trash there that wasn’t used. This seemed to help a good chunk with the load times, which has been a big issue with the mod.

Another rather big change we did was to allow base defences to be placed on water. The shipyards provide a small area around them for this.

Allied and Soviet defences on water.

Also another gamemode has been added in this version, Unholy Alliance. As you may know it from the original game, it makes you start with both factions’ Mobile Construction Vehicle.

You can find the full changelog here and download the new version from here. If you have any questions, you can find us on our discord channel.