In today's devlog I talk about how I created a more challenging player AI by making it aware of it's surroundings. 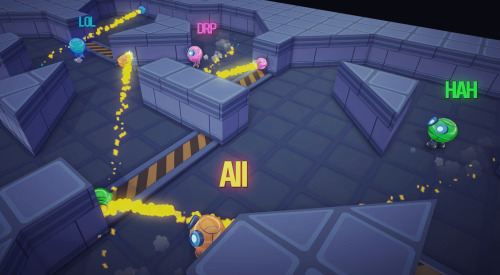 Today was a pretty productive day, I did several small tasks and one big task.

Now for the big change, the Hard AI. For the Hard AI I wanted it to use raycasts to figure out if it had a good shot accounting for bounces. I started writing this code back in the end of february, as I thought of making this little challenge mode game for rocket fist and for level design purposes I made a laser pointer that showed me the bounces the weapon would do. 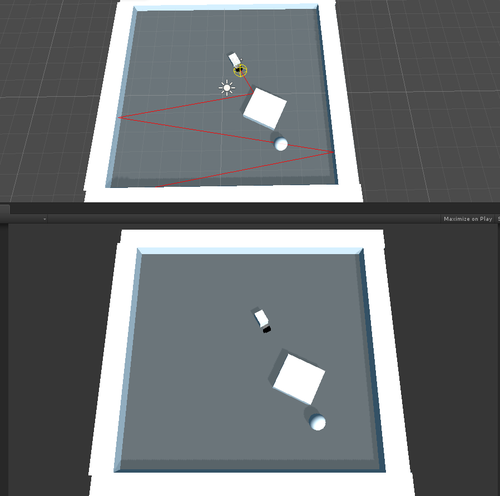 That way I woul easily be able to see if the level was solvable as I created levels, and would be able to move things around to make sure the bounces would make for possible levels.

So, I got that piece of code back and implemented it into my player. I thought of having a temporary laser aim powerup whenever I get around implementing the power up system, so I seized the opportunity and made myself a little laser aim using LineRenderers.

Doing that for the current weapon position is pretty easy, but to check for possible bounces I should check all around the player. I could just raycast to different directions from the center of the player, but that’s not where the weapons are shot from… So I had a problem: I would have to find where my weapon would be for my player’s rotations. 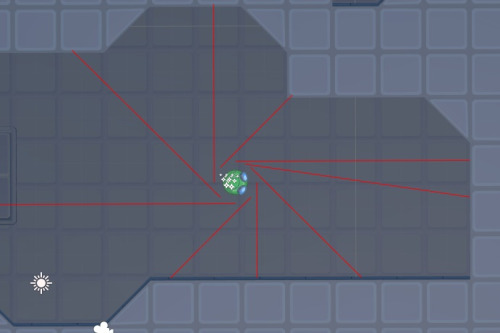 My solution is probably not the most elegant, but it works, I created a new empty game object and made it follow the center of my player. Every frame when I’m doing my raycasts, I run a for loop in which I:

That gives me rays all around my player from the position the weapon would be, and since the empty game object is following the player but is not a child of it, it won’t keep rotating and changing directions, the direction I get from there I can use to rotate my players towards. 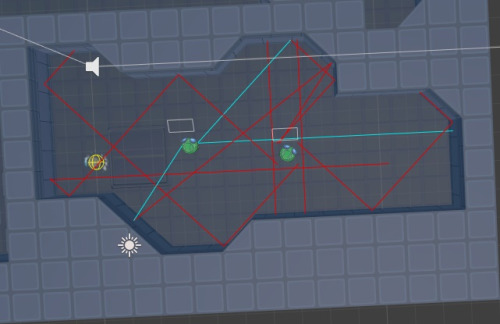 Here is another picture of it, this time with bounces turned on. I made it so whenever a ray found a player it colored the line blue, so it would be easier to know if it was working.

I made a copy of the Herp AI (Medium Difficulty) and messed around with the section in which it tryes to shoot at the player. Now it will keep checking on it’s web of raycasts if it has any possible shot to the player accounting for bounces all around. If it does, it will tilt the analog stick in that direction. Whenever the main raycast (that one changes with the player and is always pointing forward) finds a player, it will have a 55% of chance per frame of pressing A, otherwise it’s 10% chance if it’s in the same vincinity of the player and looking vaguely in the player’s direction.

This has made the AI extremely evil, it gets me with crazy shots I wasn’t expecting. To make things worse I added a new method for finding weapons, so if this AI doesnt’have a weapon but the closest player does, it will look for a farthest weapon from the closest player, so it doesn’t get baited to a weapon that I’m guarding instead of going for another unguarded one.

I played 1vs1 against it 3 full matches and I still haven’t managed to beat it in a full match (I kill it sometimes of course, but it’s winning the full matches against me ><). In my defense, it’s late and I’m tired!

You can see the evil AI destroying me in the GIF above (I’m naming it Troll… now I have Derp, Herp and Troll).