Holtman, Valve's director of business development and legal affairs (and also seems to be the gatekeeper behind mod approval for Steamworks) discusses how Steam has broadened the company's horizons. Even though recent NPD reports have shown that PC retail sales are slumping while consoles climb ever higher, Holtman argued that online sales were not cannibalization. Valve also tracks retail sales of its products through Steam and therefore has figures to support this. During a Day of Defeat free trial weekend, Holtman stated that there were "28% more units bought at retail than sold through Steam."

Valve's take on lessening piracy was also a pragmatic one. "We take all of our games day-and-date to Russia," Holtman reported. "Russians are reading magazines and watching television -- they say 'Man, I want to play that game so bad,' but the publishers respond 'you can play that game in six months...maybe.' "

Read the original article on GameDaily 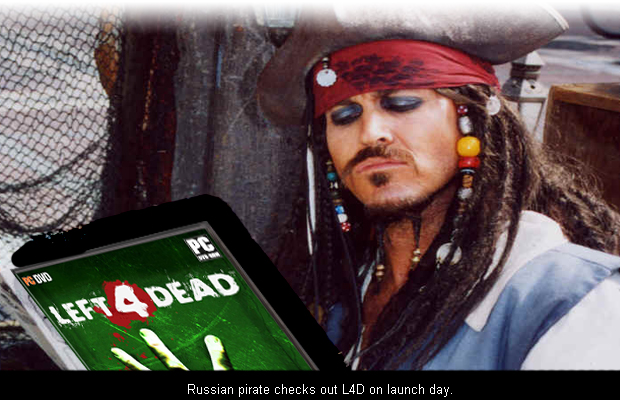 Once again, a member of Valve Software speaks the truth.

wow you know what its not fair if these russians and other people don't get a game the same time as us the developers don't cards because they don't make enough money it kinda gets you thinking about piracy its wrong but wow this really makes you think.

leave it to valve: the common gamer says "don't treat people like crap & piracy will drop!". Common gamer is considered stupid & naive. Valve says it & it's the second coming!

To bad in Valve's truth they forget to say an IMPORTANT thing: they don't WANT people to know the steam sales. They make contracts with some dev's the bar them from talking about digital sales, they don't give any numbers besides really rough estimates (ie "1/4 of all sales", etc).

They could easily say that steam sells X copies of one of their games, but they don't. They didn't here, even though they say that if people knew the numbers they would know retail trumps digital sales!

VALVE IS MY HERO

I LOVE VALVE, and it's not like they aren't doing well. A quick search brings up Gamasutra.com , which says The Orange Box sold around 3 million copies so far. Also, the article is from Dec. 3, so it seems they DO give out sales figures.

Very interesting read. Definitely like to see more of these.

Good read, I had a russian mate and it seems that he was one of the biggest pirates I had ever seen, although he bought games after he tried them which was pretty considerate I think.

What does he mean by giving away a character class? The achievement unlocks?

Well if the mods didn't delete my thread you would know he ment that they should be selling their custom content, like where you need to PAY to unlock the other classes. Absurd? Yeah, we all know that.

However we all know this is PC gaming, and that in itself is for another argument.

You should chillax, they meant releasing new content (new classes new unlocks etc), which would make much more sense in this context.

i dont love valve especialy for their policy euro=dolar making lots of games for europeans customers prety more expensive (even up to 40%) some companies like THQ already took actions lowering prizes over steam shop for europeans making games REALY cost same as in retail shop in country currency but its still a luxury i love steam...but not valve policies they are giant...and they make all rules on their steam but not all their rules can be right.

You do realise us Europeans pay more on every game anyway?

Its not just Valve, almost every publisher makes us fork out more, for games, software, hardware, consoles.

Its absurd, but Valve is simple a small cog in the massive machine of Americanised business models.

I thought that digital delivery was supposed to lower prices as there's no physical medium involved any more.

That's my main gripe with steam really. Needs to lower prices to compete with retail outlets.

But i mean games in stores even from US are alot of cheaper then on valve DL machine ... euro stands like 20-30% more then dolar is valve thinks dollar=euro

it should be alot cheaper since: game dont needs to be transported burned on cd and delivered to store but only so far THQ care about customers lowering their prizes but i herd other companies do same since prizes over steam are 15% expensive them in most expensive retails shops around since currency exchange if you dont even know what i talk about dont even coment euro DO NOT equal dollar

Thats a problem with the original publishers/developers than Valve. Valve loves giving the best possible price for there products.

When I told my opinion about the same thing (people are forced to download games illegally, because they don't want to wait for weeks or even months, before the games are released in their region), i were BANNED from steam forum (killer89, slayer89).

valve can state this, but no one else.

Valve can suck my balls.