Assault Rifle 003 in Unity and the second hidden Easter Egg available inside our special Xmas level (which we'll make publicly available later this week) .. We really can't wait to make this baby playable with all its exciting extensions! 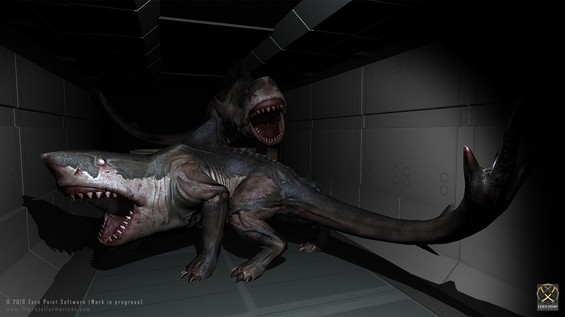 When we created our special Spearhead and Frontliner Christmas present in Unity 3.1 .. we only had time to implement a few small Easter Eggs. One of the Easter Eggs is a black corridor with two Shark Creatures and with a bit more time we would have created a nice little shock effect to ruin your sleep! .. With Christmas coming every year, no doubt we'll get a second chance! :) 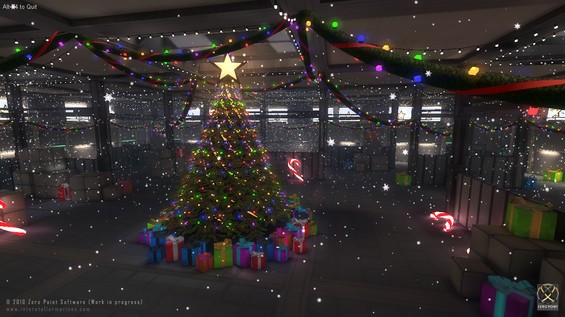 Merry Interstellar Christmas from Zero Point Software. Screenshot from our special Xmas present level build on Unity; a fun playground for getting up to speed with the many new wonderful features of Unity 3. 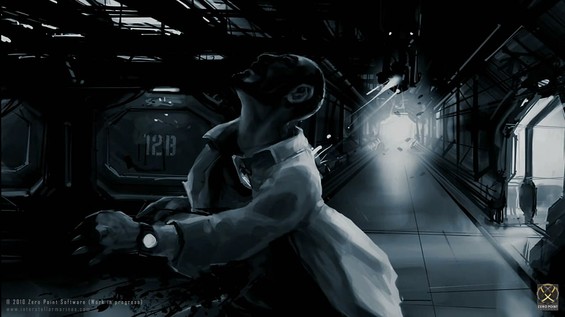 SARA has been neurologically designed to protect humanity against all threats of the unknown even if it means killing a few innocent people in the process. 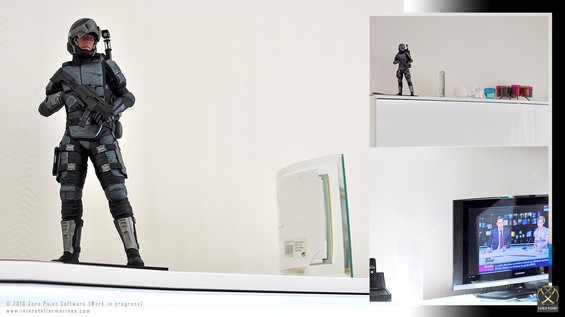 We recently found a few images sent to us by Stol2K; the lucky winner of our legendary Interstellar Marine model .. which we gave away back when we launched the community site last year. We miss you so much and really hope to some day be "able" to create a whole family of detailed miniature models of all the primary characters in IM. 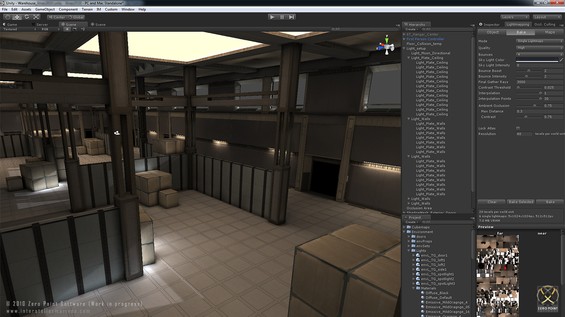 Early dump of our first attempts at giving the lightmapper in Unity 3.1 a run for its money. The lighting setup consists of 1 directional light with all secondary illumination achieved with emissive materials. The bake took approx. 3 hours (i7 Q720 1.6GHz) based on the bake-settings shown to the right. 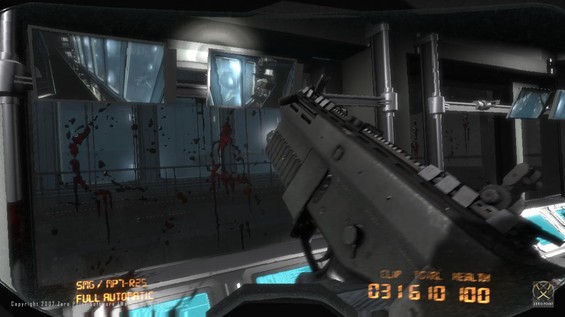 The players have managed to clear their way down to a barricaded control room overlooking the giant Carcharodon Carcharias water-tanks. Biological research is still under complete AI lock-down and it'll take a manual systems override to gain access to the flooded basements of Operations and further down to the stations mainframe. 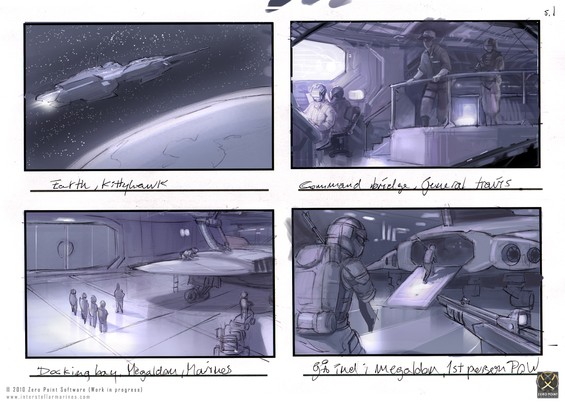 A few slides from an early storyboard we've created to visualize the moments envisioned for our ambitious coop campaign called IM: Prologue, which allows players to experience the back story leading up to "IM: First Contact"; the first full game in the Interstellar Marines trilogy. Prologue is unfortunately still tucked away in a drawer because its too expensive to realize at the moment!

Near final concept iteration of the Meikyu 2.1 "Rhino" Tactical Shotgun, shown here with Effective Range Scope and without buttstock. "I like to keep this handy... for close encounters!" 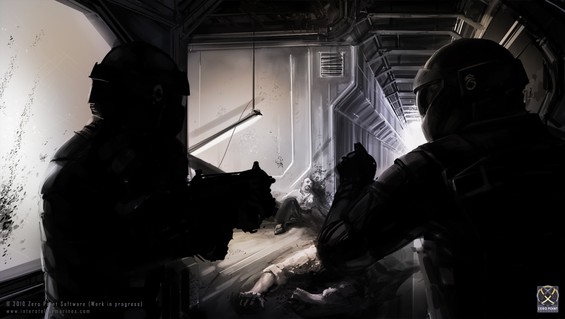 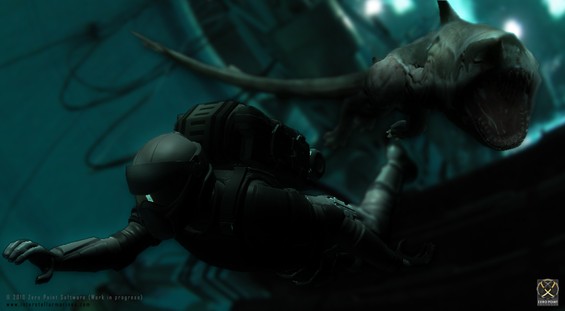 The Carcharodon Polemos is mankind's most deadly killing machine on land, but if you ever encounter one underwater, You'll need to be somewhere else!

ITO Strategic Command have close to unlimited funds when it comes to constructing the most advanced high tech training facilities for the candidates of "Project IM"!

The pistol 01 concept is a very precise and reliable sidearm! 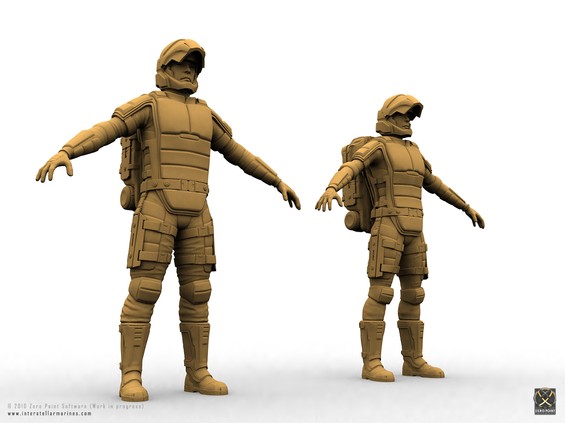 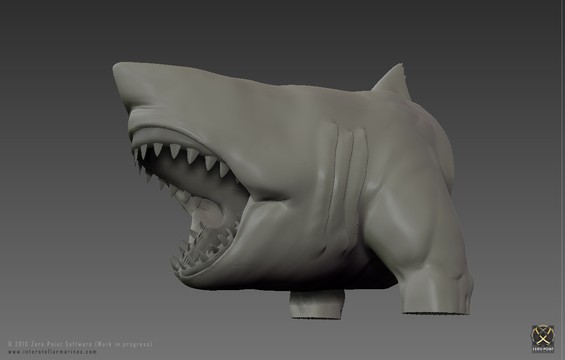 First Picture of the Week is a high-res modeling render of our beloved Carcharodon Polemos (Shark Creature) from when Bokaja modeled the latest iteration of this genetic experiment!

Woah, your concepts and models are beautiful! Great work guys!

That screenshot with the Carcharodon chasing the marine underwater is extremely cool and extremely creepy.
Takes me back to one of my old time favourite water creature movies called "Creature" by Peter Benchley.
I am not one to care if someone takes inspiration from great movie monsters and whacks them into a game, in fact, I would like to see more game monsters derived from famous/infamous movie monsters.
So to see this shark creature is awesome, and I hope if anybody else points out and says "hey there is a movie with pretty much the same creature, RIPOFF", that you guys do not alter your creature and you stick with it...games need creatures like this. Not giant hulking dumb looking things which really aren't scary.

Wow, I just heard of this game.I can't believe it fell off my radar for 2 years. It's amazing how a game with such high production values can go unnoticed by some people (such as myself). Great to see it now.

Some awesome pictures. That crazy shark model at the end is awesome :D.

u cant fail with this awsome mutant shark thing. uve got one more tracker.

The shark monster is epic. Best monster seen in any game.

this would make an epic console game