Perliner world is fleshing out. Wind is blowing, grass is waving, and light spreads around. I was working on this for last months, see for yourself and try out soon. Build your own creation!

Perliner’s world is fleshing out. We have basic world generation, lighting, vegetation and building interface. You can fight enemies in a small world that this is providing to the player. It’s time to show that to everyone.

BTW, I’m planning to release the demo shortly. More details at the end.

I have developed a lot of smaller and bigger pieces since the last time. You will see it in the screenshots, too many to list in a short note. I won’t go into too much detail, but if one would compare the previous and current version, change is enormous. 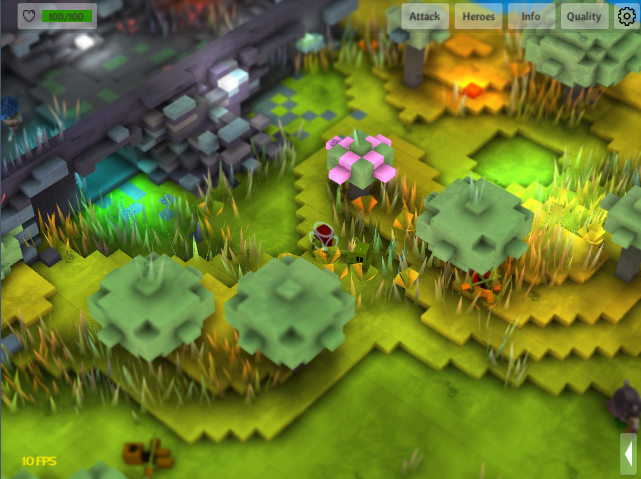 We have dynamic world that is constructing meshes when player approaches them, lights that can be created by player, though still not completely destructible. We have vegetation. For now only trees and bushes of different sizes. The player can operate on vegetation, mow grass and plant his own. Trees can be disassembled trees voxel by voxel. Because it’s a voxel game.

And last but not least, everything in the world can be altered or constructed. You can build, destroy, paint and light things. And fight, but only a bit.

You happen to appear in a new world. If it’s by teleportation, or spaceship crash, it’s currently unknown. 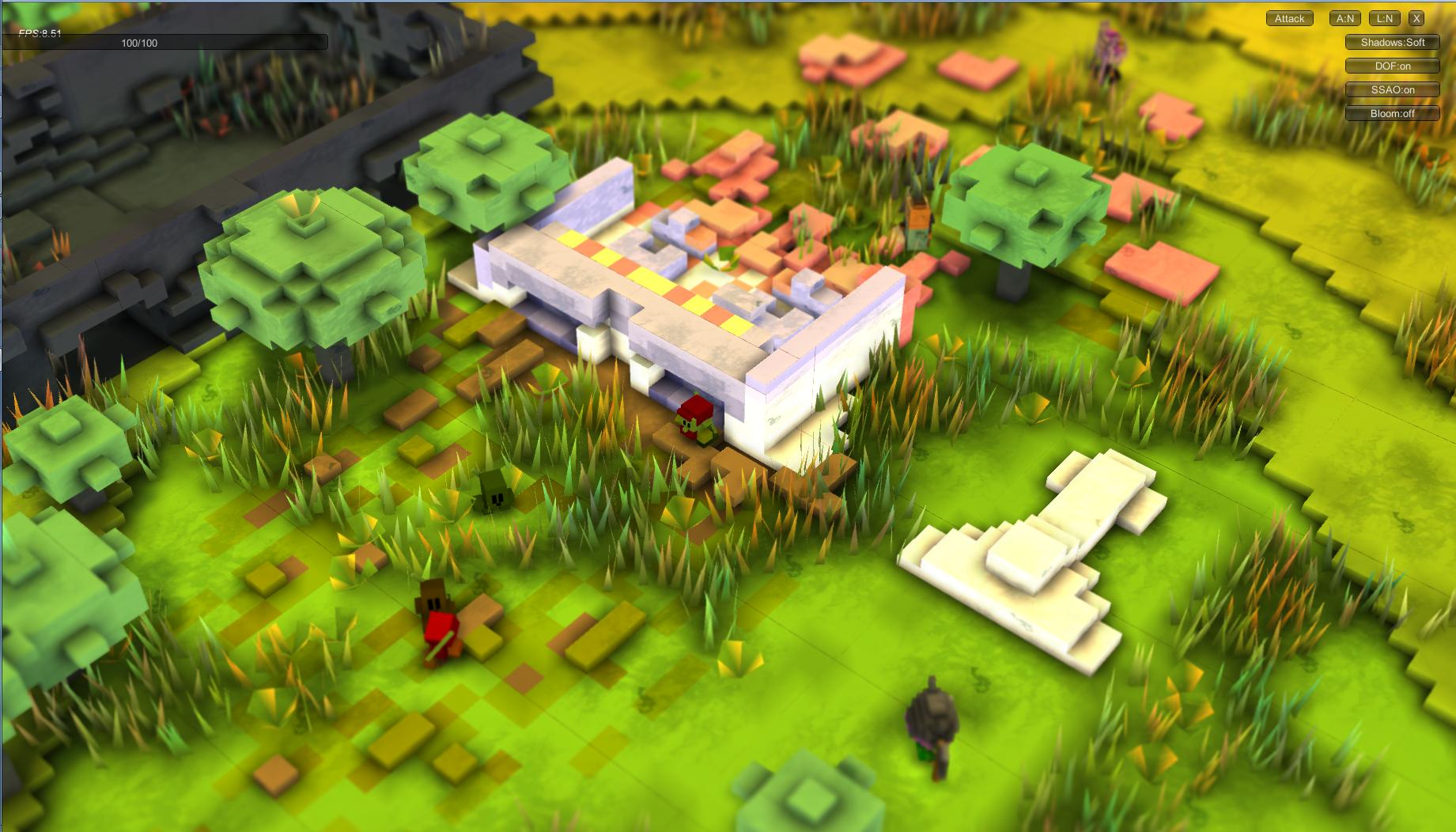 You may encounter enemies, but very few and easy to get rid of. These enemies won’t attack you unless you attack them. Nice guys.

The world is otherwise open to you. You may roam around, within it’s boundaries. You can construct roads, buildings, even fill the lakes with water, or dig and mine. 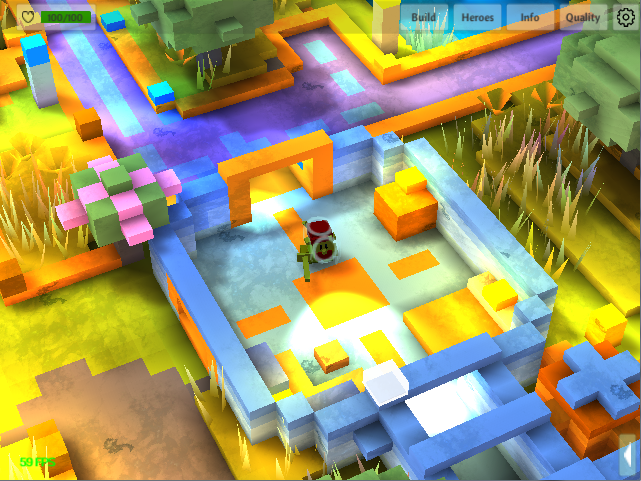 Disclaimer: To tell the truth, there is still no real water voxel, and any simulation is missing. It’s just colored blocks so far, you can alter them yourself with basically any way you wish. Kind of like builder’s mode. 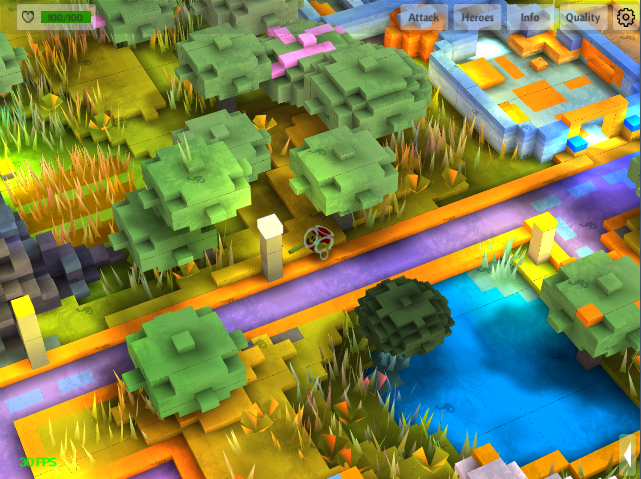 If you use Load option, you will arrive at a world already built by it’s inhabitants. They have constructed buildings, parking lots. You have lights on poles, streets with pavements, a small field nearby. There is also a pink lake of whatever mysterious liquid inhabits the area. 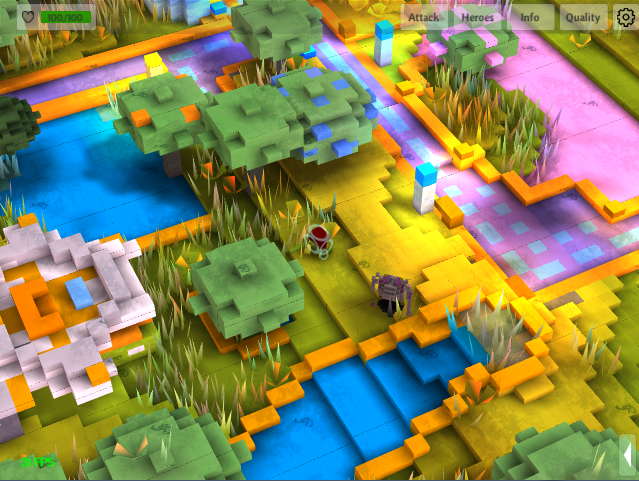 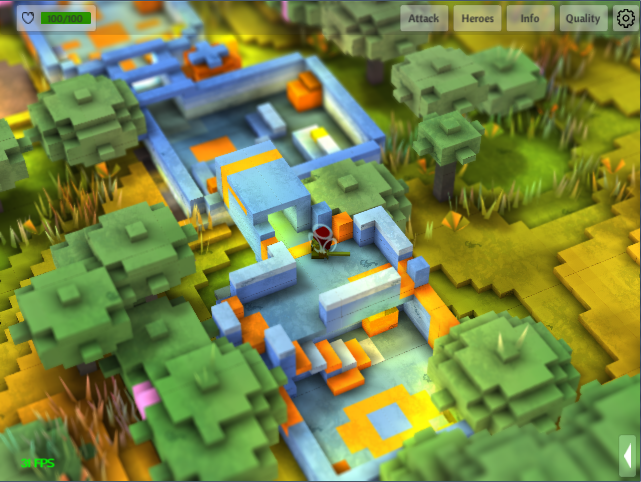 There is a bit of dungeons or mines in there as well, with strange vegetation and some lava. 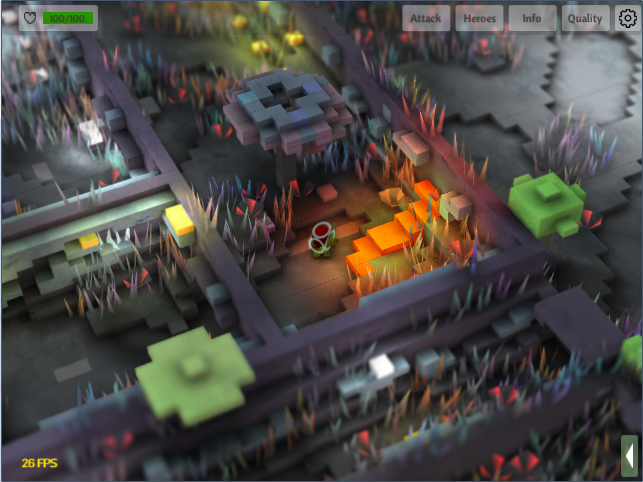 We have a couple of tools at our disposal. The camera works depending on the tool you have in your hand. If you want to roam and fight, you have the largest camera distance to enjoy the views and not get lost in the world too easly. If you want to tinker, the camera closes in. 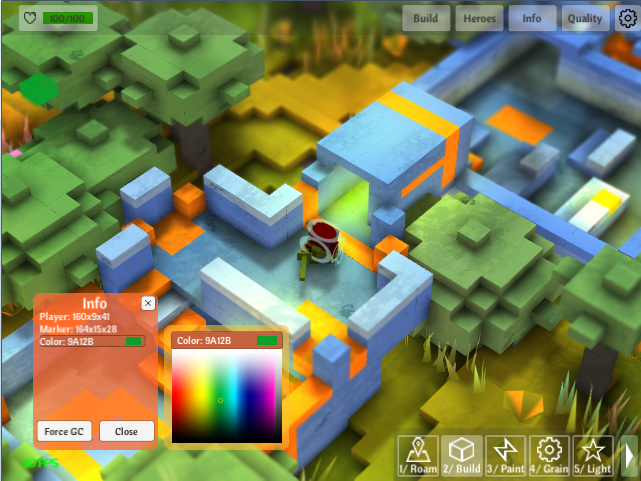 The UI is available, allowing player to change atmospheric lighting or color of the tool (when building, painting or lighting).

The tools that you have:

Some of the option allows two actions – first one with just a click (ex. Build), second with Ctrl+Click (ex. Destroy).

You have also Load/Save option available. The above screens are from the world heavily modified by the inhabitants (ie. me), so you may see immediately what can be done, but probably a lot more can happen in this tiny little world.

I’m planning to release this small world builder to the Internet after I fix some kinks, add a help screen so it’s easier to start. I hope you enjoy it, and critique is also welcome :).

I’m curious if you like the ambiance, the way it handles now. Is it too colorful, or boring, or you like it? Let me know! 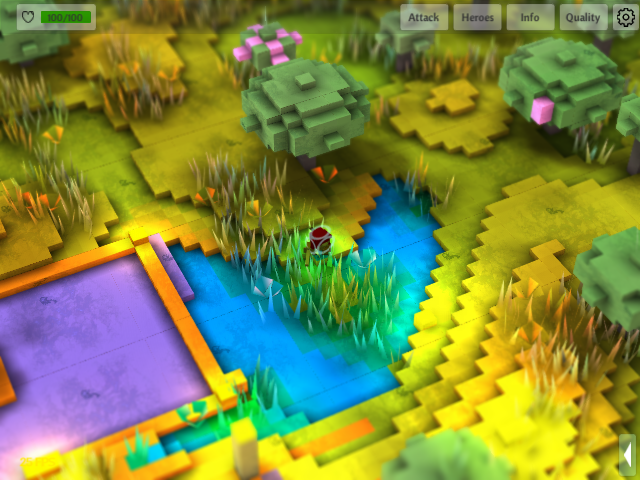 With all the creation ability, it's good that it wouldn't disappear. You will have Load/Save ability in there as well, so you’ll be able to save and share your creations with anyone. 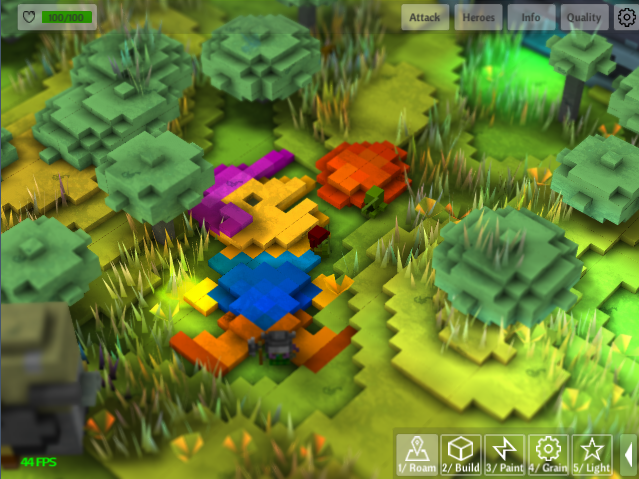 So stay tuned for the demo in the next couple of weeks. And don’t fall from the world!