An overview of the behaviour of one of Technobabylon's three protagonists 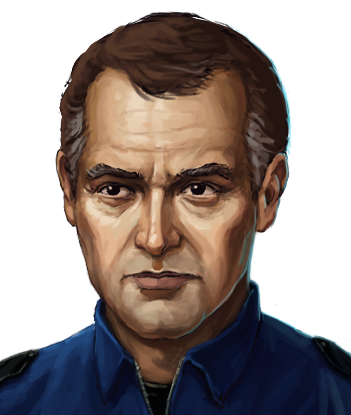 It would be an inaccurate and woefully understated view to call Dr Regis an unconventional case officer. His approach to work, involving a great deal of practical casework and the avoidance of perceived "dependence" upon newer investigative technologies available has been a continued source of friction with colleagues within CEL. The other major source of such has been, and remains, his attitude towards interpersonal contact. Rejecting otherwise friendly interaction (+/-11% Social Wellness Index) with other case officers, Dr Regis has a single-minded determination when it comes to his work, at the expense of most other areas.
One of few exceptions remains Dr Lao, who is apparently not only tolerating his work ethic, but has managed to improve her own output ratio through uptake of Regis' unorthodox approaches. Though it is possible to coach colleagues for adjustment to Regis' behaviour on cultural sensitivity grounds, his interactions with the public in the past month may be cause for concern. He is reported to have called an intransigent witness a "Lousy, [CENSORED]ing piece of [CENSORED]", and while not directly making any threats to citizens, these may have been inferred from follow-on statements. It must be taken into account that a successful outcome was eventually achieved, though this approach must not be condoned or encouraged among other case officers.
While this would initially appear troubling, prolonged research into his behaviour has found it inextricably linked to his turnover of successfully-resolved investigations. Previous attempts at corrective attitude adjustment have led to a correlated decrease in performance. His recreational activities outside of CEL, involving [REDACTED - E. Vargas, C:CG] are perhaps going some way towards ensuring overall stability, despite an attitude that may otherwise suggest that intervention were required. As such, it appears more prudent at this stage to keep him assigned with case officers with whom his methods do not generate undue conflict. A course of low-impact social-wellness treatment may be advised however, perhaps involving Dr Lao.
Recommendation to Sector Allocation, Emergency Logistics:- No disciplinary action- Schedule meeting with social wellness coordinator [OVERRULED - E. Vargas, C:CG]- E-mail regarding defacement of cameras (repeated)