Overhaul of player vs infected and PvP combat and Introduction of new weapons and food Items.

DayZ Update 1.12
Overhaul of player vs infected and PvP combat and Introduction of new weapons and food Items

We’re excited to announce that game update 1.12 has been released on Steam! Before we dive into the contents of the update, we’d like to take a moment to thank everyone on PC for participating in the experimental phase. This update offers plenty of changes in the game and your feedback during the experimental phase was very important to us. If you’re interested in a detailed rundown of the changes we made, head on over to the changelog forum posts (Link below) . And if you encounter any issues, we’d love it if you let us know via the Feedback Tracker. Now let’s take a look at what’s been changed and added!

We start with the most important part of the update - changes to player vs infected and player vs player combat. The scope of these is far beyond anything we’ve done before. Here’s a quick summary:

Infected are deadlier up close due to the increased frequency of their attacks and higher resistance against damage from melee. To counter their attacks up close, players need to use heavier weapons when trying to stun them. Their senses were tweaked in a way that makes them slower to react to nearby noises, making a stealth approach and stealth kills more viable. Infected are also more likely to leave their target alone if they lose it and they won’t attack unconscious players anymore.

A massive balancing pass was done over existing firearms, making them more diverse while keeping rarity in the world in mind. This primarily includes a focus on non-automatic rifles being stronger and more precise than automatic ones. We also overhauled the audibility so smaller caliber weapons are harder to hear from a distance.

The diversification of firearms also affects ammunition properties, which means we paid attention to damage to health, as well as shock differences between individual ammo types. This was also coupled with a major buff to protective gear with ballistic properties (selected helmets and vests), which now protects players a lot more from incoming damage to health and allows for more firefights to end in an unconscious state rather than instant death. - Read more from our article:
Dayz.com 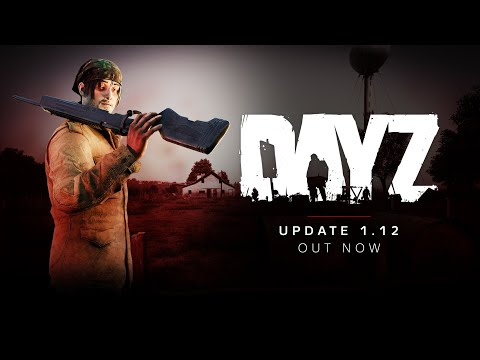 
Hello survivors! We’re excited to announce that game update 1.12 has been released on all platforms! Before we dive into the contents of the update, we’d like to take a moment to thank everyone on PC...


MORE ABOUT THIS GAME

We’re thrilled to announce that DayZ began the new year with a bang, setting an all-time record in January in average player count for the PC on Steam! We couldn’t be happier that so many of you are enjoying the game!

Our main news, however, centres around the release of 2021’s first game update, 1.11. A huge thank you to everyone who participated in the experimental phase of the update on both the PC and Xbox. For those of you who already checked out our changelog, you know that this particular update wasn’t focused on any significant additions to the game. DayZ is a complicated beast, and since we had a fair-sized backlog of issues, we decided to focus on bug fixes and improving the game’s stability instead. With that in mind, let’s take a quick look at what this update actually contains.

One of the things we looked at was how the infected collide with players during melee fights and adjusted it so that the infected no longer go inside the player’s character. Getting out of cars had proven tricky in the previous update as well, as some players were randomly teleported onto the car’s roof. This has been fixed and your feet now remain exactly where you’d expect them to be after leaving your vehicle. Sea fishing would also be interrupted at times, but we squashed that issue too and play should now be as smooth as the calm waters. Finally, we improved horticulture in a number of areas, including removing garden plots with the shovel and the infestation of plants.

One final bit of news –
paired with the update, we had a complete wipe on all official servers

. The wipe is meant to compliment the update 1.11 for a fresh start into 2021. It also secures us a clean foundation to monitor the changes made with previous economy updates. You can read our official announcement on the wipe here.

As usual, this article provides just a snippet of what is inside of this game update. If you are interested in more details, head out to our forums for changelog notes: Forums.dayz.com.

MORE ABOUT THIS GAME

Bohemia Interactive is excited to announce that Game Update 1.10 has arrived on all platforms! There are tons of substantial changes to this update, including the long-awaited return of the M3S truck. Along with a drivable variant, we’ve also added brand new static variants for partial spawning. On top of that, all vehicles now offer increased engine durability during collisions with the environment, as well as the option to repair the vehicle’s chassis with epoxy putty and the engine itself with a pipe wrench (unless your engine happens to be ruined). We also added player damage when jumping out of a car.

New shelters have been added! They come in three variants (stick, tarp, leather) and offer basic storage capacity, as well as protection from the rain. Speaking of the elements, cold mornings and warm afternoons are more realistic now, as are local wind speeds and altitudes. Furthermore, players can temporarily contain heat from fireplaces, the user interface now contains information about the heat insulation qualities of an individual piece of clothing, and heat insulation / maximum absorption limits for all clothes have been rebalanced, offering players a variety of choices regarding protection against the rain or cold.

Leg fractures are back as well, along with improvised fixtures (splints). Legs can be broken in all kinds of situations, including combat, stepping on a bear trap, falling or jumping from a great height, and even while jumping out of a car. Keep in mind that if you don’t fix a fracture with a splint, you’ll suffer limited movement, as well as frequent shock damage, which can render you unconscious. Visualizations of current shock values have been added (i.e. how close you are to unconsciousness), as well as when the actual shock damage is dealt. Applied splints are now visible on the injured player as well.

Rounding out the update, the signal pistol has returned and can light up the night sky in four distinct colors, the longevity of items has been lowered dramatically, and locked doors stay locked during server restarts, while the rest of the doors are randomized. Localization tweaks have also been added, including the introduction of localization into Brazilian Portuguese.

Finally, DayZ and DayZ Livonia will be fully playable on both PS5 & Xbox Series via backwards compatibility! Read about it here: Dayz.com


Bohemia Interactive is happy to announce that Game Update 1.09 has arrived on all platforms (08/09/2020). It brings a lot of bug-fixes and also interesting new stuff. The long-awaited Revolver is making its return! This very cool looking gun is chambered with six rounds of the strong .357 ammo within an internal rotating cylinder. In addition to this, we’re also adding one more brand new gun to DayZ - the Deagle. This beast of a pistol is available in silver and rare gold variants, features a nine .357 round magazine and fits the re-introduced pistol scope, to engage targets over longer distances.

Developers have also been working on some balancing of the durability of individual firearms, mainly aimed at lowering the durability gap between chambered and magazine based weapons. With this, we’ve also increased the durability of suppressors and removed the ability to repair weapons with duct tape along with their attachments. Keep an eye out and hold on to those weapon repair kits!

A new structure for base builders has been added - the flagpole. It aims to make base management easier by continuously refreshing the lifetime values of items and structures around. Meaning that you will no longer need to run fence by fence to keep them alive once you build and activate a flagpole in your base. Just keep an eye on how low the flag is, because its position defines how many refresh cycles remain. There are 27 flag variants; we hope you find your personal favorite.


Bohemia Interactive has added a new hunting rifle: the "Sporter 22". The rifle uses .22 ammunition (added to the game via the 1.05 update last year), comes with various magazines, and has the ability to mount a hunting scope. And speaking of long-range engagements, the Sway and Hold Breath mechanics have been adjusted, which should make distance shooting a bit easier.

New base building improvements focus on the balance-of-destruction of various structures, such as fences, watchtowers, and tent objects, and the update also includes the addition of the Canopy Tent, Indoor Fireplace (oven), and Direct Cooking Slots (fireplace grill for meat). Additionally, the update comprises general gameplay tweaks, bug fixes, and UX improvements.

Finally, 1.08 will bring an updated Saint Roman Ski Resort, Biathlon shooting range, and a race track to the ChernarusPlus terrain.
For a full rundown of details and patch notes, check out the accompanying changelog.

MORE ABOUT THIS GAME

The new 1.07 Update brings some important fixes and exciting new elements to the game.
We are adding the Repeater Carbine which uses .357 rounds, and the 12ga Rubber Slugs which can be used by any of your favorite shotguns.
This new update also focus on important fixes, from small gameplay tweaks to the inventory fixes that were affecting the players experience since the release of the 1.06 Update.
You will also be able to find the newly added Amusements Parks, which are scattered across Chernarus.

Watch the trailer, and read the patch notes below