Questions about the mod sent by Tom Francis aka "Pentadact" to us, answered by Dekrayzis with a little help. New attached screenshots taken for the article, and the full article.

1) Why did you choose to make a mod about Sonic the Hedgehog?
It wasn’t by choice. Originally it was just going to be a characters model pack, but after posting it on the old Atari forums I was asked by several members if I would make a Sonic mod. I originally turned it down, but after my email inbox got spammed by more than 300 people over the course of two months, I had to silence them somehow. Hahaha.

2) Why did you choose Unreal Tournament 2004?
I chose UT2004 due to the Unreal Engine capabilities. I was a big fan of the Unreal series for years; to create a Sonic mod was going to be a big challenge and I knew I needed a game that allowed you to modify it completely. Fortunately Epic Games is one of those cool videogame developers that gives you the tools they use to create their games with and that’s what is cool about Unreal Tournament.
You can add your own creations to the game, and it makes Unreal more fun to play, and extends the game’s lifespan. 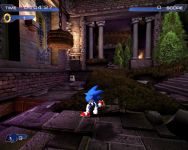 3) What do you think of Sega's official Sonic games? Is there some shortcoming in them that you wanted to address?
From what I have seen in the Sonic games is that it has always been colourful, clean and meant for children, and since Sonic Heroes the badnik enemies have changed drastically since the original games on the Master System and Mega Drive consoles.
From a poll I held on our website, a lot of the older generation of Sonic fans seemed to be annoyed with the current releases, mainly due to certain aspects of the gameplay and in the lack of story development. Sega can do only what they believe is best for their targeted audience and have to apply by certain rules within the company I guess. I haven’t played any of the recent games since the Xbox 360 version of Sonic the Hedgehog, as I’ve been busy with Ashura: Dark Reign and my time away from the computer.

4) What was the hardest part of turning a first-person shooter like UT2004 into a third-person platform game like Sonic?
According to our only coder on the team ‘Xaklse’, character movement was one of the most challenging things to be done; making Sonic pass loopings against the game limitations and choosing the optimal controls for high speeds is really hard. It took about 18 months (and 3 code rewritings) to finally get it to work; the guy is a perfectionist.
As for the level design, it’s not easy to create a Sonic styled level environment in 3D. Everyone knows Sonic is primarily about speed and getting from A to B in the fastest possible time. So to create the right look, having the right balance of eye candy, and keeping the player interested is a difficult task. That’s why we think the original Mega Drive games were so good. 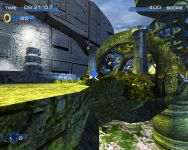 5) Have Sega or anyone involved in the Sonic series contacted you about the mod?
No one from Sega has contacted us at anytime.
Through the first year of development we did email Sega constantly each week for a response if we could have the go ahead to do the mod as we wanted to make sure we did not breach their copyright. We never got a reply. But we have always made it publically known that we are a non-profit making mod team, and that we are not associated with Sega or Sonic Team in any way or form.

6) How many people are on your team, and how long has the mod been in development?
We have approximately 8 people working on the team; this also includes voice actors and musicians. Officially, development started on the mod in March 2006; but I and another member of the team started researching the franchise back in August 2005 finding out what the fans wanted to see in a Sonic game and playing some of the games.

7) Roughly what percentage of work on the mod overall is now complete?
Much of the time has been spent on coding, making sure Sonic moves like he does in the official games. This has taken up quite a considerable amount of time because we weren’t sure what was possible with the Unreal Engine. To date about 20% of the mod is completed, there are many levels that still need to be worked on and a lot more custom content to be created. 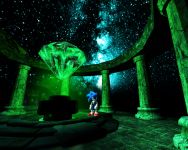 8) Is the story of the mod an original one by your team, or is it based on an existing Sonic game?
The story is an original one created by the team. We discovered that a lot of people wanted to see a much darker story for the Sonic character to be in and would like to see a return of certain characters and locations, not mentioned in the Sonic games or the comics for a very long time.

9) What do you hope to get out of making this mod?
Sleep and plenty of it. Seriously!!! Hahaha.
We hope that once the final release is out and up for download that we don’t disappoint too many people. Obviously we will, as people have their own expectations and usually forget that we’re amateurs at game development.

That's all for the interview. Dekrayzis scanned the article of the april issue of PC Gamer UK so that you could read it. It has some pretty dumb mistakes easy to notice.

Really impressive - wouldn't you guys rather be making your own, original IP for a platform game? I think the Sonic theme is interesting, but it's someone else's IP after all; there are very interesting things to do with such talent, creativity, and the unrestricted freedom of a mod team. Limiting yourselves to Sonic - no matter how much attention you can grab in the beginning - will soon wear off. Creating your own thing can be the start of something much bigger & better.

The answer is yes. I have a shelved project that i started back in 2004 that i am looking forward to working on, but as the demand for ADR is high. the project sits waiting for better tech to come out. With the unreal engine we have vast amount of freedom where other game engines we dont.

played this mod, it pwns :)

good to see it getting exposure.

The magazine says UT3 all over it, that's a pretty big mistake