In which a pause menu was finally added to the game, along with an option to skip past testing or race sessions, and in which the Chinese Grand Prix is drawn up.

It’s the last Saturday of January, and boy has it been a hectic, highly unusual month – certainly more than I’d bargained for. Anyway, I still got an awful lot done. This week, I hooked the audio settings into the game successfully, and built a pause menu, and then had enough time left over to make the Xingxiangxiong GP graphics.

The pause menu was actually a lot simpler than I anticipated, but I was a little bit lazy. There are no settings available during a race, because having the video, audio and keybinds change and still all be working perfectly in the middle of a race sounded like more of a timesink than I was prepared to commit to. 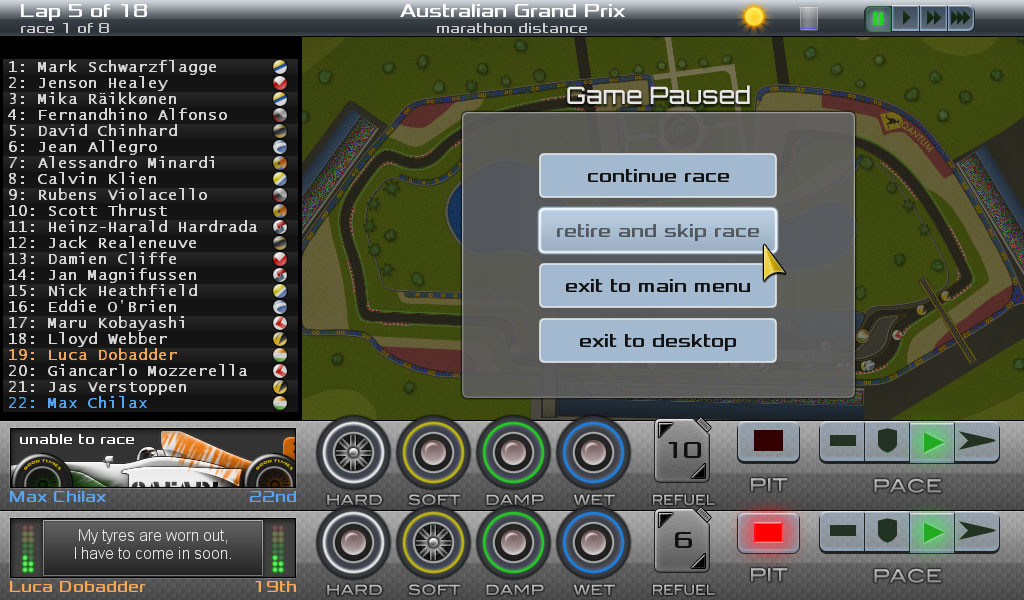 However, I did add a “skip” function. When demonstrating the game to people, I had noticed that novice players tend to have their cars retiring early, and then have nothing to do but twiddle their thumbs while the race concludes. Not acceptable. But skipping the race meant I would have to run a quick and dirty simulation of the remainder of the race – and to skip testing, I would have to run a similar simulation for hotlaps.

After spinning around in my chair for a bit, I decided that the most elegant solution would be to create a perfect car-type object, with maximum stats, and completely immune to any misfortune, then have that car complete a hotlap before testing/qualifying begins. That perfect hotlap then serves as a baseline for simulated hotlaps, with time added on for the imperfections of each car/driver, and then a little bit of random fudging.

There were a few issues getting the system to work, but a few minutes of chair-spinning later and I’d not only worked out the bugs, but tuned the system to generate lap times quite close to the real thing, as this picture shows: 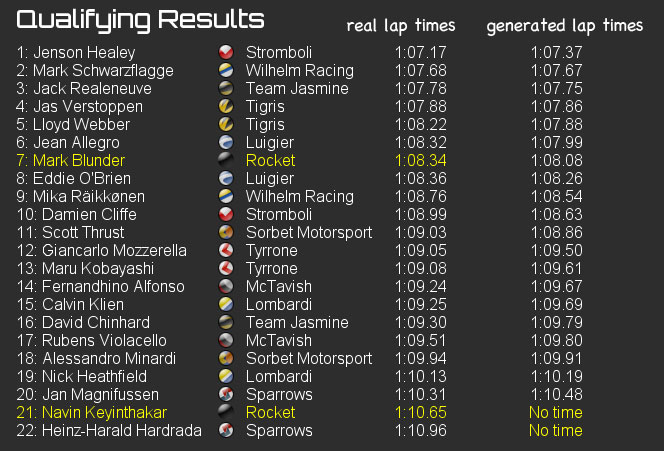 Having done all that, I thought it would be a good time to get some more content creation done, and made the Xingxiangxiong circuit. A fairly straightforward design, with lots of red and yellow for China’s traditional colours. There are some funny notices written in Chinese around the circuit, for which I’d had help in translation, from a rather likeable student chap I bumped into in Leeds last November.

And that’s all there was time for. Next week I aim to produce two more circuit graphics. One of them will probably be for the Russian GP. Vladimir Putin isn’t bribing or blackmailing me for this, no sir. He’s really a lovely, lovely, man, and I look forward to a future of not having Polonium poisoning.