Since the alpha release a few patches have been published to address some minor performance issues and glitches. We've also implemented a new lobby/creation scene, which also includes a revised user interface to achieve a unified appearance throughout the game.

Since the alpha release a few patches have been published to address some minor performance issues and glitches. We've also implemented a new lobby/creation scene, which also includes a revised user interface to achieve a unified appearance throughout the game.

This patch is loaded with several new game features and also includes some heavily revised back-end server architecture! The focus this year is to continue and build out the overall design, while constantly adding new game mechanics to make the game enjoyable.

This has been on the request list since day one and has finally been implemented! You can now right click on items within your backpack or equipment window to be presented with a context menu. This feature has also been added to certain interaction items such as trees & rocks and will be expanded further as new features become available.

For Example: The only action available on a tree currently is chop, however there may be other options available at a later date such as: climb, water, etc. 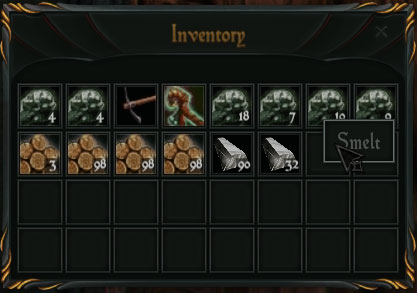 Since the alpha release I've been telling everyone to stock up on wood/ore as the next features implemented would depend on these two items. You can now right click on them and choose either: smelt or refine, respectively. Instead of making players sit in front of the machine and smelt countless amounts of ore, I've implemented a recursive system which constantly reevaluates skill gain, consumption and success rate on an individual stacking basis.

Instead of making players sit in front of the machine and smelt countless amounts of ore, I've implemented a recursive system which constantly reevaluates skill gain, consumption and success rate on an individual stacking basis.

For Example: Let’s say you have a stack of 99 ore and each smelt requires 3 ore to 1 ingot. Instead of smelting 33 individual stacks, you simple click once and the server performs the logical operations yielding the same results. This is reflected in skill gains, lost materials and successful smelts. 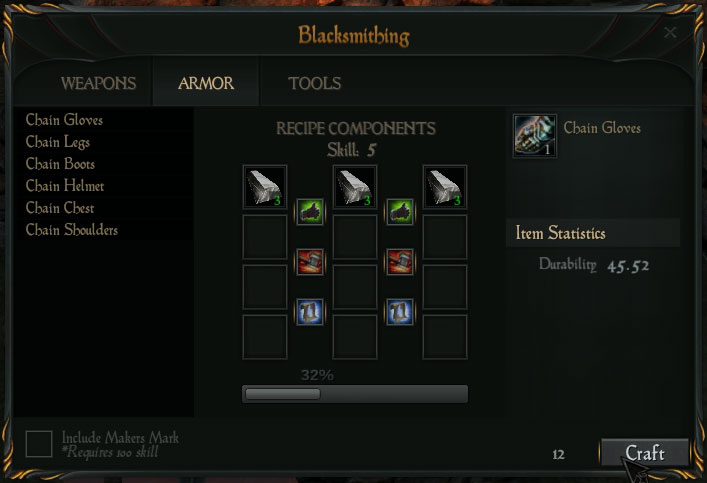 Now that we have all of this refined material we items to craft! Thus the first crafting interface system is born, blacksmithing. A lot of thought was put into this system to achieve a somewhat dynamic yet simple to use interface that would really give the player options in their design.

You start by choosing a category: weapons, armor, tools and then select the desired item you wish to construct. You are then presented with a standard template showing the minimum required materials and projected properties of the item.

Next to each column you will see three icons listed vertically these are the (optional) primary and secondary crafting boosts. You can choose one from each column and the options are: success, durability or magical properties. In order to select a boost it must have at least one material above or below the selection and additional materials are required for the creation.

Also someone who has a mastered this skill can inscribe their name on the items they create. This name will be present to anyone viewing the item.

For Example: The pick axe can receive either a success and/or durability boost. You cannot apply a magical properties boost, since the last two template item slots do not require materials.

The system before was dreadfully slow and rightfully so as I never put any logic behind the gain process. Now you will gain a lot faster and at a variable rate at lower skill level. As you progress and your skill increases the variable rate tightens and overall skill progress slows down.

This makes it easier for someone just starting out to get a handful of useful skills in a relatively short amount of time. However someone who wants to truly master a profession has to put a little more time and effort into the process to get those last few points.

I've been putting this off for quite some time simple because it was an “unknown”, I didn't know what would happen. However once I began implementing the crafting system, it was time to take the plunge!In my opinion any good client/server structure needs to perform validation and reference checks on both the client and server respectively. Up until now this was not the case and it took several weeks to revise the code. However the server is now 100% compatible with the Unity3D environment and can directly reference terrain, items, physics and database files.

This is huge! All look-ups are now performed through a shared binary database to ensure validation and item accuracy. Moving forward we now have the ability to create a server controlled physics engine for handling item movement or explosions. We can perform terrain and height validation on players server-side, sorry hackers. Best of all using the server engine on a graphics enabled machine allows for real-time viewing of the environment and players.

Since registration was opened we've had more than 2,000 registrations with only 1/3rd of those players actually downloading and installing the game. While I appreciate your interest in the game, the entire point of alpha is to extensively test the game as new features are implemented. Alpha is not an excuse to reserve an early spot with no intent on playing until release.

With that being said, starting February 1st anyone who has not signed in EVER will have their account access dropped to standard (no-access). After that moving forward you must sign into the game at least ONCE per 90 days in order to keep your alpha status active.

Alpha registration has also been closed and new applicants are by invite or special promotion only. However those players who maintain an active alpha account will automatically be permitted into the beta upon its release later this year.There is no open-beta enrollment planed outside of special offers.

We are growing and this year will be one of exciting new features and content expansions! As we continue to expand there are addition costs to be incurred, this is to be expected. This includes everything from additional hardware, licenses, models, music, sounds, etc.

If you would like to secure your account throughout the alpha, beta and even acquire some extra perks we have a few options available for you. We've started a GoFundMe campaign to boost production of this project and help cover some already incurred costs.You can visit the campaign here: Gofundme.comIt takes a lot to make an online game any and all support will be appreciated.