Changes that have been made in Dragon Gate v0.2.5.0

It's been a while since our last patch, but a lot has happened.

In the v0.2.5.0 patch we rebuilt our camera and movement system in preparation to introduce the combat system as well as fixing a large amount of bugs, removing redundant code and increasing the performance of the game by a huge amount.

- Performance Boost: The game was debugging twice due to a bug which we fixed. Although anyone with a high end pc didn't even feel this performance wise, players with a low spec pc really did. Low end pc's could only render up to around 5-10 fps where as high end would be at around 60 fps. Now low spec pc's are running at around 45-50 and high end are running at 65-70 fps.

- Re-Optimised shadows for actors: Numerous checks were being made in the code before a shadow was cast by actors causing a loss in performance by about 10 fps! We reduced the number of checks by removing various unnecessary code and as a result actor shadows are rendered at a much faster rate.

- Optimised shadows: Separate to actor shadows, shadows cast by scenery was, in some cases rendering twice, the player wouldn't have noticed since the shadows would be perfectly in line but it was starting to affect the fps rate in some areas of the zones.

- Re-optimised code for action bar texture: The action bar was made up of several textures, we blended them into one so the client didn't have to spend more time calling for multiple files instead of one.

- Disabled BumpMapping: We found several problems with the bump mapping system which was causing to much strain on the client for it to be worth having. We have disabled it until we can find a more efficient method of rendering bump maps.

- Optimised LOD: We found an issue in the code where models were being checked twice instead of once for if they are affected by lod.

- Disabled actor energy: We made an energy bar for player sprinting but frankly it got to a stage where it was just irritating so we removed it.

- Disabled actor Breath bar: Since the majority of our zones don't have much water in them it's seems to much of a hassle to fix this broken code at the moment. On top of that it was forcing the client to do constant checks to see if the actor was underwater.

- Optimised LOD distance for Static Actors: The render range of actors was very short to a point where it was annoying to see actors just pop in front of you. We have increased the range to something a lot more suitable.

- Disabled Mini-map: Our old mini map system was just plain bad. We are building a much more advanced and sexier mini map system although we have no idea when it will be finished.

- Optimised Light Rays: We found an error in the Ray code which was causing an artifact visual bug to occur. For some reason it was only players who had an AMD graphics card, players with NVIDIA cards didn't have this issue.

- Reduced intensity of Light Rays: Light Rays were some what blinding if you looked directly at the sun so we have turned down the Alpha setting so that they are still visible but much more realistic.

- Rebuilt character interaction window: This has been redesigned to meet the style of our upcoming combat system. (we are still working on the scale of it though, since it is a bit big at the moment) 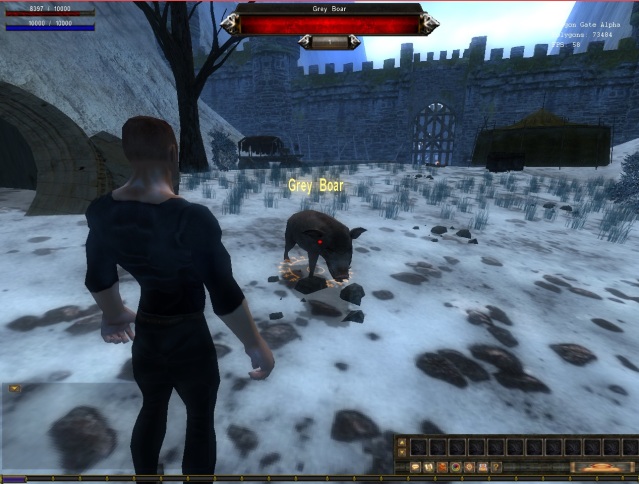 - Disabled scenery ownership: This feature was supposed to be an awesome feature that slowly turned into hell. The idea was so that players could buy land in games and become barons/baroness of each zones and enforce their own rules but the code is unfinished and was interfering with the rest of the game so the code has been disabled until we finish it.

- Removed Texture Shadow: Before introducing our new shadow system actors were simply a texture dumped under them.

- Removed Ctrl+Home Window: This window was made so that you could see the Fps rate, server ping, and vram usage as you were playing. The problem was by opening this window the performance of the game dropped so it wasn't a true reflection of what was going on. Fps rate, server ping and vram usage will eventually be able to be seen in a corner which can be toggled on and off via an in game command.

- Rebuilt Anisotropy System: Our original system, well... didn't work. No difference was made regardless of what setting it was set to. We created a new formula which works and in game textures are no-longer being blurred making everything look a lot more refined and HD. The player can set the Anisotropy to x0, x4, x8 or x16.

- Added Shadow Fading: Shadows are rendered to a certain range from the player and originally in some places the player could see where it would just cut off. We have added in a fade in effect on all shadows making it look like the shadows are constantly rendered. (see videos for example)

- Added 3rd Colour to Name Tags: Originally actors either had a green tag or a red one depending on their aggressive state. Now allies have green tags. Neutral targets have pale yellow tags and aggressive targets have red tags.

- Added base code for Multi-threading: Multi-threading is something we are working very hard on getting to work. By being able to render across multiple cores instead of one, will open more door ways for new graphical features.

- Re-binded Windows Keys: We have changed what key opens what window as the original settings were interfering with our new movement system. In the future, these keys can be re-binded by the player from the options menu.

- New Camera System: Since our combat system is very much a more action based system rather than button mashing we wanted to make the camera seem up-close and personal. It is very similar to the camera style of games like Mass Effect where it is looking over the players shoulder but not to close that vision is limited. The angle of the camera is locked to the cursor which is locked to the center of the screen. This means that the player can look around by moving the mouse while still using the WASD keys to move around. When a window is opened for example the cursor is released so that the player can actually interact with the interface without the camera going nuts. We also added feature where pressing Mouse Button 3 will snap the camera back to it's default position behind player. (a video demonstrating what we've done will be uploaded soon.

- Fixed Bug where text wasn't loading colour instead it was just coming up as white.

- Fixed Bug where if the player was underwater or on a mount they wouldn't cast a shadow.

- Fixed anisotropy bug where it was being rendered at x16 regardless of the value selected in the options menu.

- Fixed Bug where actors were sometimes falling through scenery

- Fixed Bug where 2 actors were spawning instead of 1

- Fixed Bug where textures were being tiled in windows created via script.