Changes in the game since last update ten months ago. Yes, I'm still alive, thanks for asking.

Hey! Reporting in for the yearly article about the game.

The game looks exactly the same as before; most changes are little details rather than inmediately noticeable things, but as small as the changes are, they add up, and I think that overall the game feels better, I'm actually liking it. One little step at a time, I guess... 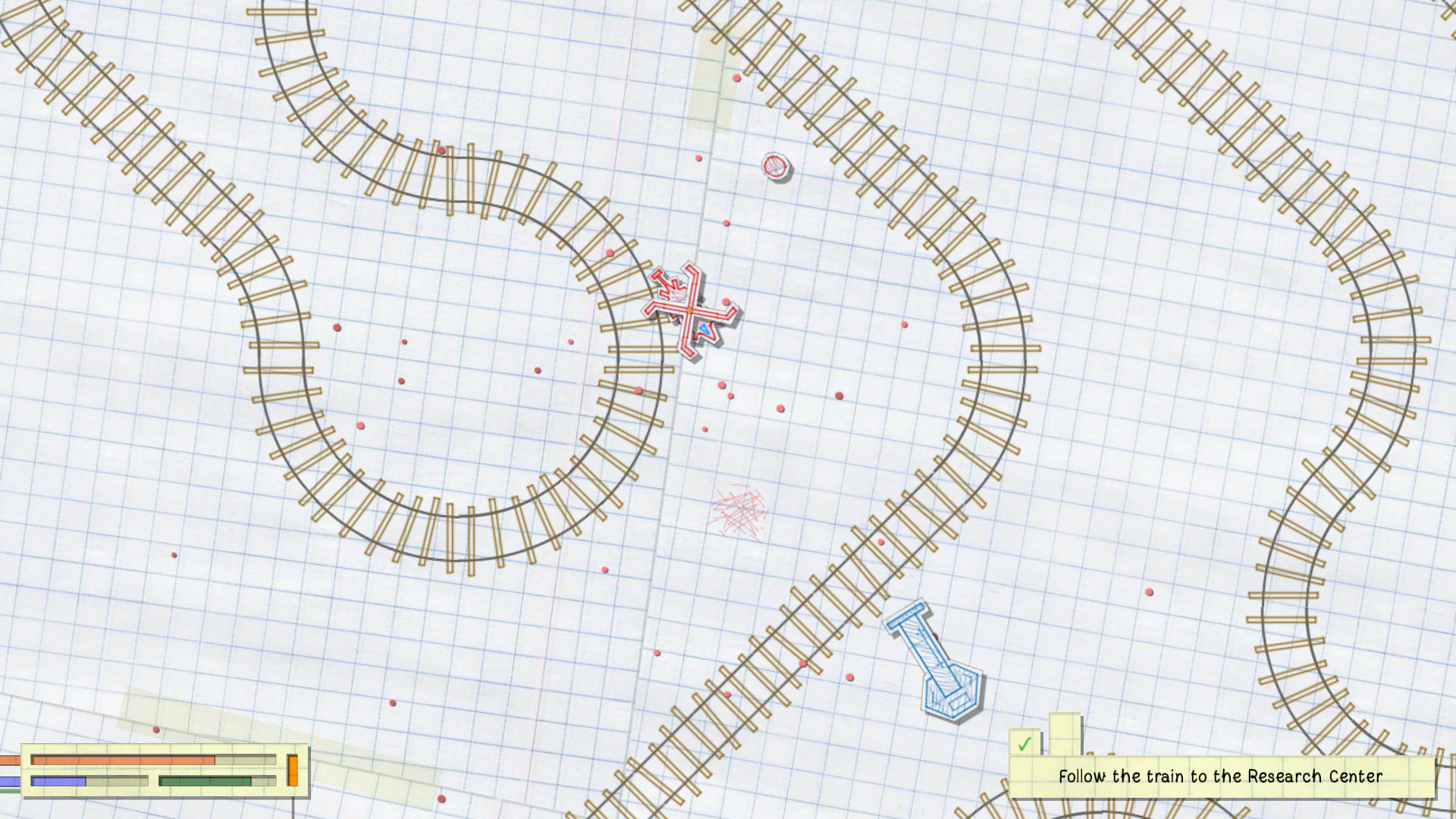 So, what has changed in the last 10 months?

Remember when I said that the game originally was meant to have 5 missions but then it became 6 and then 8? Of course you don't, because I said that like a decade ago.

The original idea back in August 2015 was to make a very short game, so 5 missions seemed appropriate: a tutorial, then a mission for each of the three characters, and finally a climax where you use all three characters at different points. Short and sweet, the game probably could have been completed in 20 minutes, maybe a little more if you watch the short cutscenes before and after each mission.

I eventually made that tutorial mission, but I figured out that it was too long, so I split it in two, meaning that the game would have six missions. But wait, wouldn't be neat to have some sort of prelude mission that plays BEFORE the tutorial, just to get the feel of the basic gameplay? Okay, seven missions won't hurt. But WAIT, what about a mission IN SPAAACEEE?!!. Fine, eight missions... Oh, but wouldn't be neat to have bonus missions as well? Fine, whatever... Oh, and what about some main missions that are told from the perspective of the bad guys? Uuuhhh...

There's a negative term used in project management called "scope creep", which means adding more and more stuff to a project that's already on the way, increasing the budget and completion time, and this is exactly what is happenning here, but to be honest, I don't see adding more content as something inherently bad in this case, because first, I'm not on a budget, I'm just making this as a hobby, and second, each mission added makes the time cost of all missions lower on average, as I already got a workflow going.

Making the first mission is always the hardest, because you don't know what you're doing, you need to set the tone, the art-style, the gameplay loop and many more things, but after that it's just a matter of repeating what you did the first time, with some variations. I mean, I still don't know what the hell I'm doing, but at least I'm a little more agile at whatever needs to be done.

So, current mission goal? 10 main missions with 3 bonus ones. I like the numbers because Urban Strike, the game which I'm taking inspiration from, also had 10 missions, with 3 on-foot sections.

I was going to write another essay about this, but I realized I already wrote enough with the previous point, so I'll just let the GIFs do the talking. Here's before and after, respectively.

This was pretty fun to code. While it doesn't look like a very significant change at first glance, it does get crazier when there's a lot of enemies and buildings on screen. The little circles stay on the map forever, so it's nice to go back to a location and see all the cellulose-induced destruction that you have caused.

From the very beginning I wanted to have three playable characters, each one with a primary weapon and an overpowered secondary. I already had the idea of the primary weapons for each character, which are pretty straightforward, but I was having a hard time getting ideas about the secondaries.

Months passed until one day I had a sudden Strike (heh) of inspiration for all three weapons. Here they are, but keep in mind that they are still prone to change:

For Green, seeker missiles, which were a pain to code:

For Blue, a melee charge or something, honestly I have no idea how to call it. I wanted to call it Kaio-ken, but I don't want to get sued.

For Red, a freeze ray, which is not the most spectacular looking power but it's very useful nonetheless.

How do the secondaries work? You use them, and then have to make 10 kills or so to recharge it.

At first, it automatically recharged after a few seconds (as seen in the videos from the other posts), but this was prone to abuse: use the secondary, wait a little bit and use it again, so I decided to change it to recharge by kills to force the player to be aggresive.

I know that a weapon that recharges by kills doesn't make much sense, but hey, it's a game about magically moving pieces of paper, the whole thing doesn't make sense.

All my life I've been sedentary as hell, so I bought a cheap bicycle last year. I started going on little bike rides a few nights per week, all good, but one night I think I rode too much and on the way back home I passed out. The only thing I remember is being on the ground with my bike next to me, and some random dude asked me: "hey, are you ok? Your face looks fucked up!". I came back home around midnight, went to the bathroom and I saw in the mirror that the right half my face was completely bruised and bloody.

Next day at work was interesting. I told everyone that I got into a fight with five dudes at the same time and I beat them all. I don't think they believed me, but they laughed.

I guess that was a wake up call. I was terrified of using the bike again, but eventually I started riding every sunday, and now I can ride for two hours just fine. I also bought a treadmill, and I'm slowly improving my stamina. Overall, I'm feeling physically better.

This had nothing to do with the game.

Now I can save the game in the middle of a mission, so if you die, you don't have to do the whole thing again, including waiting for instructions. One could argue that this is a "bad" thing, as it makes the game easier, but the game is not only about shooting stuff, but also about traveling around the map (which can get quite big) and reading dialogue, so it's just frustrating to do those things again after dying. It's not skillful, just time consuming, so checkpoints help alleviate that.

In the Strike games you had three lives to complete each mission, but no checkpoints. In this one, you only have one life, but some checkpoints. I think it evens out, although I'm no mathematician.

I also made other things besides of what I mentioned, but I'll better leave them for another day, as this post already is too long.

As of now, I'm working on a gameplay video, hopefully I'll finish it by next week. For now, here's a little sneak peek: (Click here for the HD, 60 fps version: Gfycat.com)