This is the second installment to the design pieces. This one takes a look at the guns in Party of Sin.

First off, if this is your first time on our site, please check out our about page to see what we are all about. You might even want to check out our first gameplay video as well.

This post is another installment of the design pieces from the Party of Sin dev team. We have decided to talk about the process we went through when designing the guns in Party of Sin. It was actually trickier than you guys would think. The reason why this process was actually difficult to do was because “Shooters” have been and are still getting so much flak for just being “shooters”. This is an issue entirely on its own and, if I feel like, which I probably will in the near future, I will post a nice rant about it. In the meantime, this is the process we went through when designing the guns.

During the first stages of the game, Party of Sin only gave the players control of three weapons: the standard crossbow (all players start with), shotgun and grenade launchers. We thought this was awesome. A nice diversity of guns in the game, simple, easy to use and obvious. However, things change. It turned out three guns didn’t quite cut it. Why not give the player more options, more choices and more diversity. Liz Hollerman first wanted to give the player the ability to pick up and throw grenades but that would require adding another button the player would have to press and thus bringing the total up to six (way to much). This then gave Vince the idea to start coming up with ideas for guns, and more guns. Kind of like that scene in the Matrix when Neo gets a program written to have as many guns as possible. 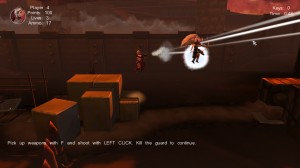 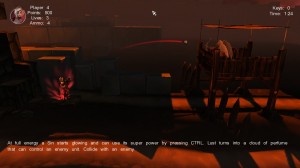 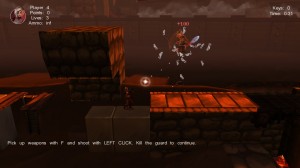 The crossbow turning an angel to feathers.

*All screenshots are courtesy of Hell1, the first level in Party of Sin, which acts a tutorial for the players.

The first batch of guns that Vince came up with were the following. (The number in front of the game indicates the amount of shots)

Another cool idea, which ties into the design philosophy of having memorable moments in each level/world was implementing world-specific weapons. By having only certain guns available in specific worlds allows for one more memorable moment, for the player, in that world. It is important to note that a game cannot be made around the uniqueness of individual guns or on counting to make the game fun. What it can do is add unique content to the game and change certain dynamics. For example, if the player goes out of his way to find the machine gun, he will have a different experience then if he went into a fight with just his crossbow. The additions are somewhat minimal but critical none the less.

Just got distracted with a heated conversation about Fallout: New Vegas. Anyway, to continue along the thought of having world specific weapons, it was also important for us because it would allow the player to control world-specific elements like wind in Earth and tar in Purgatory. This is sort of a sweet revenge for a player as they can now blow enemies in hole with the wind shotgun or sink them with the tar gun.

1. Crossbow
Fires arrows in quick succession.
Has some aiming error.

3. Grenade Launcher
Fires a gravitated ball that bounces off walls. Explodes when it hits an enemy or after a certain time.
Ammo: 6
Firing speed: Slow
Bullet speed: Average, Gravitated

9. Needler
Fires crystals that stick themselves to the first thing they touch.
Low damage is dealt on impact.
Crystals cause a small explosion after a short amount of time.
Ammo: 12
Firing speed: Slow
Bullet speed: Fast

15. Holy Beam (Unique to Heaven)
Charges up and locks aim for a short time, a glow appears on the ground where the gun is aiming.
A holy light beam strikes down on that location for massive vertical damage.
Ammo: 5
Firing speed: Very Slow
Bullet speed: Charge Up, Instant

This is where we currently are with regards to guns. We will moving to a more video oriented platform by profiling weapons in 30 second video clips instead of just writing about them. If you haven’t done so already, sign up to our forums to join in on the development.

All feedback is welcome.

HORY SHET!
If this gets on steam, I'll pre-purchase this on day 1!

BTW, what are your plans for multi language support? I can help with Finnish subtitles. Already got one commercial game under my belt. (Zeno Clash)

Cool! We could certainly use more localized versions of the game. We'll get back to you when we start translating.

looks great! love how your weapons are designed!

It looks good overall, though I hope you realize you need more anti aliasing than you could possibly ever know. :P

those guns have an awesome design <3