The second to last article in the design evolution series! Enjoy it my friends!

Hope everyone had a great July 4th weekend! Before I start on our second to last post on the design evolution pieces, I would like to give a big thank you for the comments last week on Lust’s post. It was so insightful that we are in the process of making changes to the original Lust. However, I’m going to give The Mr. Z a special thank you for posting his feedback on the forums regarding the other sins and some gameplay mechanics as well.

This week’s design evolution piece will focus on Greed. The theme behind this character is pretty obvious but we through in a curve balls that you probably will not expect. To start things off, unlike our other characters who were first conceived by Dan Williams and then passed on to Tobias, Greed was completely Tobias’ doing. He basically hit the direction we wanted for Greed right off the bat. 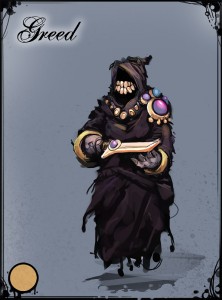 As soon as Greed hit the forums, our team was super excited and we were ready to get moving on the modeling. It is safe to say that not one change was made to Greed though the production process. Unlike Envy, Pride and now Lust, Greed had absolutely no evolution.


The full-bodied cloak with the jewels on his shoulder is reminiscent of a nobleman from the Roman times. However, to give him an evil edge, the robes were torn and his face was blackened. The color swatches for Greed were gold, black and purple. The gold was used to represent his desire for wealth while black and purple were used to make him look dark. Greed is also the only sin that floats. This is because he his not a physical being but rather a spirit.

As promised early in the article, I will divulge what the curve ball is. Firstly, it’s important to note that all the Sins except Greed possess a special attack and a special power. For example, Gluttony has Chomp and Lust has Stun (these will be discussed in more depth in later pieces). However, Greed does not have a special attack, per se, but rather a special ability.

Greed possesses a hook shot. Yes, people a hook shot! Okay, maybe it’s not that big of a climax but while all other Sins are deemed “fighting Sins”, Greed is considered a “support sin”. Those of you who are thinking: “Ha, who is going to play Greed, he’s for sure the weakest of the bunch” should definitely hear me out before jumping to conclusions.

The primary roll for Greed will be for solving puzzles. It is important to note that Party of Sin is a shooter first and a puzzler second. After experimenting with Greed, we’ve already designed over a dozen puzzles worthy of being shipped. The second element a hook shot brings to the game is the unique interactions that occur with enemies. For example, in the later game, players will encounter shield angels that must be outflanked to be killed. However, Greed can steal the shield from the angel and render him useless. Suddenly, Greed isn’t that weak anymore!

Please view Greed’s bio or leave a comment on our forums.

Since Greed's Theme Song is already approved, why not post it?

Interesting twist on how it plays out. As for the tactical downside to be present one can assume is that Greed will be able to get further ahead than everyone else and nab loot while they still fight?

That's exactly it, half the things we learned from Greed were only discovered once we played around with him in game. He's my favorite character from a gameplay perspective.